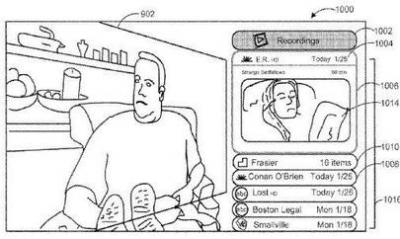 A new patent application published by Apple today reveals that they have done considerable research into the possibility of an Apple-branded Digital Video Recorder (DVR). The Tivo-like device would offer the ability to tune into television channels, record and playback shows. The currently shipping AppleTV does not support any sort of recording or tuning functionality.

Of most interest is that Apple appears to be looking into ways to integrate their iPod or iPhone into this experience. They describe and picture an iPod-like device that would dock to the DVR. Customers could then sync their recorded television content with their iPod and also select future shows to also be recorded from the portable device. Once syncing takes place the future shows are added to the DVR's recording queue and new shows are transfered to the iPod.

The patent application was filed originally in October of 2006, so Apple appears to have had this technology in the labs for some time now.

This would be a device that I would buy in a heartbeat. I love the idea of programming your DVR via an iPod Touch since it is aready equipped with WiFi. And I also like how they use the iChat video conferencing view when working with the on-screen menu. Still lets you see the entire show while searching through the menus and guides. Could be a snazzy setup.

hmm, that's funny. Seems like apple is committed to the concept of itunes being your source for content. Having an apple DVR would fly in the face of that strategy.
P

It's about time. But how much will this cost? I'm thinking there'll be a per-minute or per-episode fee attached, if it ever get released.
D

Although cool. Would this not cut into their already meager TV sales?
S

QCassidy352 said:
hmm, that's funny. Seems like apple is committed to the concept of itunes being your source for content. Having an apple DVR would fly in the face of that strategy.
Click to expand...

I feel like they'd have to pair up with a cable company though -- most people who have DVR's now get them through their cable company / dish company, right?
P

...and is that Kevin James illustrated in the abstract? LOL

This is the coolest thing ever - But I can't see it happening. It would cut into iTunes sales, and where would the profit be generating from? (Although if this was integrated with AppleTV, then EVERYONE would be getting one).

phased to this universe

... and I just bought the archos 605. Don't get me wrong, I like the unit and video looks great on the small screen, but on our 46" Sharp LCD the recordings look a little on the old VHS quality side.

I tried to wait for Apple to update their Apple TV but without the recording option and without a wider range of programming (Canada iTunes) I had been holding off.

If, and that's a big "if," this dvr service is free with the purchase of an

tv or even a mac with a tuner, then this is brilliant. I would buy an

tv today if it offered this functionality. Seamless integration with putting recorded shows on my iPod touch... would be awesome. I would then be more likely to make rentals and purchases once I had the

tv, helping Apple's revenue. I think this would be awesome.

P.s. - these patents need a new illustrator. One that's not on drugs. Or at least one that's on better drugs, not acid.

This obviously wouldn't work. I mean, look how unhappy the people in the patent drawing are.

MacRumors said:
The patent application was published originally in October of 2006...
Click to expand...

Don't think we would see the NBC on iTunes portion but this looks very interesting.

Great. And we need it in Europe -- as we have not a single movie to rent on iTunes.

Wow! Cool! Make this work with Apple TV (oh please) and I'll be a very happy camper! I love my TIVO, but would love to add a tuner to my Apple TV and just have that be my video hot spot!

BTW... the other poster got it right... darn the people in the drawings look like they're going to puke! LOL!

Finally, I was waiting for this... I was really hoping they were gonna push this feature in a Apple TV.

I am hoping that they integrate this so I can have one nice clean product by apple for my home entertainment.
D

I would love to have this too, but PLEASE, if you make it for

TV then PLEASE give

TV for video b/c I do not now have nor do I plan to get an HDTV until my tv breaks (hopefully several more years); even then I won't like it.
B

smkmn13 said:
I feel like they'd have to pair up with a cable company though -- most people who have DVR's now get them through their cable company / dish company, right?
Click to expand...

Yep and they all suck (expect Tivo). The only thing I like about my DirecTV DVR is that the quality is exactly the same as the broadcast and that it can record a lot more shows than I could ever watch. Other than that it's buggy as crap.

I would love to buy an Apple DVR. My only worry is that it wouldn't work with Dish services (I hate cable).

TV viewership in America is down by more than 2.5 million this year compared to last.

Apple would have to hurry up and release this device before everyone stops watching tv all together.

Conan OBrien, host of the acclaimed Late Night with Conan O'Brien with shows like The Simpsons and Saturday Night Live on his resume, is a man who knows a thing or two about television. A year or so ago, in an interview with Charlie Rose, he said that he felt we were now living in TVs Golden Age. The writing was better than it had ever been, the production values were excellent and the acting superb (special mention: Hugh Laurie as Dr. House). And yet, recent estimates suggest that TV viewership in America is down by more than 2.5 million this year compared to last. What happened?

Is it a lifestyle change? Is it the effect of TiVo? Is the brilliant writing too brilliant (the old The viewer is an idiot and this here edjikated stuff aint gonna work argument)? Are concerned parents restricting their kids access to TV (I shake my fist at thee, Janet Jackson!)? Is American Idol the last big hurrah before the Apocalypse? Are people so befuddled by the springing forward of Spring Forward that theyre all standing outside their homes in the unexpectedly early extra hour of daylight like bears outside their caves in spring?

These are all questions that have been asked and obsessed over, especially as this news comes slap bang in the middle of sweeps month  kicking networks right where it hurts the most  their bank account.

But as a person who spends a lot of time on the Internet, Im surprised at the tiny number of people whore looking at the effect of the Internet on these numbers. After all, an increasing number of people now choose to view the shows they want online instead of living their lives in thrall to the networks' time schedule.

The Internet has been striking terror into the hearts of execs everywhere. While people in other industries have had to deal with things like leaked emails, tell-all blogs, and hacking, the entertainment business  from books to movies to music to TV  has had an entirely different problem on its hands.
M

Otherwise the patent does sound pretty nifty, give it the option to wirelessly stream the content to an iPhone or touch and you have a winner. Super bonus points for having it stream recorded tv to specified devices over the internet too.
R

QCassidy352 said:
hmm, that's funny. Seems like apple is committed to the concept of itunes being your source for content. Having an apple DVR would fly in the face of that strategy.
Click to expand...

I am not so sure. If DVR gets more AppleTV boxes into people's homes because DVR is a need people have (or think they have) right now, and then helps to augment or encourage their use of iTunes for increasing amounts of content, I would say that it very much aligns with their overall strategy.