Apple has begun running a pair of new television ads for the iPhone 4S and Siri featuring actor John Malkovich. This comes after a pair of celebrity ads started running last month with Samuel L. Jackson and Zooey Deschanel.

As a huge fan of Apple's advertising, I hate the SIRI campaign.

Apple is best at tapping into the HUMAN experience; not indulging in celebrities talking to "a robot"... an application that most of us know rarely works to begin with.

Zoeey Deschanel asking her phone if it's raining outside!?!? Really?!?!?

I miss the Get a Mac campaign. 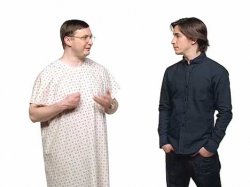 This is Apple saying to the competition: Can you do this, punk? Well, can you?

These aren't well-formed queries, but Siri handles it because it learns your ways of talking. This is Apple showing the world how much more fun (and less work) Siri is than any other "voice recognition" engine. Siri is so much more than just that.
S

This seems like a post-modern critique of Siri more than it does an ad. It shows a listless man, alone, talking to a robot about rather inane things. It's actually quite interesting as a piece of art. Just like the one with Zoey Daschannel, had the tone been darker, would have been a rather sad (in a good way) piece of art (a woman who can see that it's raining asks her phone if it's raining—if that's not black humor I don't know what is).

I have to mute the Sam Jackson ad because I don't know of anyone else who cools their gazpacho using ice and who would wait an hour to do so or would need a reminder to do so. It's too vexing to hear over and over.
S

Anyone else happen to think of this?

"Fitter, happier, more productive,
Comfortable,
Not drinking too much,
Regular exercise at the gym
(Three days a week),"

I liked the ad.. I'm a big fan of John Malkovich..

truly it was a bit creepy...the background music didn't help much either.

CrAkD said:
There's 2 I just saw 2 different ones during the celtics game
Click to expand...

Both are online now at Apple.com http://www.apple.com/iphone/videos/#tv-ads-joke

rawdawg said:
Remember when Apple made desktop computers? Yeah, those were the days...
Click to expand...

I take it you missed the thinner MacBook Pro rumors?
R

Remember when Apple made desktop computers? Yeah, those were the days... Now it's iCrap, celebrity ads, and publicity.

In 10 years Apple will be no different than the behemoth it originally set to be better than. Gotta love shareholders.

I liked the ad with Zooey in it, and the other guy too, but not this so much...
A

These two newest ads aren't that great... At all. Like someone else said, creepy.

The first ad seems to be a "dramatization" and not something Siri would actually say in response to the cue in the ad.

Bring back Mac and PC to argue over how the good old days didn't involve stealing ideas like the current phone wars, then clarify it is (/sarcasm).

I don't get the "two iPhones walk into a bar" joke.

rawdawg said:
Remember when Apple made desktop computers? Yeah, those were the days... Now it's iCrap, celebrity ads, and publicity.

In 10 years Apple will be no different than the behemoth it originally set to be better than. Gotta love shareholders.
Click to expand...

ventro said:
I don't get the "two iPhones walk into a bar" joke.
Click to expand...

Might be in regards to the two iphone prototypes that were left in bars.. Possibly?
T

"I have a drinking problem? You're Mormon. Next to you, everybody has a drinking Problem".

Up next; Kevin Smith.
S

Dekard said:
Might be in regards to the two iphone prototypes that were left in bars.. Possibly?
Click to expand...

I've always thought this as well. . .