Apple shared the installation statistics on its App Store support page for developers, which was updated today.

iOS installation rates are being broken down in a new way. The 53 percent statistic applies only to devices released in the last four years. Amid all devices, 50 percent are running iOS 12. 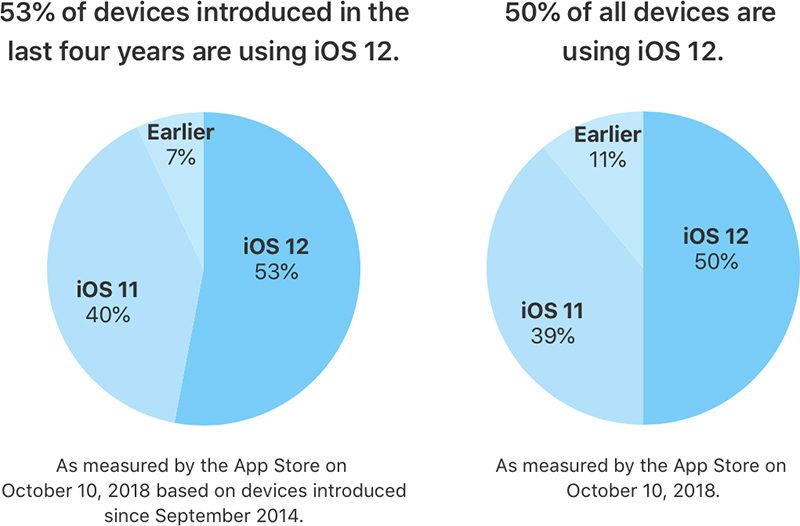 Apple's data is in line with iOS 12 adoption rates that we've been monitoring from analytics site Mixpanel. A week ago, Mixpanel suggested right around 46 percent of devices were running iOS 12.

iOS 12 adoption has outpaced iOS 11 adoption rates at the same time last year. In early October of 2017, iOS 11 was only installed on approximately 38.5 percent of devices. It took until early November for iOS 11 adoption to hit 50 percent, based on Apple's official numbers.

It is not a surprise that customers are choosing to install iOS 12 at a more rapid pace given the speed improvements introduced with the update. On older devices, performance enhancements can make iPhones and iPads feel much faster.


Subscribe to the MacRumors YouTube channel for more videos.​
Apple has made animations smoother and more responsive across the operating system, so accessing Control Center, scrolling in apps, or swiping up when multitasking feels more fluid.

iOS 12 also includes optimizations for when the operating system is under load. Apps launch up to twice as fast under a heavy load, as does the Share Sheet.

iOS 12 adoption is likely to see a decent bump with the launch of iOS 12.1, an update that is being beta tested. iOS 12.1 introduces eSIM functionality on the iPhone XS and XS Max, brings Group FaceTime, a feature that was removed before iOS 12 launched, and includes new emoji.

It should keep climbing . iOS 11 was poor. People should jump to 12, glad Apple went for performance improvement . Happy so far
Reactions: dwsolberg, bluecoast, BvizioN and 9 others
Comment
B

It's better than iOS 11 by far.
Reactions: iModFrenzy, ILikeAllOS, macguru212 and 8 others
Comment

Well when you get harassed daily to upgrade (if not stealthly upgraded by Apple regardless whether you want to or not) and then make it nearly impossible to downgrade once you realize how buggy Craig & company designed the software I'm not surprised it's at 33%
Reactions: alvindarkness, mrzz, CarpalMac and 3 others
Comment

So adoption was slow at first, but now has outpaced iOS 11. Not surprising. People were reluctant after the fiasco last year, but I guess by word of mouth, people found out iOS 12 was far superior.
Reactions: RedGala, ILikeAllOS, dk001 and 1 other person
Comment
F

South of the Swamp

Let’s just be honest here: iOS 12 is what iOS 11 should’ve been in the first place. iOS 11 was plagued with many issues for months after its release!
Reactions: alvindarkness, Vanilla35, schneeland and 7 others
Comment

FromJamRock said:
Once I installed this update, my battery life took a nose dive. This morning I shut down Siri and my battery life is back to normal.
Click to expand...

madKIR said:
Let’s just be honest here: iOS 12 is what iOS 11 should’ve been in the first place. iOS 11 was plagued with many issues for months after its release!
Click to expand...

iOS 11 was a rough rollout, but it ended up being pretty much fine by 11.3. I do think iOS 12 is smoother and faster, which is why I said it's a lot better. I don't think iOS 11 was a total dumpster fire, but I did have the iPhone X, which was probably the best device for iOS 11. The others maybe struggled because they were older and less optimized.
Reactions: asv56kx3088, mrzz, BvizioN and 3 others
Comment
J

I'm not entirely sure if they are including the iPhone 6 in the "devices from the last 4 years" chart.
Comment

This is interesting to see. iOS 12 adoption was slower than 11's within the first few days, and I think that was because of the bad taste left in peoples mouths by the iOS 11 upgrades. However, this year, there is probably more people recommending the upgrade to others because of how good it is, which is why in the longer term, iOS 12 is being adopted more rapidly
Reactions: ILikeAllOS, martyjmclean and V.K.
Comment

It isn't difficult to get it installed on devices when Apple strong arms and annoys users to the point of frustratingly installing to avoid the constant prodding.
Reactions: mrzz, Jimmy James and jecowa
Comment

guerro said:
It isn't difficult to get it installed on devices when Apple strong arms and annoys users to the point of frustratingly installing to avoid the constant prodding.
Click to expand...

Yep, kinda annoys me when Apple 'show off' these stats when they're constantly bullying users into updating. I'd figure a good amount of users updated just to get the annoying reminders to stop.

Having said that, iOS 12 is definitely one of their best iOS updates for performance improvements alone.
Reactions: mrzz, schneeland, fourthtunz and 2 others
Comment
K

Nice way to show adoption, first build a pile of steaming garbage and then build something to better it. Most people will end up adopting the better version.
Comment

I am on beta's, last 2 beta's are OK, but Safari is behaving oddly, pressing a link does nothing many times, click on the address bar and loading it again will fix it, going back a page results in a blank page, going even more steps back results in the same behaviour, oddly I have similar problems with Safari on my MBP (2012).
It happens on my home WiFi, Wifi at my job but 4G seems to be better.

Didn't have this behaviour before, actually I was surprised by the stability and speed of iOS 12, also switched to a Xs coming from a 6S, huge difference, this (Xs) is soo ffing fast, unbelievable.
Reactions: rynx9
Comment

It appears that the focus on improving performance for older phones truly helped push rapid adoption of iOS 12.
Comment
G

Have to admit, as much as I generally like Apple products, I REALLY dislike their nagging me to upgrade every single day. Once is fine. Give me an opt out choice, because I will do it when I want to.
Reactions: alvindarkness, The Captain, mrzz and 5 others
Comment
E

this isn't tracking.. would be fairly easy to pull up this data
Reactions: iModFrenzy, ILikeAllOS, HenryDJP and 4 others
Comment

G5isAlive said:
Have to admit, as much as I generally like Apple products, I REALLY dislike their nagging me to upgrade every single day. Once is fine. Give me an opt out choice, because I will do it when I want to.
Click to expand...

Don't have this since I always update but I do feel your pain, my issue with OS is the notification which you get when your device isn't connected to the internet, yeah, FFS, I know, the status bar shows you if you have internet (WiFi or Data) and it's just 2 centimeters away from it.
I dislike the way notifications are nowadays, there used to be a time *OS X and iOS were not verbose at all, I like it that way, we don't need that Windows styled crap notification, wish I could turn that off.

*Not macOS, it has been too verbose, give me back the old OS X days.
Reactions: G5isAlive
Comment

iOS 12 has performed much better on my 6s and SE than iOS 11. Even the early betas of 12 were pretty solid.
Reactions: martyjmclean
Comment

rynx9 said:
iOS 12 has performed much better on my 6s and SE than iOS 11. Even the early betas of 12 have were pretty solid.
Click to expand...

Agreed, except for Safari last 2 betas, but I might be one of the few having this problem (read my earlier comment), restart doesn't work btw.
Reactions: rynx9
Comment

justperry said:
Agreed, except for Safari last 2 betas, but I might be one of the few having this problem (read my earlier comment), restart doesn't work btw.
Click to expand...

Ive actually noticed something like that happening when I use Safari on some websites but most work fine. Now that you mention it, how is your text selection. When you push down on a word and you try to select say 3 or 4 lines of text, does it act a little wonky? For me sometimes the cursor will bounce around and select things I didn’t want or will just disappear. It’s kind of a pain in the butt.
Comment