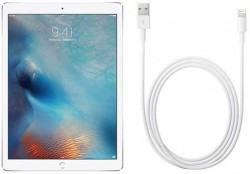 Apple has confirmed that updating to iOS 9.2 should prevent an issue that caused some iPad Pros to become unresponsive after charging from continuing in the future.

Shortly after the launch of the iPad Pro, some early adopters began complaining about an issue that caused the 12.9-inch tablet to become unresponsive after charging, requiring a hard restart to restore functionality.

Apple acknowledged the problem in a support document on its website, stating that it was "investigating" the issue, and has now updated that support document to reflect that "iOS 9.2 or later" should prevent the issue from occurring again.

The issue affected both 32GB and 128GB iPad Pros on iOS 9.1, including Wi-Fi and LTE models, and some users speculated that restoring from an iCloud backup during setup may have contributed to the freezing issues.

MacRumors said:
Apple has confirmed that iOS 9.2 or later ...
Click to expand...

Or later? That makes it sound like 9.2 might actually not fix the problem, and we might have to wait for a later release for the fix.

I never had this problem with mine. But I did need to do a soft start once.

Haven't noticed this issue or checked for it but I had an update afternoon yesterday on all the devices.

I assume they mean if you buy an iPad Pro that comes with 9.1 pre-installed on it, that upgrading to 9.2 or later (if 9.3 is out by that point) will fix the issue.
Reactions: AppleFan78 and citysnaps

It fixed mine. I think mine crashed every time it got to 100%. I left it on the charger last night and grabbed it this morning without any issue.
Reactions: AppleFan78, Codeseven, Jetcat3 and 3 others

(note: the "goodness" numbers are pulled from my posterior, but here's the thing... if you have a million lines of code, and you're at 99.999%, you still have 10 lines of code that are bad, so if anything, I'm guessing way low on my percentages. Oh yeah, it only takes 1 line of code to really mess things up.)
Reactions: jezbd1997 and driceman

My Pro did it twice (the first week), after that, it has been fine. I read many others only had the issue the first week or so as well. Weird.

How about fixing the iPhone which has the same issue, Apple? Just yesterday morning I grabbed my phone and had to enter my code which means the phone rebooted on its own.

Keep us posted on if iOS 9.2 fixes the iPad Pro charging issue by testing on your iPhone 5s?
Reactions: ob81, FasterQuieter, edogyip and 3 others
J

Not the hero iPad Pros deserve... and unfortunately not the hero they need.
Reactions: FasterQuieter

fixed my iPadPro. It would have to reboot each time I recharged overnight.
Reactions: FasterQuieter

Excellent news. Wonder why only some were affected

Great, news, while I don't own a IPP, I can understand how frustrating that issue is, especially given the cost of the IPP

MH01 said:
Excellent news. Wonder why only some were affected
Click to expand...

Probably because they use different components and made at different times from different batches.
Everything, even computer chips are physical items with tolerances in them.
Reactions: sracer, MH01 and Ghost31

I said this weeks ago when the betas were seeding.
R

Don't have a Pro BUT I do have an iPad 3 that I updated to 9.0.2 and, after doing so, it operated slower than pouring molasses.

I updated to 9.2 last night and the iPad 3 is acting like it got a shot of adrenalin - what . a . difference.
Reactions: Jetcat3
Z

I have the Pro 128gb and it has never frozen after charging for me.
J

this update also fixed this issue since day 1 of having the iPad Pro. glad the fix came sooner than later.

No problems ever on my iPad Pro, thankfully...

...except for one: too-rapid battery drain. Turns out the YouTube app was the culprit. It burns battery while in the background, just like Facebook got caught doing! EVEN despite the fact that:

- I rarely use YouTube at all (yet it's my biggets battery user, greater even than Safari which I use constantly, and rivaling 3D games)

- I never log into Google so there's nothing to synch

Suggestion: uninstall the app and use YouTube in the browser until it behaves. (I do think this is a recent issue and so likely to be fixed by Google.)
Reactions: FasterQuieter

warrior2000 said:
fixed my iPadPro. It would have to reboot each time I recharged overnight.
Click to expand...