Apple this week acknowledged that MacBook Air models with Retina displays can exhibit anti-reflective coating issues, as indicated in a memo shared with Apple Authorized Service Providers and obtained by MacRumors. 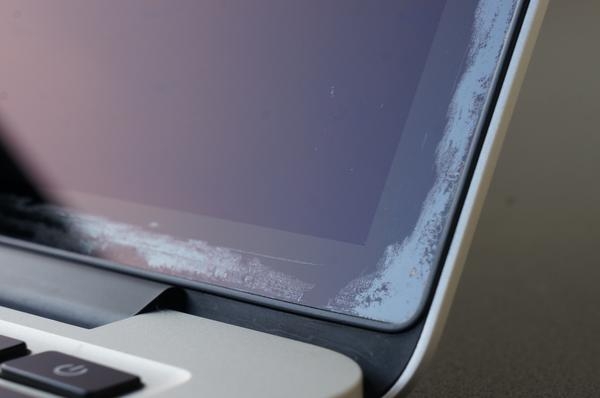 Apple has a free repair program for the anti-reflective coating issue in place internally, but it has yet to add any MacBook Air models to its list of eligible models, despite mentioning it elsewhere in the documentation. However, with Apple at least acknowledging that the MacBook Air can exhibit the issue, customers may have a valid argument for at least a free in-warranty repair.

The eligibility list remains the same as in December 2019 for now:
Apple began the repair program in October 2015 after some MacBook and MacBook Pro users experienced an issue with the anti-reflective coating wearing off or delaminating on Retina displays. Apple has never posted the repair program to its website, opting instead to handle the matter more quietly. For that reason, your mileage may vary.

Over the years, the issue led to an online petition with nearly 5,000 signatures, a Facebook group with over 17,000 members, and complaints across the Apple Support Communities, Reddit, and our own MacRumors forums. A so-called "Staingate" website was set up to share photos of affected Mac notebooks.

Apple Stores outside of China and many Apple Authorized Service Providers are closed right now, but customers can visit support.apple.com for service and support.

Update: Apple has informed us that the MacBook Air, Retina or otherwise, is not part of this program and does not exhibit this issue, adding that this was a mistake on an internal document that has since been fixed.

Update 2: A technician at an Apple Authorized Service Provider disagrees with Apple, informing us that they have serviced several 2018 MacBook Air units that exhibited anti-reflective coating issues.

Apple, just skip that coating...
I've resorted to scrubbing it off completely on computers where Apple no longer wants to do screen replacements. Works just as fine, no real downsides except maybe if using it outside.
Reactions: kazmac, sideshowuniqueuser, allenvanhellen and 8 others

I had this even on my 2012 MacBook Pro. It was crazy and super annoying. You could basically see the whole trackpad and the space bar scratched into the screen.

They did replace it for free but I have been putting a soft mat on the keyboard before closing the laptop ever since. This shouldn’t be necessary on computers for that kind of money.

they should just leave it off, clearly it’s still not working 8 years later
Reactions: Val-kyrie and ksec
G

Can we get a proper functioning laptop Apple Without any issues is that so hard
Reactions: kb923689, Val-kyrie, Oblivious.Robot and 6 others

It is completely unacceptable if the new MBAir still prone to Anti-Reflective Coating issues. Tim Cook needs to step down if it can't get it right.
Reactions: Val-kyrie, allenvanhellen, CarlJ and 1 other person

I can’t believe that, after 8 years of having this issue, they haven’t managed how to adress it ??‍♂️

On the other hand, iPads have anti reflective coating as well, and those hold up pretty well... interesting.
Reactions: Oblivious.Robot, sideshowuniqueuser, Naraxus and 3 others

I had screen replaced due to this issue. Funny, I had no idea and was wondering why the screen looked so bad for a while. Of course, now I wonder how long until this replacement screen has the same issue.
Reactions: Val-kyrie and GalileoSeven
K

I'll stick with Dell.
Reactions: JakeBarnes12, me55, PickUrPoison and 1 other person

I had to take mine off of my mid 2015 pro. Apple didn’t honor my claim as they insisted it was caused by prior damage . Was a bit of labor but happy with the results and nice to know the problem won’t come back.

GalileoSeven said:
lol...........who didn't see this coming?? ?? Amazed at people still paying the Apple Tax for machines with these kind of QA/QC issues.
Click to expand...

How do you avoid your so-called "Apple Tax" and purchasing a Mac when you use XCode for a living?
Reactions: TheSpiritBaby, Rocko99991 and FightTheFuture

doubt it since this issue dates back all the way to MacBooks introduced in 2012
Reactions: kreasonos

Any model with an antireflective coating, which is every MacBook Pro and Air since each line respectively introduced retina (2012- MBPs and 2018- MBAs).

840quadra said:
Apple didn’t honor my claim as they insisted it was caused by prior damage .
Click to expand...

Glad that Apple did the honourable thing??

I have two 2015 MacBook Pros - one provided by my work, and one I purchased. The work one was bought first, and the screen has this issue - interestingly, the delamination clearly follows the pattern of where the keys contact the screen (although until I saw the original report here I didn't realize exactly what was going on).

I bought my personal laptop a year later, about the same time I started noticing the issue with the screen on my work machine. I decided I was going to keep a thin cloth in between the screen and the keys whenever I close it. So far, this screen hasn't exhibited any issues.

I have matte displays on all of my Unibodies. They don't suffer from this issue.
Reactions: dariocotti
G

DaveOP said:
How do you avoid your so-called "Apple Tax" and purchasing a Mac when you use XCode for a living?
Click to expand...

..........hooking up to an external display?? (which would allow one to bypass the problem in question here and justify said tax a bit)
Reactions: Pupalei

Populus said:
I can’t believe that, after 8 years of having this issue, they haven’t managed how to adress it ??‍♂️

On the other hand, iPads have anti reflective coating as well, and those hold up pretty well... interesting.
Click to expand...

It’s because Apple doesn’t really care about the Mac any more. But they will sell you one with a CPU with less than half the cores of a competing AMD PC for $50K.
Reactions: kazmac, TheSpiritBaby and GalileoSeven
R

smirking said:
I have matte displays on all of my Unibodies. They don't suffer from this issue.
Click to expand...

cuz it’s matte duh no need for a coating
Reactions: TheSpiritBaby and GalileoSeven

rofetov said:
This has happened on my early 2013 15" rMBP. Any idea if they would cover it?
Click to expand...

They certainly used to.. I have the same model, there was a year or two where it was a recognised thing they'd definitely fix for free. I got my screen replaced, but it was way more recent and the previous owner had scratched the screen trying to remove the coating (lol) so the cosmetic damage wasn't just apple's fault.. They did massively discount the repair for me though..