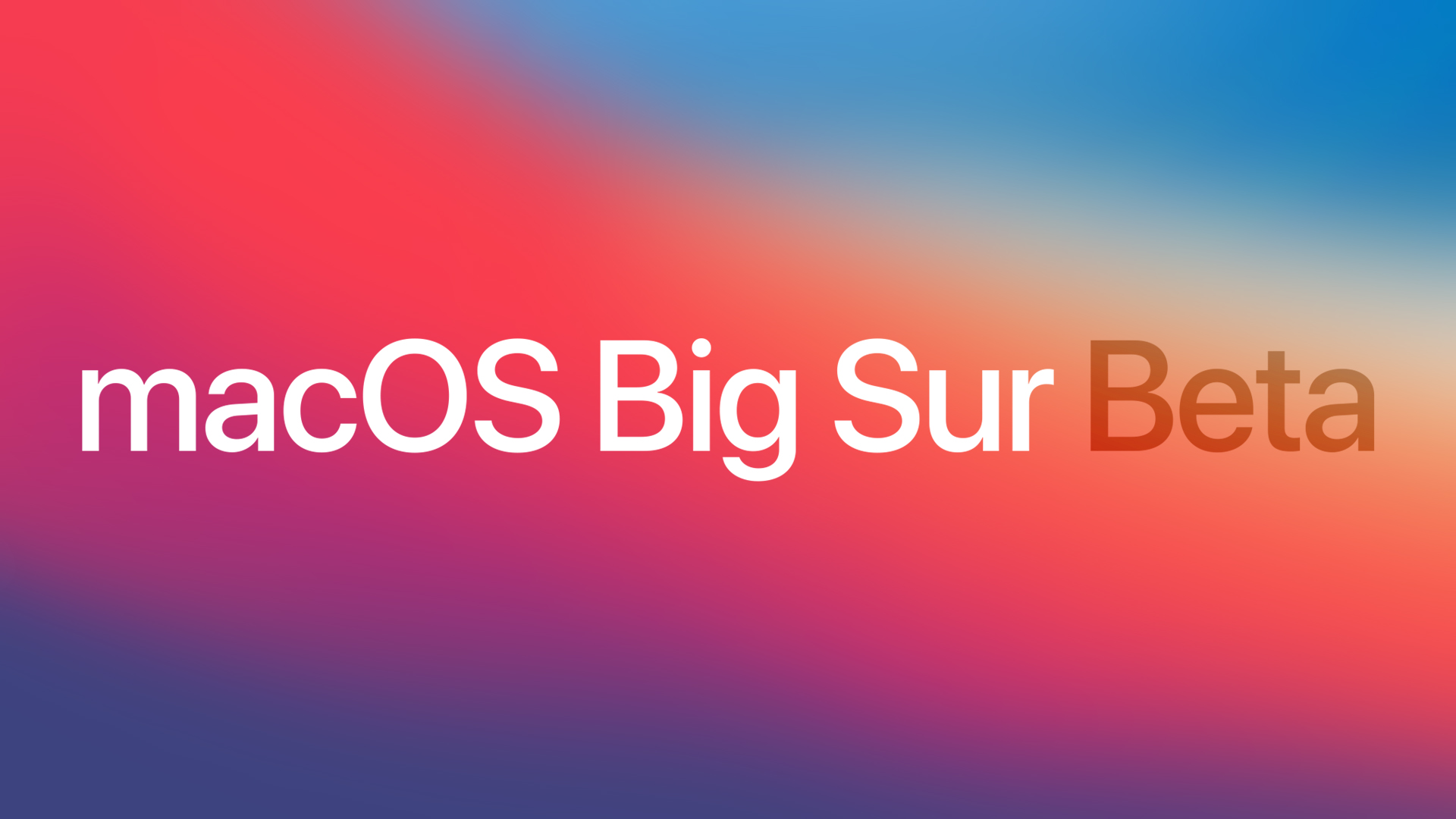 As with all of the new betas, Apple recommends not installing ‌macOS Big Sur‌ on a primary machine because it is early release software and could have major bugs.

macOS Big Sur brings a refreshed design to the Mac operating system, overhauling the entire look from the curvature of the window corners to the dock icons to the system sounds.

Everything feels fresh but familiar, with a lighter and more modern appearance. There's a new customizable Control Center that mirrors the Control Center on iOS devices, putting key system controls right at your fingertips.

The Notification Center has been redesigned with iOS-style widgets that are available in multiple sizes, plus there are more interactive notifications that are now grouped by app to make it easier to see what's going on.

Safari is faster and more battery efficient, plus there's a new start page that can be customized with wallpapers and sections that include Reading List and iCloud Tabs, which makes Safari more tailored to your individual usage needs.

Tabs have been redesigned, there's a built-in language translation feature, and Chrome and Firefox Extensions can be ported to Safari. There's also an option to choose which sites an extension works with for greater privacy. Speaking of privacy, a new Privacy Report feature lets users know the trackers Safari is blocking when you visit websites.

Messages is now more similar to the Messages app on iOS with support for pinned conversations, mentions, inline replies, and Memoji creation, plus the built-in search feature has been overhauled to make it easier to find links, photos, and conversations in the app.

Photos has a better Retouch tool, Apple Music's For You section has been replaced with a Listen Now section, HomeKit Secure Video cameras support Face Recognition and Activity zones, and Siri can answer a wider range of questions than before.

The only question on everyone's mind is: DID THEY FIX THE BATTERY ICON
Reactions: Mikkis, michaelnugent, Pahanda and 30 others

One thing that really bugs me in Big Sur that I wish they'd change/fix is the menubar icon spacing. I mean, this is my current menubar under Catalina:

With the increased spacing I don't think all the icons will fit on the screen on my freaking 27" iMac! Nevermind my laptop.

There seems to be a lot less respect for screen real estate usage in Big Sur; this is going to be very irritating for those of us who use every square centimeter to its fullest.
Reactions: na1577, tranceking26 and TheDailyApple
N

Not yet available for ARM processors.
K

And yes, Software Update showed it as macOS 10.16 Beta 2.
Reactions: LlamaLarry, RandomDSdevel, Babygotfont and 1 other person

Looks like the update profile has dropped off - normally it would say developer under Software Update on the left.
Reactions: Vashetti

What on earth could they be including that makes it almost a 10GB update file Jesus
Reactions: RandomDSdevel

Update us with any new changes
Reactions: RandomDSdevel

Perhaps it’s just the entire OS rather than a delta update.
Reactions: RandomDSdevel, Larsvonhier and Bokito

xnsys said:
Looks like the update profile has dropped off - normally it would say developer under Software Update on the left.
Click to expand...

I reinstalled the profile and the update appeared immediately, thanks!
Reactions: RandomDSdevel and xnsys

Curious to what they update
Reactions: RandomDSdevel

Maybe a way to make a Bootable USB Installer?
L

macOS 11 is still being reported as 10.16 when checking for updates in System Preferences: 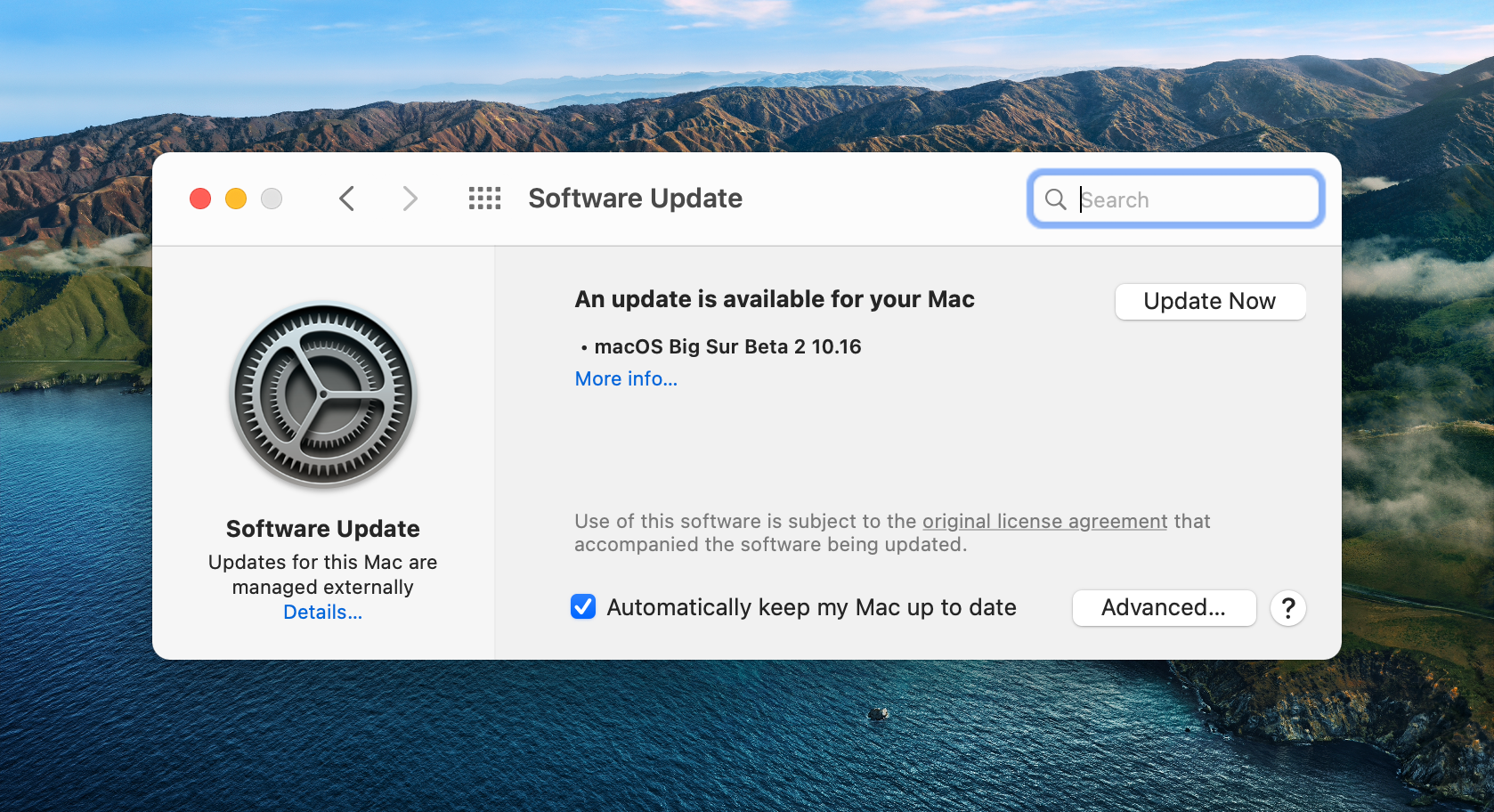