Apple today sent out invites for a media event that will be held on Monday, March 21 at the company's Town Hall auditorium located on its 1 Infinite Loop campus in Cupertino, California, reports BuzzFeed. As with most Apple media events, it will kick off at 10:00 a.m. Pacific Time.

Several products are expected to be showcased at the event, including the new 9.7-inch iPad, the 4-inch iPhone SE, and new Apple Watch bands. There's also a possibility that some Mac refreshes could be announced as the time is right for updates, but there have been no rumors confirming that is the case. 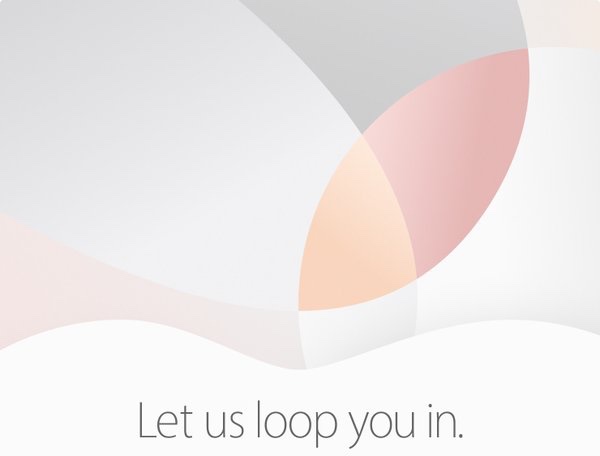 Headlining the event will be the 4-inch iPhone SE and a new 9.7-inch iPad. Rumors suggest the iPhone SE will look nearly identical to the iPhone 5s, but it will include new internal hardware that brings it in line with newer Apple devices. It is rumored to have an A9 chip, an improved camera, and NFC support for use with Apple Pay.

The new 9.7-inch iPad has been referred to as the iPad Air 3, but recent rumors have suggested it may instead be branded as an iPad Pro. The device is said to include many iPad Pro features, like a four-speaker design, a Smart Connector for connecting accessories, and display improvements for Apple Pencil support. It may also be the first iPad to feature a rear LED flash.

Apple also plans to introduce new Apple Watch bands at the event. Existing bands will likely be available in new colors and there may be new product lines, such as a rumored nylon band and a Space Black Milanese Loop.

Article Link: Apple Sends Invites for 'Let Us Loop You In' Media Event on March 21

Reactions: You are the One, apolloa, Dydegu and 2 others
S

The four iPhone colors are in the image. That should squash any rumors about bright pink or other colors on the SE.

I also take the "loop you in" tagline to mean we'll have a new Milanese Loop watch band.
Reactions: imola.zhp, Simche, TropN and 44 others
Comment

I'm not sure if there is anything from this event (a first time) that I'm interested in, maybe the AW bands but that's about it.
Reactions: Dopestar, jgelin, AleXXXa and 3 others
Comment
J

Cue over-analysis of the invite!

So are there usually leaks of new MacBooks before refreshes? As there haven't been leaks (that I know of) is it very unlikely that there will be macbook refreshes (based on previous trends)?
Reactions: nutmac, MrUNIMOG and Avieshek
Comment

Looking forward to the new 9.7" iPad but I am REALLY hoping (but not counting on) a new 13" rMBP
Reactions: imola.zhp, Simche, random640 and 12 others
Comment
J

so the new iPhone SE will have the old iPod Touch loop. Yay! :/
Reactions: imola.zhp, Simche, AleXXXa and 13 others
Comment
D

Really hoping for updates to the MacBook form factor. But seems unlikely and I think wwdc would probably be the more likely place to announce a MacBook Pro refresh
Reactions: Wowereit, random640, Adithya007 and 4 others
Comment

I feel near on the same for this one, i'll watch it of course but its not as gripping
Reactions: JKAussieSkater, ruimpinho, Apple Human and 5 others
Comment
B

Finally! They're clearly bringing the loop back on the iPod touch!

Obvious hidden message: new loops for iPhone and iPads (like the ones the iPod Touch has)
Reactions: imola.zhp, AleXXXa, Apple Human and 6 others
Comment
B

Bring on 200 Lame responses about deciphering every pixel on the invite... Oooh. . What could it mean.....

My body is ready.. TAKE MY MONEY!!!!!!
Reactions: TropN, Goatllama, Apple Human and 7 others
Comment
K

Do you think the SE will have 2GB of RAM?

If it's only 1GB of RAM, that 5S at half the price will be pretty interesting.
Reactions: Adithya007, c0ppo, Apple Human and 5 others
Comment

jmcrutch said:
so the new iPhone SE will have the old iPod Touch loop. Yay! :/
Click to expand...

The 4in iPhone better have the same body design as the newer iPhones. It also better have 3D Touch, and every other premium feature. If it doesn't have all these things, mark it up as another Flapple (Apple flop).
Reactions: Ay_Zimmy, Mitch1984 and 0007776
Comment

It could be a worthy Wallpaper.
Last edited: Mar 10, 2016
Reactions: MrUNIMOG and Blujelly
Comment

NickD73 said:
The 4in iPhone better have the same body design as the newer iPhones. It also better have 3D Touch, and every other premium feature. If it doesn't have all these things, mark it up as another Flapple (Apple flop).
Click to expand...

JonneyGee said:
The four iPhone colors are in the image. That should squash any rumors about bright pink or other colors on the SE.

I also take the "loop you in" tagline to mean we'll have a new Milanese Loop watch band.
Click to expand...

As far as the Watch goes, I'm predicting new bands as well, along with a permanent $50-$100 price drop. Also new watch faces, although that's more of a hope than a prediction...
Reactions: Ghost31 and rockstarjoe
Comment

Will it be streamed? On keynote days, our whole office orders food in and watches together.
Reactions: TropN, Jj237, thekeyring and 17 others
Comment

So it's pretty obvious there will be watch bands. I predict an iPhone similar to the 5C, smaller iPad Pro, and maybe a surprise but I doubt Mac updates will be here. Refreshed Mac Pro and MacBooks will probably happen at WWDC.
Comment
You must log in or register to reply here.
Share:
Facebook Twitter Reddit Email Share Link
Register on MacRumors! This sidebar will go away, and you'll see fewer ads.
Sign Up
Top Bottom