Apple shipped an estimated 14.3 million iPads in the second quarter of 2020, maintaining its position as the number one tablet vendor in the world, according to new data shared today by Canalys. That's up 19.8 percent from the 11.9 million sold in the year-ago quarter. 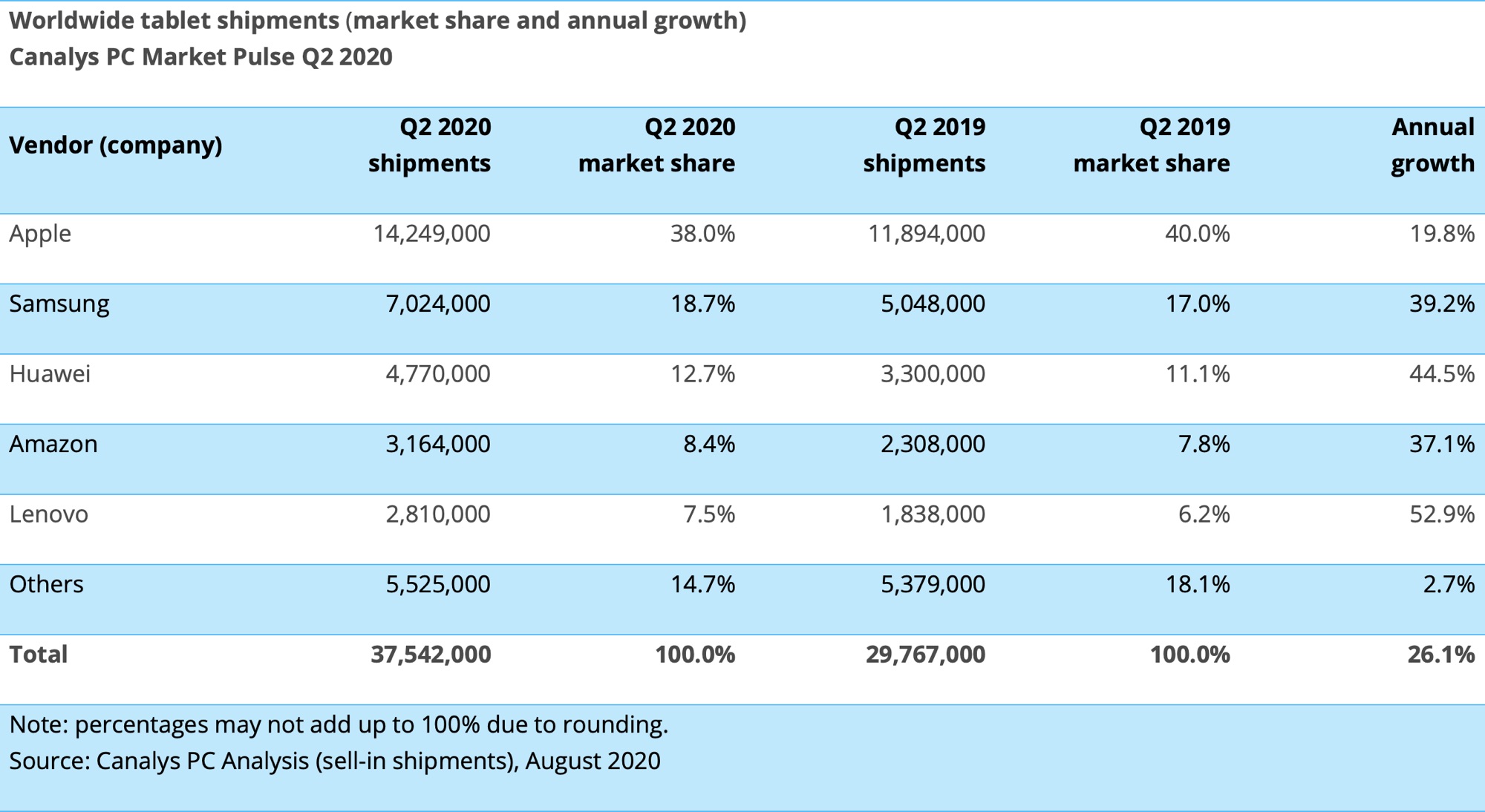 Apple's own earnings for Q2 2020 indicated a major surge in iPad sales as people work and learn from home. Apple does not provide details on the number of iPads sold or a model breakdown, but iPad sales brought in $6.5 billion during the quarter. 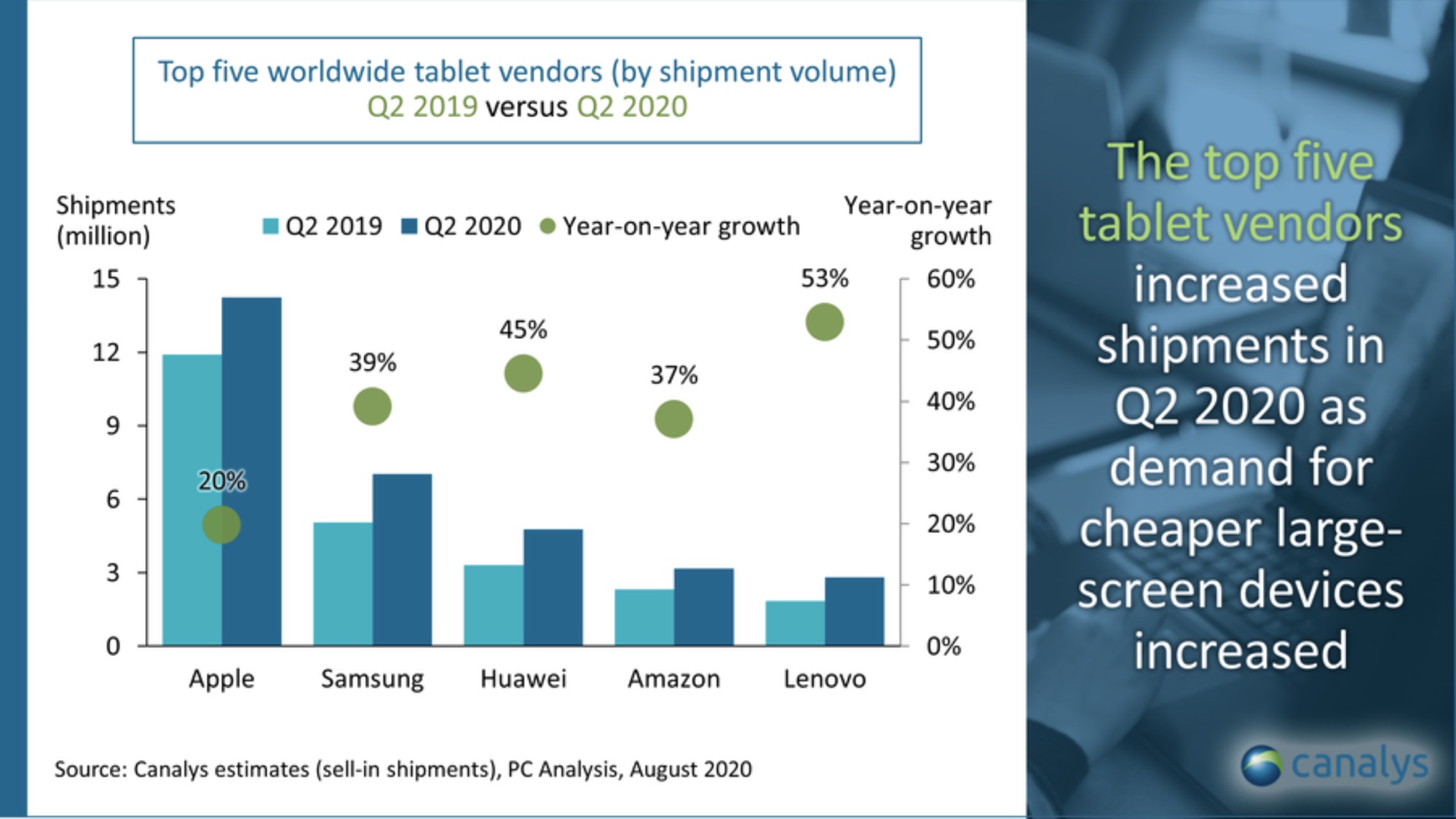 Worldwide tablet shipments hit 37.5 million units in Q2 2020, a remarkable 26% year-on-year increase. Tablets, part of the PC market, had faltered in recent years, but demand in Q2 2020 was boosted by consumers and businesses wanting affordable access to basic computing power and larger screens to facilitate remote work, learning and leisure. Vendors were able to ramp up production to meet this renewed demand. At the same time, retailers and carriers in various markets provided financial incentives on devices and data to encourage tablet purchases.
Click to expand... 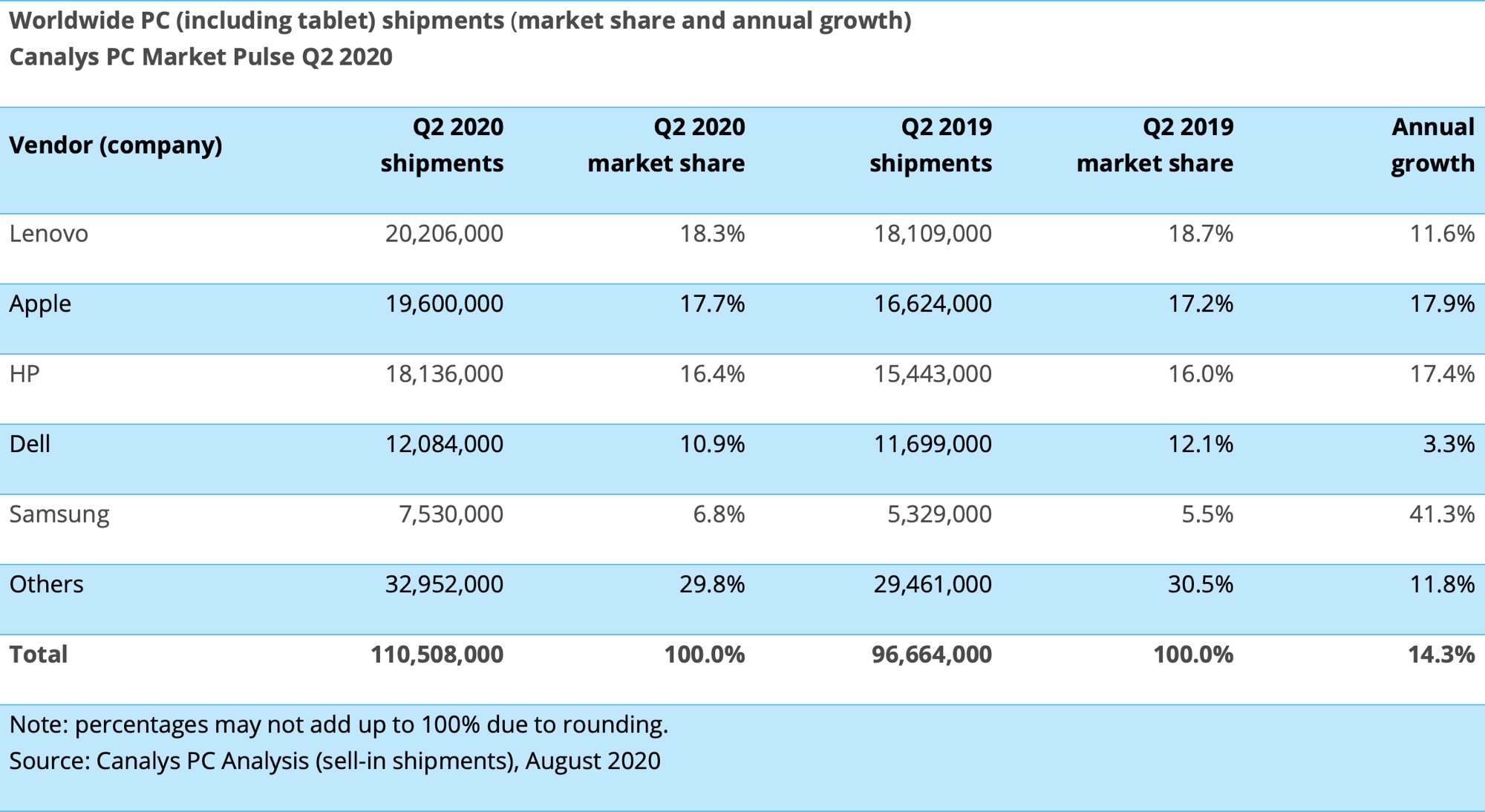 Apple's Mac earnings were also way up, bringing in $7 billon, $1.2 billion more than the $5.8 billion in Macs sold in Q2 2019. During Apple's most recent earnings call, Apple CEO Tim Cook noted that supply constraints affected both Mac and iPad sales during the quarter. Some Macs, such as the iMac, have had long shipment estimates since soon after the pandemic began.

Apple is working to get more iPads and Macs into the hands of customers, so sales are expected to see continued growth in the fourth quarter.

I would be curious to see the US numbers. Who is buying Samsung tablets?!
Reactions: Lobwedgephil, Professor Rucy, XXPP and 2 others

I love how these people never seem to make it into these forums, just the ones that they think justify their asinine positions.
Reactions: diandi, Ghost31, Isengardtom and 8 others

It’s interesting/surprising seeing so many Android tablets being sold (assuming that Samsung for example don’t sell Windows tablets).
I had everything from Android Tablets (ASUS, Samsung) over Windows (Linx and Microsoft Surface) to an iPad Air. Surface and iPad were the only ones that could be used to actually get work done, with the iPad very clearly outperforming the Surface.
Reactions: Marlon DLTH :)

Interesting that per this report Apple lost market share of tablets and also had the lowest growth among all the brands.
Reactions: Mactendo and DragonX
J

I don’t think anyone of those vendors would be disappointed with their numbers...seems tablets are becoming popular again
Reactions: Marlon DLTH :)

Even though Samsung makes great screens, I don’t think they have a chance competing with Apple.

Outside of the Apple Watch, the iPad Pro is my second favorite Apple device.
Reactions: mr_jomo, Crowbot, Marlon DLTH :) and 2 others

I think that’s PC’s including iPads. The above graph pegs iPads as 14 million. That would leave Macs as only 5 million units and still eclipsing the iPad in revenue
Reactions: jdb8167, Marlon DLTH :) and FightTheFuture
B

rp2011 said:
Interesting that per this report Apple lost market share of tablets and also had the lowest growth among all the brands.
Click to expand...

It's a weird mashup of charts -- looking at the combined PC+tablet chart: 2nd highest annual growth, with shipments just under Lenovo, who has the enterprise market damn near cornered. All the while moving up 0.5%. I don't doubt their position in computers, but if you asked me before seeing this I'd have guessed the opposite of what it shows. Perhaps it's an expansion of the tablet market to altogether new buyers.
Reactions: rp2011
R

Something is going on, they are popular or major supply chain issues. There isn’t a new iPad Pro (either size) to be purchased at a store here in Ohio. Been checking for weeks...
A

I still haven't found a place in my use case that supports a tablet. And believe me, I've tried.
Reactions: Professor Rucy and erniefairchild1
4

rcooked said:
Something is going on, they are popular or major supply chain issues. There isn’t a new iPad Pro (either size) to be purchased at a store here in Ohio. Been checking for weeks...
Click to expand...

Definetly not supply chain issues, A quick reference to Best Buy, Fry’s, MicroCenter, Target, etc. everything is in stock. The only thing that I see regularly out of stock is the ‘Apple Pencil and keyboard‘, but accessories are entirely A different category.

Plus, When you factor schools are close for being in session, then you obviously have those who are ‘gearing up’ for the digital transition, especially with iPad being a primary tool in all age brackets.

ani4ani said:
I don’t think anyone of those vendors would be disappointed with their numbers...seems tablets are becoming popular again
Click to expand...

To be fair, I’d suspect that a lot of the growth this quarter in tablets is happening because of COVID. For kids they’re good for schoolwork, and they can be generally helpful as an extra screen - lots of use for FaceTime and Zoom, and, for instance, I know a professor who got an iPad Air and Pencil to draw diagrams for her classes, since she can no longer stand at the front of an auditorium and write on whiteboards.

An iPad has a bigger screen than a phone, can do FaceTime/Zoom duty without monopolizing comparatively scarce computers in the home, and is cheaper than buying another computer. It can also keep the kids entertained so that parents can get work done.

Don’t get me wrong, I’m happy to see more iPads in the world, but I’m guessing a lot of the current uptick is because of the current situation, not a general shift from computers to iPads.
Last edited: Aug 3, 2020
Reactions: CarpalMac, Valtari, Isengardtom and 2 others

I believe Apple's numbers will go up even further now that, AT LAST, they gave the iPad mouse/trackpad support.

My Macs are skating on thin ice... It's likely it'll be thawed out this Winter (ironically enough) once new iPads are released.
Reactions: mr_jomo, Isengardtom and Marlon DLTH :)

rcooked said:
Something is going on, they are popular or major supply chain issues. There isn’t a new iPad Pro (either size) to be purchased at a store here in Ohio. Been checking for weeks...
Click to expand...

If you are referring to Apple stores, it has been the same here for me. And the Apple website has regularly had ship dats close to 1.5 months. I ended up buying from Amazon. I didn’t want to wait so long on Apple.

I'm surprised iPad has less than 50% market share given the product mix I see in daily life. Lot's of Android phones, the occasional Surface, but never an Android tablet. There must be strong trends by country...

Also, and I direct this to Lenovo, any tablet maker behind Amazon Fire should sit in a corner and think about what they've done.
B

rp2011 said:
Interesting that per this report Apple lost market share of tablets and also had the lowest growth among all the brands.
Click to expand...

This is why growth percentages from small basis mean nothing. I sold 2 tablets versus 1 last year. 100% growth! Don’t you even me?

Baymowe335 said:
This is why growth percentages from small basis mean nothing. I sold 2 tablets versus 1 last year. 100% growth! Don’t you even me?

True, but that doesn’t explain loss of market share.
C

Anybody have a Table OR Chart they can post that shows what AAPL had reported, up until they stopped reporting ???

I don't trust the Projections OR Estimates by ANY Analyst who covers AAPL.
B

The growth in the total number of tablets shipped was greater Than what Apple could reasonably grow with an already dominate share.
Reactions: Marlon DLTH :) and erniefairchild1
T

I wonder what percentage of these tablets were bought by schools (k-12) or even universities for their students to use?
Reactions: Marlon DLTH :)

So much for Cook’s “Apple doesn’t lead in any one product category” mantra.
M

Baymowe335 said:
The growth in the total number of tablets shipped was greater Than what Apple could reasonably grow with an already dominate share.
Click to expand...

This. I don’t see how you can spin this into a bad thing.