ifoAppleStore reports that Apple has agreed to spend nearly $4 million to refurbish a run-down subway station adjacent to its future retail store on Halsted Street in Chicago. In exchange, Apple will receive from the Chicago Transit Authority (CTA) a free long-term lease on an unused bus turnaround dividing the subway station from the Apple store that will allow the company to turn the space into a landscaped public park.

Over the years, the CTA's building has fallen behind on maintenance. The paint is peeling, the windows are filthy, an electrical sign has dangling wires, and metal framing is rusting. Inside the building and underground, the station features white tile walls and fluorescent lighting, with hallways leading to two narrow platforms underground.

In the agreement approved at an August 19th Chicago Transit Board meeting, in exchange for the improvements the CTA will lease the bus turnaround to Apple at no cost for 10 years, with options on four, five-year extensions. The CTA will also give Apple "first rights of refusal" for naming the station and placing advertising within the station, if the CTA later decides to offer those rights.
Click to expand...

Apple will reportedly spend up to $1,789,000 on its own refurbishment of the exterior of the station building, while it will pay the CTA up to $2,108,000 to perform upgrades on the station's interior. The timeline calls for the work to be completed by September 30, 2010, suggesting an approximate opening date for the store, for which structural steel has already been erected. 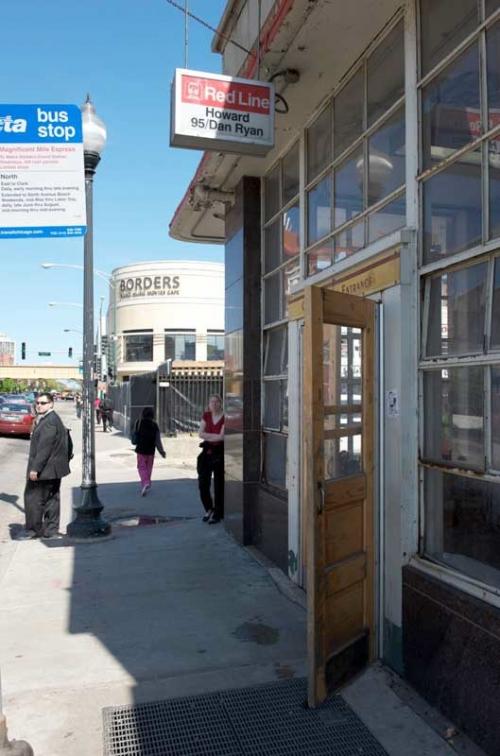 Interesting to see Apple getting in on this. I live on North Avenue not too far from there. Can't wait to have a closer store location.
Comment

Good for Apple. Business must be booming.
Comment
T

Well, that's something you don't see from many other companies.

Edit: Also, lets not forget how much they are able to milk this for good PR
Comment
5

see man, this is awesome. i scratch your back, you scratch my back.
Comment
D

They just dont want there future store across the street from a crap hole.
Comment

AS long as Apple doesn't start to pay to make sure there are no homeless people or other undesirables disturbing the visual environment of their stores.

(That's what this is what is about no doubt. they don't want a run down station next to their store to detract from the beauty of "the shining apple".)
Comment
T

Diseal3 said:
They just dont want there future store across the street from a crap hole.
Click to expand...

No doubt. Some L stations aren't bad as they have been remodeled lately (mainly along the State St. subwayJackson, Monroe, etc.), but others are atrocious. This should be a welcome improvement.
Comment

Great. The cost of macbooks just went up.

I wonder where the homeless winos and hookers will go.
Comment

Michael73 said:
Now, if the public park had free WiFi, that'd be awesome
Click to expand...

Just sit a little closer to the Apple store
Comment

Sweet! I'll have an Apple store that is even closer to me than the Michigan Ave. store. I guess that is what the old gas station is going to be. I was wondering what was being built there for a few months, I guess I know now.
Comment
M

To each his own, but I prefer the public park over a run-down bus station. I.e.,

Let's hope they do better than these scumbags who got sweetheart deals from the city.

The L usually isn't going to win any design awards, but it's a functionally elegant transit system that gets people where they're going in fairly good time, and without too much hassle. It is certainly in Apple's interest to have a store right next to a station, particularly a freshly refurbished one. I am planning on, if all goes well, moving to Chicago for grad school next year and probably living in Lakeview (preferably near Addison or Sheridan red line), so this would be my Genius Bar. Handy that it's going to be right by the train.
Comment

Halsted? As in boystown? Behold the new place to meet gay guys.
Comment

Why would that matter?

No really, companies have been offered to fix up land and given some form of public compensation before. It doesn't matter what form of social/economic structure.
Comment
R

This is not very far from the Michigan Ave store. I'm glad there's another store in Chi but, I think they should have placed it much further west or north.
Comment

And in other Apple-related news today...