Apple TV+ movie "Finch" set a new viewer record on the streaming service, according to Deadline. Citing unnamed sources with knowledge of how well Apple TV+ content performs, Deadline says that "Finch" had the largest opening weekend ever on Apple TV+. 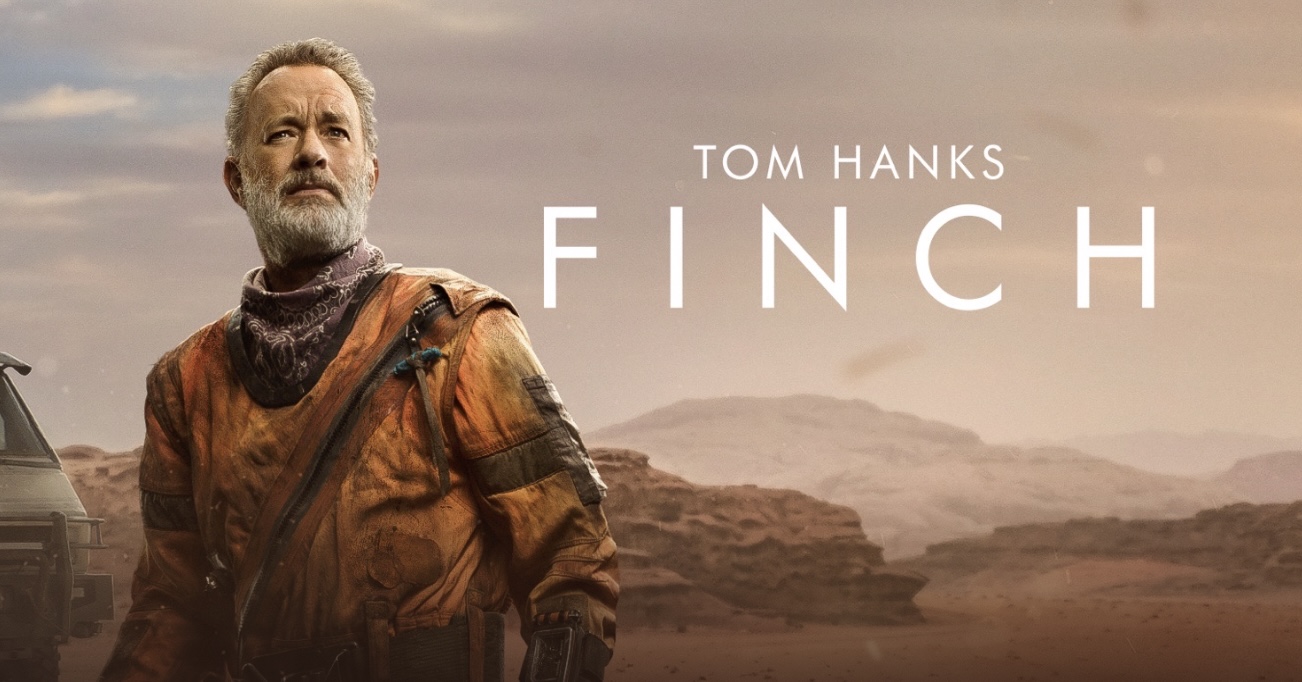 Starring Tom Hanks, "Finch" tells the story of a man, a robot, and a dog surviving in a post-apocalyptic world. From Apple's description of the movie:

In "Finch," a man, a robot and a dog form an unlikely family in a powerful and moving adventure of one man's quest to ensure that his beloved canine companion will be cared for after he's gone. Hanks stars as Finch, a robotics engineer and one of the few survivors of a cataclysmic solar event that has left the world a wasteland. But Finch, who has been living in an underground bunker for a decade, has built a world of his own that he shares with his dog, Goodyear. He creates a robot, played by Jones, to watch over Goodyear when he no longer can. As the trio embarks on a perilous journey into a desolate American West, Finch strives to show his creation, who names himself Jeff, the joy and wonder of what it means to be alive. Their road trip is paved with both challenges and humor, as it's as difficult for Finch to goad Jeff and Goodyear to get along as it is for him to manage the dangers of the new world.
Click to expand...

"Finch" premiered in more than 100 countries on Friday, November 5, and it eclipsed the prior opening weekend record held by "Greyhound," another Tom Hanks film.

Apple has been securing the rights to multiple high-profile movies to bolster the popularity of Apple TV+. In the coming months, Apple will debut "Killers of the Flower Moon" with Leonardo DiCaprio and Robert De Niro, "Swan Song" with Mahershala Ali and Naomi Harris, and "Emancipation" with Will Smith.

It was a really solid watch. Best Apple film since "CODA."
Reactions: Amazing Iceman, f00f, DryHeave and 8 others

watched it on a flight yesterday. it was fine.
Reactions: rgarjr, z3an, Ghost31 and 4 others

After watching a movie and a few dramas, there is nothing to do with the Apple TV+. I guess it follows the fate of ping.
Reactions: AAPLGeek, jeffirl, quaresma and 11 others

Nice! Can’t wait to watch it till this weekend.
Reactions: rgarjr, SFjohn, svish and 2 others
G

Are Apple TV+ shows that bad that this was the one that set a record?
Reactions: AAPLGeek, booksacool1, reden and 20 others

It was meh.
Reactions: Amazing Iceman, AAPLGeek, booksacool1 and 24 others

Ooh "Killers of the Flower Moon" is with Brendan Fraser and John Lithgow!
Reactions: SDJim

Apple is certainly spending some cash on movies with A list stars. But without having absolute numbers stories like this one are rather meaningless. Finch has 21k ratings on imdb. This is not a large number, certainly not a blockbuster size. By comparison No Time to Die has 155k ratings and Dune has 150k.
Reactions: imnotthewalrus and BlueParadox

Think|Different said:
It was a really solid watch. Best Apple film since "CODA."
Click to expand...

Isn’t it the first one since CODA?
Reactions: G5isAlive

Apple and Tom Hanks keep crushing. I'm sure we'll continue to see more of him on Apple TV+.
Reactions: jeffirl, G5isAlive, mejsric and 1 other person
N

I enjoyed Finch, but it wasn't amazing. Way better than Foundation though...I got so bored after 4 episodes of Foundation that I just couldn't force myself to keep going.
Reactions: SFjohn, macruise, iOScity and 10 others

V.K. said:
Apple is certainly spending some cash on movies with A list stars. But without having absolute numbers stories like this one are rather meaningless. Finch has 21k ratings on imdb. This is not a large number, certainly not a blockbuster size. By comparison No Time to Die has 155k ratings and Dune has 150k.
Click to expand...

Remember that this is only available on Apple TV+. Apple doesn't care about setting box-office records, they want to attract people to their service.
Reactions: G5isAlive, The Barron, SuperCachetes and 1 other person

It's a good movie. Thoroughly enjoyed it. ? ?

Good music selection throughout movie too.
Reactions: Amazing Iceman, rgarjr, michaelnugent and 6 others

This is like cast away... barely contains actors or too much music.
I actually loved it, it feels like a Disney movie without heroes or anything fantastic.

Of course movies are like food, they taste different to everyone. Although not a genious masterpiece, it may appeal to some. I watched it 2 times in the end. Love that Robot... very childish and funny.
Reactions: SFjohn, G5isAlive, imnotthewalrus and 1 other person
N

I got 3 free months of Apple TV+ trial with my iPhone purchase and I never redeemed it. Didn’t see anything that remotely looked interesting. I guess that’s bad.
Reactions: AAPLGeek, pali2704, G5isAlive and 5 others

Macintosh TV said:
Remember that this is only available on Apple TV+. Apple doesn't care about setting box-office records, they want to attract people to their service.
Click to expand...

yes, I certainly understand that. still would be interesting to see absolute numbers. they would say a lot about how many users ATV+ has. if the overall viewership is low beating a previous low record doesn't say much. In asbsence of official numbers I find that imdb rating numbers are a good proxy to judge.
Reactions: KindJamz

For me it was a nice movie. I enjoyed watching it, although the main idea could have been explored a bit better, more in depth. Maybe a series? I don’t know.
Reactions: GrumpyMom and hooptyuber

I watched it, thought it was a pretty good movie, although I found myself wanting answers to a lot of unaddressed issues. Like how he was living in a bunker under a wind farm where only one windmill was operational and when it stopped working the power went out.

Yet he then creates a robot that doesn’t need charging, doesn’t seem to have any kind of significant battery packs, so why wouldn’t he have used that technology to ensure constant power for the bunker? And the robot, not only was he self-powered, but he must have been made with some kind of mysterious super-metal, with motors / servos that could generate huge power to allow it to lift the RV to change the tire.

And the RV had those giant solar panels on it, but clearly the thing needed gas/diesel, as we saw him filling the tank with a gas can, which no way would have been enough to get them from St. Louis to San Fran. So was the RV a hybrid diesel electric?

I get that the point of the show wasn’t to address technical advancements of our dystopian future, but rather how a robot became sentient and human.
Reactions: WWPD, z3an, GrumpyMom and 6 others
D

Climate change narrative but robot and dog make really good actors. I do like the other submarine movie with Tom hanks though this one a bit depressing.
Reactions: xnu

Jon Stewart's show is absolutely phenomenal. If you liked The Daily Show his new project I consider a much more grown up version with a more sardonic bite. He doesn't pull punches and his exposes are more raw. The intermission shorts are hilarious.
Reactions: SFjohn, cyanite, DogHouseDub and 2 others
B

Is Tom Hanks somehow now the king of movies where he's the only human actor? Or is this somehow the post-apocalyptic sequel to Castaway?

I watched it over the weekend and.. yeah, I was initially confused because I thought it was S01E01 of a new series, so I kept wondering how this was going to play out long term. (Then it kinda dawned on me once I noticed it was a ≈2 hour runtime - about an hour in.) I wondered if it was going to be the kind of series that I'm anxiously awaiting staying up late Thursday nights to watch (like Ted Lasso, Foundation, and now Invasion) but decided it wasn't going to be.

As a movie, it's OK, but if you're not into suspending disbelief (aka a pretty smart engineer somehow creates a fully sentient AI robot but can't figure out indoor farming or height restrictions for that matter) then maybe it ain't for you.
Reactions: Boeingfan, Someyoungguy, Cam Elppa and 2 others

V.K. said:
yes, I certainly understand that. still would be interesting to see absolute numbers. they would say a lot about how many users ATV+ has. if the overall viewership is low beating a previous low record doesn't say much. In asbsence of official numbers I find that imdb rating numbers are a good proxy to judge.
Click to expand...

If you're going to use IMDB reviews as a benchmark (not a bad surrogate, IMO), you can't really compare a film that has been out five weeks to one that's just a few days past its opening.
Reactions: G5isAlive, mudflap, Bow Commander and 1 other person
You must log in or register to reply here.
Share:
Facebook Twitter Reddit Email Share Link
Register on MacRumors! This sidebar will go away, and you'll see fewer ads.
Sign Up
Top Bottom