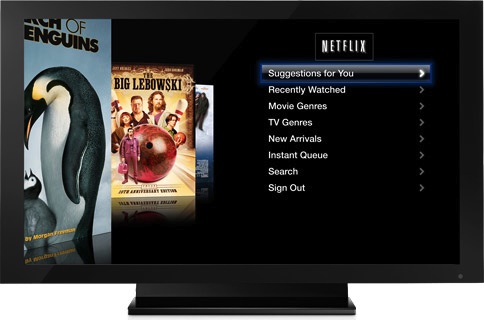 As noted by Business Insider, Netflix today revealed in its quarterly earnings release (PDF) that the new Apple TV released at the end of September has already surpassed the iPad in terms of number of hours of Netflix content streamed.

The devices with large installed bases - meaning Windows and Mac laptops, Sony PS3, Microsoft Xbox, and Nintendo Wii - are the most popular devices for watching instantly from Netflix. AppleTV has done very well for us, and in just four months has passed the also-growing iPad in Netflix viewing hours.
Click to expand...

While it should not be a surprise that the Apple TV is seeing strong performance when it comes to Netflix streaming due to its position as a set-top box for viewing content on a traditional TV, it is somewhat remarkable given the disparity in sales volumes between the two Apple products.

Apple's most recent earnings release revealed that the company has sold nearly 15 million iPads, while the Apple TV only reached the one-million mark at the close of the year. While not all of the sales of either device have occurred in markets where Netflix offers streaming content, iPads still likely outnumber Apple TVs by at least an order of magnitude in Netflix's markets.

People like to watch video on a TV more than the iPad? Sounds about right!
Comment
D

Not a surprise at all - I love watching netflix content on my tv and usually watch to the end, but I find that when I watch it on an iPad, I frequently stop watching before the end of the show. I think that the Apple TV will continue to show growth as a easy to use netflix streamer.
Comment
N

I've been using it since I got my Apple TV about a month ago and so far I'm loving it.

And I have noticed some posters having trouble with long load times and freezing, but so far I have yet to experience and troubles.
Last edited by a moderator: Jan 27, 2011
Comment

I stream Netflix via ATV to my 50" Panasonic plasma every other day. Great user experince. I've prob sold 5 or 6 ATVs after friends saw mine in action.
And while my Panasonic has Netflix built in, the UI is complete ass compared to ATV - which is no surprise. Add in all the other ATV features to my Mac-based household and it really is a no-brainer at $100.
Comment

i'm thinking about buying an atv just for this feature.
the app on the ipad/iphone is just way too unreliable. it works perfect once it loads, if it ever loads.
Comment

To stream Netflix to a television, I've used a computer, xbox, wii, ps3 and Appletv 2. The latter has the best interface for navigating the queue in my opinion. The choices are laid out in 3D and navigating it is fast. On other devices you have to scroll slowly in a linear fashion.

I recommend using a Harmony remote to go with the Apple tv also (if it is part of an entertainment system).

For the other devices, a wii was the first device I used besides a computer but the resolution isn't as great as the others. I stopped using it when I purchased a ps3 for bluray and streaming. I thought I'd buy games but I haven't yet. Someone gave me a second hand xbox that I hooked up to my second tv upstairs and I can't stand the fee you have to pay microsoft to access netflix. This is my least favorite option. And the interface isn't great but they did update it recently and it looks a little better.

One other thing I'll say in comparison. My ps3 and Apple TV are in close physical proximity. The Apple TV had problems with netflix while ps3 did not. I found that changing the Apple TV to the single channel wifi from the dual channel and moving it farther away from the sub woofer did the trick. I think the ps3 buffers more with the hard drive and probably is shielded more so the sub woofer doesn't affect it as much. I think the location tucked down under shelves and equipment and through several walls might have been too much for the dual channel also. So if you are having problems streaming check the location of the unit. It might be too close to a speaker or amplifier.
Comment
L

I bought 2 Apple TV's for the sole purpose of streaming Netflix.

Also, the 2GB data cap may have had something to do with this.
Comment

Another Apple TV comment (not netflix related) - when it comes to music I feel it is better to push from the computer to the apple tv. The reason is that you can apply the equalizer in itunes. Some will say this should be done on the amplifier but the truth be told, most people use AV amplifiers with the primary purpose being surround sound. Most people do not have multi-band equalizer in their entertainment system. I notice a difference if I pull it from the computer using the Apple TV instead of pushing it to the Apple TV.
Comment

lazyrighteye said:
I stream Netflix via ATV to my 50" Panasonic plasma every other day. Great user experince. I've prob sold 5 or 6 ATVs after friends saw mine in action.
And while my Panasonic has Netflix built in, the UI is complete ass compared to ATV - which is no surprise. Add in all the other ATV features to my Mac-based household and it really is a no-brainer at $100.
Click to expand...

Add to that the $7.99 per month (I think) entry price with Netflix, and it's a doubly good deal.
Comment
D

davidwarren said:
now if only it wouldn’t freeze….
Click to expand...

I have the same problem with Netflix on my Blu-Ray player. The glitches don't completely go away after 10pm, either. I don't know if it is the player or congestion on Netflix servers.
Last edited by a moderator: Jan 27, 2011
Comment

Now the demand has been proven, someone needs to provide a similar service in other countries, e.g. LoveFilm in the UK.
Comment
J

theBB said:
I have the same problem with Netflix on my Blu-Ray player. The glitches don't completely go away after 10pm, either. I don't know if it is the player or congestion on Netflix servers.
Click to expand...

I've used Netflix on my 360 and PS3, and have had a total of two freezing issues, out of the hundreds of times I've used it at night.
Comment

Nobita said:
Another non-news for non-Americans...
Click to expand...

Correction, it is a non-story for non-Americans and non-Canadians.

I have the original Apple TV so I cannot access Netflix on it so I have to use my PS3 instead.
Comment

MacRumors said:
While it should not be a surprise that the Apple TV is seeing strong performance when it comes to Netflix streaming due to its position as a set-top box for viewing content on a traditional TV, it is somewhat remarkable given the disparity in sales volumes between the two Apple products.
Click to expand...

That's one of the most sophomoric statements I've seen in a long while.
Comment

It's all in the connection. Whereas your Apple TV is hard-wired, and connected high speed full-time, the only way to practically watch Netflix on your ipad is wirelessly, which either means you have to be on your wifi network at home, where you might as well watch a tv, or over at&ts weak-ass 3g connection, which reduces your image quality to nothing and continually drops the audio. A big part of the problem is the iPads weak 3G antenna, which, placed side by side with an iphone, only seems to get 60% of the signal strength of the phone...

resulting in a picture like this full-resolution uncompressed png screen capture:

aristotle said:
Correction, it is a non-story for non-Americans and non-Canadians.
Click to expand...

What the dilly. Last time I checked, Canada was still in North America. Or did you guys finally give up on us completely and take off?
Comment
H

PeterQVenkman said:
People like to watch video on a TV more than the iPad? Sounds about right!
Click to expand...

Easy: Netflix is preinstalled on the Apple TV. It isn't on the iPad.


Nobita said:
Another non-news for non-Americans...
Click to expand...

1.) Someone makes a website that interests a group of people
2.) That website features ads on it to make money
3.) There is no step 3

If MacRumors didn't cover Verizon, Netflix, and a bunch of other topics that Americans (specifically the U.S. kind) care about, then their core group of readers which are (surprise) American would go to another site such as 9to5mac, AppleInsider, TUAW, or similar. Arnold Kim would start losing money, and eventually would have to go back to being a doctor in Virginia. Yeah, that's right, the founder of this site has been so successful in rumor hunting, writing stories, and picking which ones to post that he quit being a doctor so he could focus on it full time and started two other successful websites, TouchArcade.com and AppShopper.com. You can read about it in the New York Times. He knows his audience and how to pick stories and hunt down rumors. If he followed your logic, then there would be no website here for you to read. And if you don't care about there being no website for you to read, then I'd advise you leave so that you can find one that you do care about, because there are literally hundreds of thousands of people that care a lot about this website and I'm one of them. And there are hundreds of thousands if not millions of people who use Netflix or have Verizon contracts that really appreciate these stories. That's a lot of money for MacRumors to ignore! I am so glad that they don't listen to you.
Comment

I'm just wondering, does anyone here watch netflix movies on their iPad?
if so, how hot does the iPad get from watching Netflix movie?
Comment