Following the launch of the iPhone 13 models, iFixit and other independent repair outlets found that replacing the iPhone's display renders Face ID non-functional, limiting repairs to Apple itself, Apple Authorized Service Providers, and Apple-associated repair shops. The change made it much more difficult for smaller, independent repair shops to perform iPhone 13 display repairs on broken devices. 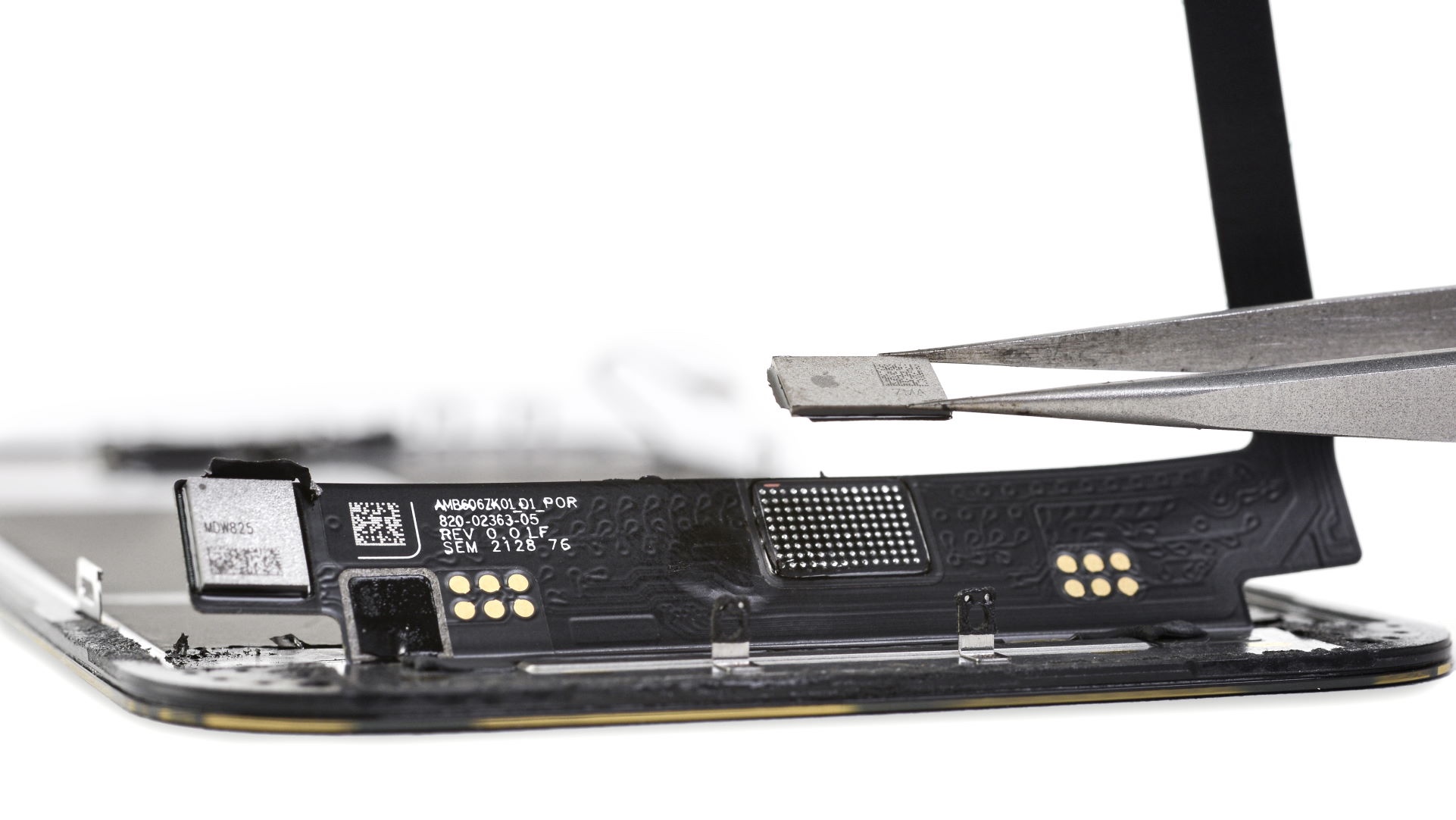 Image via iFixit​
Given the blowback from repair providers unhappy with the restriction, Apple has decided to change its policy. Apple told The Verge that it plans to introduce a software update that will allow for standard display repairs that do not disable Face ID.

With the iPhone 13 models, Apple added a small microcontroller that pairs the iPhone 13 to its display. When performing a display repair, this microcontroller must be paired to the new display using Apple's tools, which independent repair shops do not have access to. Without this pairing process, swapping an iPhone 13 display with a new display results in an error message that says "Unable to activate Face ID on this ‌iPhone‌."

Repair shops without access to Apple's pairing tools could take the microcontroller from the original display and add it to a new display, but it's a finicky process that requires soldering and a microscope to perform.

The software update that Apple plans to implement will remove the restriction that requires the microcontroller to be transferred to a new display when a repair is made, so independent shops will once again be able to repair screens without impacting the functionality of Face ID.

There is no word yet on when Apple will add the software update to simplify iPhone display repairs for independent repair providers, but iOS 15.2 is in beta testing at the current time and the feature could be introduced in that update.

Great. They should not have even put this software limitation in the first place.
Reactions: RuralJuror, antkjshop, Dysnomia and 35 others

Seems like Apple are backtracking on a lot of things lately, good news though that common sense has prevailed in this case ?
Reactions: KindJamz, DrCMD, JKAussieSkater and 17 others

All it took was one Rossman video yesterday lol
Reactions: RuralJuror, Delgibbons, DrCMD and 25 others

Shouldn’t have been implemented in the first place, pure greed!
Reactions: RuralJuror, DrCMD, JKAussieSkater and 21 others

Picking and choosing their battles better these days.
Reactions: booksacool1, robotica, tshane and 2 others
A

Why does Apple keep attempting to pull shady stuff like that? So far they’ve been forced to reverse these policies within a month or 2 from launch due to them being a PR disaster.
Reactions: DrCMD, Beautyspin, Just sayin... and 18 others

Waiting for all the people that are going to try to spin this somehow.

I wonder what the reason between the screen and Face ID sync is. There has to be a reason especially since they developed a micro controller that syncs the display with the phone. I understand why they did this part but to add Face ID into the mix doesn’t make sense. For Touch ID under the screen I can see this making sense and I fully support it but for Face ID that has nothing to do with the screen, I’m very curious why they did this to begin with.

Wondering if this is them testing screen id (Touch ID under screen) and it just made it into the iPhone 13 and Face ID happen to be a causality.
Reactions: Shirasaki and haruhiko

Awesome, this is a win for consumers.
Reactions: The Barron and thejadedmonkey

heystu said:
Seems like Apple are backtracking on a lot of things lately, good news though that common sense has prevailed in this case 😀
Click to expand...

Common sense had nothing to do with it

Public backlash is the only tool that works against Apple anymore
Reactions: RuralJuror, Hammerd, DrCMD and 20 others

The way Apple is acting about this stuff, you'd think they don't know people will find out what they're doing.

"Oh crap, you caught us. Nevermind, we won't do that."

Seriously Apple? Just don't do the shady things in the first place.
Reactions: RuralJuror, KindJamz, JKAussieSkater and 18 others

we shouldn't be praising them. They started this mess and now they have to clean it up
Reactions: RuralJuror, EddieKeyton1, Hammerd and 28 others
G

But, but! My security is compromised now! Macrumors members said so! Bring it back! ?

Did not expect that, good move. Wonder if the ********* caused this or the global iPhone market share dropping.
Reactions: booksacool1, Oblivious.Robot, willchris and 17 others

oh no, someone stole my Face ID!
Reactions: Dan Holmstock

Another instance of a code that did not need to exist in the first place. Pathetic.

Good that they will disable that via software. Hope the next iPhone onwards the hardware itself is removed.
Reactions: jimbotheitbod and Dan Holmstock
T

LOL at the entire thread of Apple defenders and armchair security experts I read here on MacRumors last week 🤣
Reactions: RuralJuror, EddieKeyton1, Hammerd and 24 others
M

and you would want to get your phone repaired by an unqualified shop why?
Reactions: MacCheetah3, Just sayin..., booksacool1 and 7 others
L

GrumpyCoder said:
But, but! My security is compromised now! Macrumors members said so! Bring it back! ?

Did not expect that, good move. Wonder if the ********* caused this or the global iPhone market share dropping.
Click to expand...

Going to assume it has nothing to do with the global marketshare.
Apple probably noticed all of the articles coming out, realized that they have several anti-competitive/right to repair lawsuits against them in the US and Europe already, and decided that this wasn’t a hill worth dying on.
Reactions: KindJamz, sideshowuniqueuser, 6h0s1 and 4 others
S

I'm not sure why they keep doing things like this and expecting a different response. This was never a good idea, and if their concern is people not knowing they've used an unauthorized repair center, there are other ways of making it clear that repairs were done by an authorized repairer.
Reactions: hn333 and klasma

Independent Repair Shops rejoice!
But this should be noted that those pesky iPhone thieves will also be on the hunt for y'all to steal and rip your beloved iPhone to parts then sell it.
Right now, in my country, the display part itself is on the rise in terms of popularity (and price).
Reactions: Red_delicious

fwmireault said:
Great. They should not have even put this software limitation in the first place.
Click to expand...

sounds more like hardware design that they are now going to opt-out of. One doesn't usually make their own costs more expensive by adding unnecessary circuitry without an actual reason*.

* blah blah, I know someone from the "profits" department forced the hardware team to add the microcontroller pairing API because everyone knows repairs are the bulk of Apple's revenue and unauthorized shops were taking a huge cut out of that.
Reactions: interessiert and turbineseaplane

I can understand wanting to ensure it's done correctly, but I'm sure a lot of this is greed and not wanting the competition. I'm dating myself, but this reminds me of the Mac clones back in the 1990's. Apple licensed Mac OS 7(?) to other companies like Motorola, Daystar and others, and some were even faster than Apple's own computers. So Apple ended that.
Reactions: JKAussieSkater, sideshowuniqueuser, klasma and 1 other person
You must log in or register to reply here.
Share:
Facebook Twitter Reddit Email Share Link
Register on MacRumors! This sidebar will go away, and you'll see fewer ads.
Sign Up
Top Bottom