Twitter today announced the results of its first ever #Awards initiative, naming Apple as the top customer service provider on the social networking platform.

Apple was awarded with the "Gold" #Customer award for the @AppleSupport Twitter account, which Apple uses to quickly respond to customer service requests. According to Twitter, the @AppleSupport account ranks #1 among support accounts for average engagements and average engagements for followers, racking up 150,000 likes and retweets since its launch. 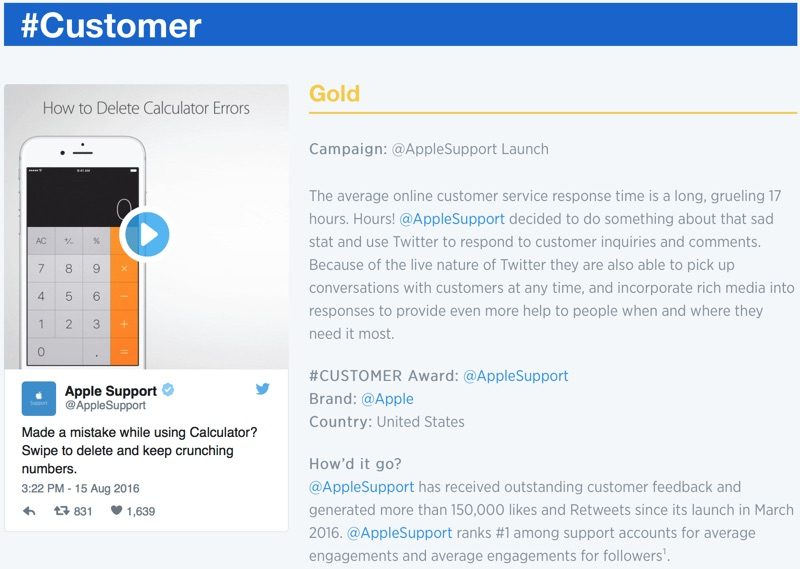 The average online customer service response time is a long, grueling 17 hours. Hours! @AppleSupport decided to do something about that sad stat and use Twitter to respond to customer inquiries and comments. Because of the live nature of Twitter they are also able to pick up conversations with customers at any time, and incorporate rich media into responses to provide even more help to people when and where they need it most.
Click to expand...

Apple interacts directly with customers through the Apple Support Twitter account and provides quick solutions to problems, often responding to requests in a matter of minutes during the hours of 5:00 a.m. to 8:00 p.m. Pacific Time.

Since its March launch, Apple Support has gained more than 524,000 followers and has shared dozens of useful product tips that often garner hundreds of likes and retweets.

No surprise here! Wish they'd use their 'main' Twitter account a bit more, though for what I don't know.

I wonder what other awards Twitter will give out? @ dril deserves one, along with the @IronSheik.
S

Maybe I should ask @AppleSupport why they don't include a built-in calculator app on an iPad.
Reactions: imronburgundy, Cameroncafe10a, Oblivious.Robot and 11 others

Not bad, but this is expected. Apple's customer service is usually pretty good.
Reactions: tyasjs

Deserved. We've owned Apple products for 30 years, and they're rock solid. When there are issues, customer service is outstanding.
Reactions: Oblivious.Robot, Insleep, Keane16 and 4 others

Maybe you should. And maybe they'll hold back their laughter while sending your question to their junk folder.
Reactions: Keane16, Tech for Kings, CB1234 and 1 other person
S

This is one of the main reasons i stick to apple products. Post purchase support is the best there is.
Reactions: Oblivious.Robot, SoN1NjA, Insleep and 4 others
P

RudySnow said:
This is well documented, snarkwad.
Click to expand...

Well "documented"? iPhone's have a nice, native one. Who cares what is documented the point is it would be very "nice" to just have an Apple solution to such a basic thing.
Reactions: AngerDanger, satchmo and RudySnow

Glad Apple got the award.

Where is the <insert product>?!!
Reactions: studio¹³¹ and aristobrat

Those people never had to deal with their customer support for a LED cinema display that LITERALLY went up in smoke a month after purchase...
S

I, too, would like to see a build-in Calculator app on the iPad. A weather app would be great, too.
Reactions: Oblivious.Robot, AngerDanger, studio¹³¹ and 3 others

While their product lineup has taken a lot of flak lately, this is an arena where Apple has remained consistently at the top. Good on them for it.

I recently had an issue with one of our devices.

◆ I went to Apple support online, which recommended calling the support number.

◆ Person on phone was competent and quick. Determined it was hardware related and made appointment for Apple store visit the next afternoon.

I'm a business customer so I don't know if this affected the level of service but I was very impressed.
M

SoApple said:
This is one of the main reasons i stick to apple products. Post purchase support is the best there is.
Click to expand...

Totally agree with that.
Had them screw up a few things but they've always made it right at the end.

There is only one company with clearly better customer service and that's Amazon. They are are so customer friendly, it's insane. Not that I would complain, but at some point it's getting ridiculous. I wonder how many people are abusing their service.

Ah! I knew MR would find a way to spin this thing negatively.

usersince86 said:
Deserved. We've owned Apple products for 30 years, and they're rock solid. When there are issues, customer service is outstanding.
Click to expand...

I'd agree there customer service cannot be beaten at the moment. But through experience I have had to use that service more often than any other brand I have owned.

Twitter is getting pretty desperate. I mean really—they're giving out awards now? They're completely losing focus and going off the rails. I get trying to position your platform as a means of customer engagement, but instead of giving out awards they should focus on making it a better platform to achieve that goal for business users.
C

Because Twitter is the gold standard for knowing about good customer services? #****off
Reactions: studio¹³¹
C

Generally, customer support experiences are atrocious. I just spent over 3 hours sorting out an account situation that was not even my fault!

However, my recent experience with Apple Support was outstanding! The phone-in system is really smart (the automated part), and the support agent dealt with my call without bombarding me with a 1000 questions to verify my identity. Just straight to the problem! It was incredibly refreshing and satisfying.