Apple is working on a new "Ultra Accessory Connector" that would be built into headphones and headsets certified under its Made for iPhone licensing program.

The connector, introduced as part of a developer preview as shared by 9to5Mac, features 8 pins and measures 2.05mm by 4.85mm, thinner and smaller than existing Lightning and USB-C ports. 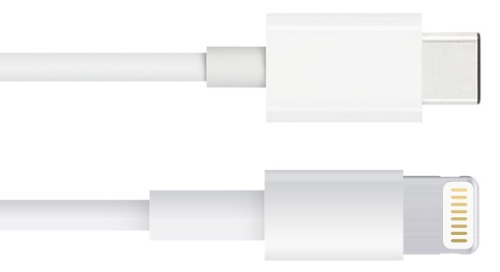 The UAC is smaller than USB-C or Lightning, both pictured​
According to Apple's Made for iPhone specifications for the Ultra Accessory Connector (UAC), it's designed to be used with headphone cables. Accessory manufacturers will be able to develop Lightning to UAC, USB-A to UAC, and 3.5mm jack to UAC cables, connecting to a UAC port built into an accessory for charging and audio purposes.

Such a port could perhaps be built into products like Beats headphones, which currently use micro-USB for charging purposes, and it could save internal space manufacturers could use for other components.

Why Apple has developed a new port rather than encouraging manufacturers to adopt USB-C or Lightning is unknown (there are already MFi specifications for Lightning ports), and it is also unclear if Apple will allow accessories beyond headphones to use the new Ultra Accessory Connector in the future.

Update: As Ars Technica points out, the "Ultra Accessory Connector" is a new name for an existing port that's already used in digital cameras and other accessories.

Apple told Ars Technica that the port has been added to the Made for iPhone program at the request of licensees, not because it is trying to push accessory makers to adopt a new type of connector.

Similarly, sources told The Verge that Apple has no plans of replacing Lightning or using this port on any of its devices -- it will be used as "an intermediary in headphone cables."

Making work for themselves... just stick to one standard and end this madness!
Reactions: Moorepheus, iPadCary, piecloud and 53 others

This is very strange and interesting...

EDIT: The update has cleared things up. It is an unusual move but its not what people originally thought.
Last edited: Feb 6, 2017
Reactions: MrUNIMOG, coolfactor, Deelron and 3 others
B

This is no less than "Death By A Thousand Cuts". Why do we need another port when we can't connect our computers to our phones without a dongle? We can't trust the bluetooth hardware to pair 100% of the time all the time with zero hiccups? Groan
Reactions: Moorepheus, iPadCary, Avieshek and 13 others

New Beats have a Lightning port rather than a microUSB one...
Reactions: Avieshek and Opieap13
D

I'm sure most people will go nuts about this, but i'm all for a tiny charging connector as long as micro-USB and mini-USB both die, they along with USB-A are the worst three connectors ever designed.

Stop. For the love of God Apple, just stop.
Reactions: hachre, Moorepheus, iPadCary and 34 others

I'm gonna need a suitcase for my dongles.
Reactions: hachre, iPadCary, Avieshek and 27 others
T

What the?! Ridiculous
Reactions: Avieshek, dan110, d0nK and 1 other person
C

This makes sense if your business is built on selling dongles. Adopting USB-C for iOS devices would be too simple.
Reactions: dan110, JamesPDX, d0nK and 7 others
P

Are there any major tech shifts you've actually navigated since 2008?
Reactions: gamrin, xalea, fzfpff and 2 others

Please no, not another prorpetary connector. Please Apple if you go down this route make it royaly free.
Otherwise you are just re-inventing the wheel for the sake of it.
Reactions: Moorepheus, Rookbird, d0nK and 7 others

Why Apple has developed a new port rather than encouraging manufacturers to adopt USB-C or Lightning is unknown (there are already MFi specifications for Lightning ports), and it is also unclear if Apple will allow accessories beyond headphones to use the new Ultra Accessory Connector in the future.
Click to expand...

Money. It makes it easier to charge a premium for accessories.

This is seriously rage worthy.

Either adopt USB-C or put this new standard on the new macbook pro's. I hate that I can't use the SAME headphones for the iPhone and Mac.
Reactions: hachre, Moorepheus, calaverasgrande and 11 others

so when they said switching to lighting was future proofing, they just meant for a few years. So yet another plug....what happened to apple and simplicity.
Reactions: sddave, dan110, xalea and 1 other person

Ultimately, this seems to create more confusion in some area's and gives options in others. I feel one primary option would be an easier solution for general purposes, to at least eliminate any distortion.
M

DaPizzaMan said:
Making work for themselves... just stick to one standard and end this madness!
Click to expand...

Right, stick with USB-C for charging on laptops and end the MagSafe madness.
Reactions: robeddie
T

It just gets better and better. I swear that they do this just to get press. Sound familiar?
Reactions: calaverasgrande and dan110
K

dannys1 said:
I'm sure most people will go nuts about this, but i'm all for a tiny charging connector as long as micro-USB and mini-USB both die, they along with USB-A are the worst three connectors ever designed.

I think you'll find that USB-C is not better. It is actually bigger than micro-USB, requires fine pins and tight tolerances (as I mentioned, one of my USB-C ports will not lock into one of my Apple cables... even Apple can't make them right), the cables require thick wires for charging support plus large number of data pairs, or else you have a confusing compatibility problems (you grab a random cable from home then realize it can't charge your Macbook Pro, or you plug in your external hard drive with the bundled Apple cable and only get USB 2.0 speeds). Now you find cheap Chinese vendors are cutting corners and making cables that cause hardware damage and fires.

It's a do-it-all standard with the inevitable expense and compromises.
Reactions: elliotsen, d0nK, robeddie and 6 others