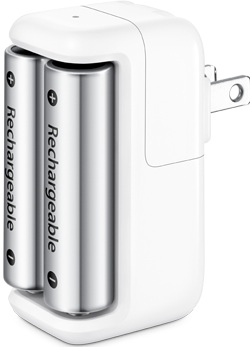 One of Apple's more interesting product announcements today was its Apple Battery Charger, designed to keep the company's increasing array of wireless peripheral devices powered up. While we briefly mentioned the release in our coverage of Apple's new Magic Trackpad that utilizes the rechargeable AA batteries Apple is now offering along with the charger, the batteries and charger themselves bear some closer examination. 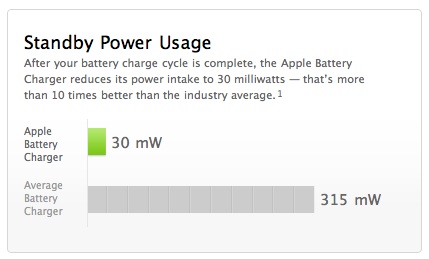 Apple touts that its new battery charger carries the industry's lowest "vampire draw", a measure of power consumed while not actively in use for its intended purpose.

The Apple Battery Charger sets a new industry standard: It has the lowest standby power usage value - or "vampire draw" - of any similar charger on the market. That's the energy most chargers continue to draw after their batteries are fully charged. But the Apple Battery Charger senses when its batteries are done charging and automatically reduces the amount of power it needs.
Click to expand...

The company also points to the AA batteries themselves, which are designed to maintain a full charge through hundreds of charge cycles and last up to ten years. The batteries also maintain their charge while simply sitting in a drawer, retaining up to 80% of their charge after a year on the shelf. Six of the NiMH AA batteries are included with the charger.

As is to be expected, the Apple Battery Charger offers traditional Apple styling, offering the same rounded white plastic design as other power devices from the company, while also utilizing the same removable plug with fold-up prongs to allow for interchanging adapter fittings.

So far my 4 year old RadioShack battery charger has done a great job. In the past five months is gets a lot of use recharging my Magic Mouse batteries every 3 weeks
X

who's lining up to get the charger? i'm pump'd

xtend said:
who's lining up to get the charger? i'm pump'd

I am in the queue. I ordered two today for our iMacs here.
M

They're great! My mouse feels more snappy. If you know what I mean.
E

If I didn't have my BC-700 I probably would have gotten this, though they really are seperate products. The maha/la crosse chargers are more like Cell Maintenance Suites instead of chargers lol
V

sounds really interesting... can't wait to test it out!
E

Bravo.. I really like my Sanyo Eneloops... so I'm hoping Apple Batteries are at that level...

So the battery cells themselves are like Eneloops? I have a few Duracell batteries that are rebranded eneloops and I'm liking them so far. How much will apple be charging for batteries though?

*edit* oop, you meantioned eneloops above me as I was typing it out

It needs to be called iCharge
M

A wired version of the Magic Trackpad uses even less power, is cheaper to produce and will always work. Apple should go greener.

It's just like Apple to take something simple and make it even better. Way to go, Apple!
I

Batteries themselves have no Apple branding. They're probably just OEM'd Sanyo Eneloops, which wouldn't be bad as I have lots of them and they work GREAT. I have a set in my camera bag and when I need to use the flash, they've never failed, even after sitting for months.
K

So... what kind of batteries can it charge? And can it be plugged into all frequencies and voltages with the appropriate plug adaptor?

I actually think this is one of Apple more innovative things, albeit small.

This could actually be really helpful compared to some of the other battery chargers out there. Not to mention it comes with a decent number of batteries  and they're saying a lifespan of 10 years!

And in the very least, they're at least better than those iPod Socks

Vantage Point said:
So far my 4 year old RadioShack battery charger has done a great job. In the past five months is gets a lot of use recharging my Magic Mouse batteries every 3 weeks
Click to expand...

Every 3 weeks, what the heck are you doing? I am just getting ready to change my for the first time. I got my MM on day one.

Maybe Apple should figure out how to make a better electric car too. But, then again, it would be frustrating if your house didnt have their proprietary wall plugs and garage size. Darn it.

HiVolt said:
Batteries themselves have no Apple branding. They're probably just OEM'd Sanyo Eneloops, which wouldn't be bad as I have lots of them and they work GREAT. I have a set in my camera bag and when I need to use the flash, they've never failed, even after sitting for months.
Click to expand...

I was thinking the same thing. Love those little white batteries.
T

You know you're on a fanboy site when there is this much excitement about a friggin' BATTERY CHARGER!

Actually, it'd be a lot nicer if the batteries were re-chargeable within the devices THEMSELVES.

Cardiff by the Sea

Out of today's announcements, I'm mostly excited about the charger.

Q: Are those batteries Apple-branded too?

This beats my Powerex MH-C9000 how? Oh yeah, it does not. I don't see cycling, break-in, or refresh and analyze. At best, this is something that you can get at Wal-Mart for 10$.

As to the vampire pull... I unplug mine when done with it and usually put it into my Pelican case. Is it that hard to unplug them when not in use?
You must log in or register to reply here.
Share:
Facebook Twitter Reddit Email Link
Top Bottom