A number of MacRumors readers are reporting that iCloud services are currently down, and based on the number of reports it appears that the outage is quite widespread. Apple's iCloud system status page is currently acknowledging access issues, although there is no estimate of the proportion of iCloud users being affected. 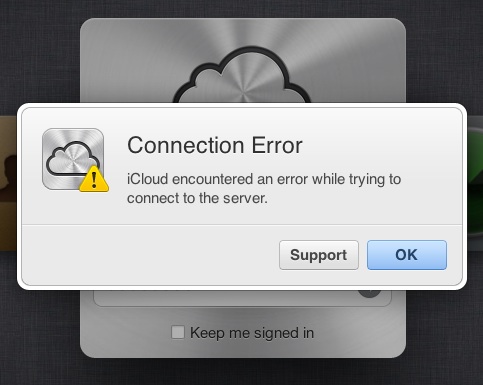 Beyond iCloud, Apple's iMessage service also appears to be down, with messages failing to go through as the sending process hangs prior to completion.

Update: Users are also reporting problems with Apple's developer portal and iTunes Store access, although pieces of Apple's online services do appear to be coming back online. We're even hearing that Apple may have experienced Internet issues for its own employees at its Cupertino headquarters.

Update 2: Apple has updated its iCloud system status page to note that "some" users are affected and that service will be restored "ASAP".

Update 3: Roughly two hours after reports of the issues began surfacing, Apple now notes on its iCloud system status page that all services are back online.

Also down is the App Store on iOS devices. Keep getting the "Cannot connect to iTunes Store" message.
A

I was just going to send an email but iCloud.com would not load. Then I come to MacRumors and see that there's an outage.

Edit: iCloud.com is back up for me.

Itunes and developer.apple.com as well

Its impossible to logon to itunes at the moment, developer.apple.com is down as well

iMessage is down here. A quick Twitter search shows its down for quite a large amount of people too.

Welcome to the world of Cloud computing when access to your data is in the hand of someone else and stored somewhere else.

You just know sooner of later it's all going to go pear shaped.

The difference is, when it goes wrong, BOY will it go wrong.

The Netherlands here. Not connecting either with Apple Mail.
iCloud webmail signs in, but takes a while to show my emails.
R

Its working for me. I must be lucky..
M

Intell said:
Also down is the App Store on iOS devices. Keep getting the "Cannot connect to iTunes Store" message.
Click to expand...

my app store is working fine. imessage is indeed down however. I didn't even know until i read this and went to check on a message i had sent 20 minutes ago. It was hung up... come on apple, these things CANT happen, especially on a weekday.

I have no iMessage, this reminds me of all the times blackberrys servers are offline.

This happened to me last week! But right now it's working fine.

RayK said:
Its working for me. I must be lucky..
Click to expand...

Just got the topic notification in here. Was not working as I typed my post.
B

I second that, FaceTime is def down, no error messages, just never connects to the other person. Ughhh

EDIT: WOrking for me now was down

iTunes match is having issues as well.

getting nothing here in the UK. imessage/ itunes/ icloud etc.. all failing...
1

I've been having problems for a couple of days with Messages on my Mac. It can't connect to the server. But iMessage on my iPhone works fine.
3

Siri has taken over!

So what? It will be fixed pretty soon anyway. Apple is not a company that would have its services down for days.

Lack of Reliability is the downside of "the cloud". If you can't get your files, your screwed. Mind you, so far, iCloud has been OK.
B

This is why I prefer to have everything stored locally on my device and end up getting the highest capacity I can. A huge drawback of cloud computing is that someone else has to maintain your access.