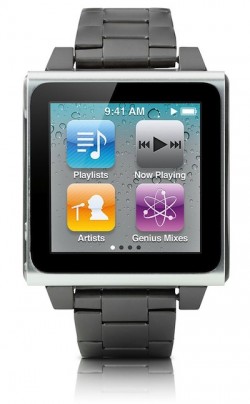 Piggybacking on Bloomberg's latest report about Apple's "iWatch" plans, The Verge has weighed in with its own claims about the project. Most notably, the report's sources claim that Apple is planning for the watch to run a "full" version of iOS rather a simpler operating system such as that seen on the iPod nano.

Interestingly, we're also told that Apple's chosen to rework the full iOS to run on the watch instead of building up the iPod nano's proprietary touch operating system -- although the previous nano was already watch-sized and seemed like a great starting point for a watch, Apple's betting on iOS across product lines.
Click to expand...

Given the constraints of a watch-sized display, it seems clear that this full version of iOS would still have some limitations in terms of feature support. But a watch-specific version of iOS could make app support more straightforward for both Apple and third-party app developers.

Apple's desire for the watch to run iOS is causing the company some difficulties, however, as The Verge reports that prototypes are currently seeing subpar battery life.

[T]he goal is to last at least 4-5 days between charges, but the current watch prototypes are apparently only going for a couple days max. We're also told Apple has some work to do with iOS on the iPhone, which currently has several hooks for supporting a watch-like device but lacks the appropriate interface or settings to make it work properly.
Click to expand...

Rumors of an Apple smart watch have been rapidly gaining steam in recent weeks, suggesting that the company may indeed be moving the project to near the top of its priority list. An Apple television set had been the front-running rumor for Apple's next major product, but its development has reportedly been slowed by content negotiations.

can't wait to have to charge my watch every day.
G

maybe if the include induction charging in a stylish dock-like mount to put on your bedside table, they could pull off a battery life like that. But it seems weird that having 2-3 days between charges be more of a problem than 4-5 days...
M

Is it water-resistant up to 200m with underwater button operations permissible?

I remember when this site was about iPhones and iPads, not these kiddy iWatch toys. What has happened to Apple?
A

levitynyc said:
can't wait to have to charge my watch every day.
Click to expand...

I'm pretty sure it will be wireless charging.. So its the same as laying your watch on your nightstand at night while you sleep. Meanwhile it will charge and sync your data with your iMac as the iPhone does now.

Full iOS running on a display that small could point towards an iPhone Nano in the future.

why not an adaptation of the automatic watch mechanism, instead of winding a spring, charges a battery as you move your wrist around.

Battery life is an issue in all Apple´s devices.

Battery already lasts a couple of days? That's more than enough for me.

Just because it has a few teething problems, it doesn't make it a bad idea. The watch will be amazing.

I've got a Nike FuelBand and charge it every 4 days, just plug it into my laptop whilst I'm dossing on MacRumors. So does Tim Cook.

oh damn.. I forgot to charge my iWatch today.

This makes me seriously doubt the previous suggestion about it coming out as soon as this year. It seems like they still have a lot of kinks to work out before it can reach mass production.
Last edited: Mar 4, 2013
M

Maybe I completely lack vision but this doesn't just feel like a category upsetting breakthrough like the iPhone or iPod was. Is a potential iWatch the kind of thing no one realized they had to have?...
S

It's becoming clear that THIS is Apple's next big thing... Not a TV.

They're going to try to do to wearable computing what they did to the tablet and smartphone markets. Will be interesting to see the competition between this and Google Glass.

I remember when this site was about Apple computers...
J

Moonjumper said:
Full iOS running on a display that small could point towards an iPhone Nano in the future.
Click to expand...

How would you make calls practically on something that small? Dig into your pocket for a headset every time it rings?

I wish Apple would move the MacPro to the top of their list...
T

Running full iOS on this would be a huge error.

To run full IOS rather than a gimp nano OS, now that is a good news.

this could represent the IOS as apple Post-PC operating system.

I just wish they'd put the resources into finishing some of the products they've already started, before racing off to the next thing. Everything that's come out in the last few years seems like a promising but incomplete project.