Back in February, iMore reported that Apple was working on a smaller dock connector for its iOS devices, seeking to shave the size of the current 30-pin connector in order to allow its devices to shrink further and to provide space for other components.

Rumors of the smaller dock connector have persisted in the months since, and with claimed rear shells for the next-generation iPhone showing a smaller opening for the dock connector it does appear that Apple will be rolling out the new design with its next iOS device launch.

TechCrunch now reports that it is hearing more about the smaller connector, including word that it will include 19 pins for connectivity.

Although the form factor and actual size are still unknown, TechCrunch has independently verified that Apple is working on adding a 19-pin port, replacing the current 30-pin port, to the new iPhone. It is a move that will surely send shocks through the iPhone accessory ecosystem.
Click to expand...

TechCrunch's report comes as Mobile Fun shares several case drawings and renderings from a case manufacturer who is betting that the parts leaked so far will prove to be genuine.

One manufacturer we spoke to said that he was sure that the leaked images were accurate - so sure that he was already preparing to construct iPhone 5 cases and he'd be willing to ship replacements for free if they turned out not to be perfect. He enumerated three big changes from the old iPhone 4S to the iPhone 5: 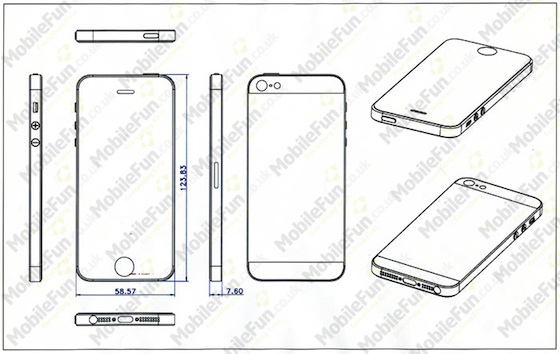 Based on the post, the drawings and renderings seem to have been created by the case manufacturer as it works to design its cases for the already-leaked form factor, and thus do not appear to be actual design leaks from Apple's supply chain. 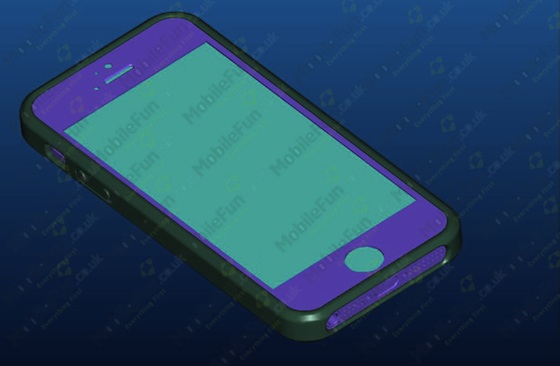 Case designs were of course one of the primary sources for rumors of a dramatic "iPhone 5" redesign last year, a design that did not come to pass as Apple kept the basic iPhone 4 form factor and instead upgraded the internals to yield the iPhone 4S.

But the situation is different this year, with the rumors being driven by what appear to be legitimate leaks of actual parts and case manufacturers now responding to those leaks rather than driving the rumors themselves in the absence of part evidence as they did last year.

Update: Robert Scoble has added his thoughts in a comment on TechCrunch's post, claiming that he has learned from an industry contact that Apple's new dock connector will be magnetic much like the MagSafe connector used on Mac notebooks and that it will include chips to verify licensing of accessories to be used with the devices.

Just don't make the back out of glass! Why have both sides shattered when just the front will do
F

Glad I didn't buy any accessories for my 4S yet, now I will just wait and get the new phone, problem solved.
B

the "iPod" connector as been the same for more than 10 years already. Change is just a matter of time.

Deja vu, all over again.
But this time this rumor may be true.
Let the leaks begin..
C

It makes sense, if they're going USB 3, why not change it already? Especially with Ivy Bridge...

I wish it is MicroUSB though. A universal connection would be lovely.

Seems all the rumors are coming together.
B

Come to think of it, it does make sense that Apple could do with less pins this time around. When the first dock connector came out it was sending USB, FireWire, Audio and Power signals over one cable. Times have changed and it makes sense to refresh the connector... even if it means everyone has to go out and buy new cables/adapters/accessories.

I'm just hoping there will be a 30-pin (old style) to 19-pin (new style) adapter! Even if just for charging the device.
T

Grimace said:
Just don't make the back out of glass! Why have both sides shattered when just the front will do
Click to expand...

I must be the only one that likes the glass back. The thing is glass doesn't scratch the way metals do, but is far more appealing to the touch than plastic. The whole glass shattering thing doesn't make a difference to me because I never want my phone to drop anyways. Reducing the chance that you'll damage something to a coin toss doesn't make dropping it any less disastrous in my eyes.

I am still not adjusted to the idea of a stretched iPhone 4 but I'll wait until I see some real specs to judge.

As far as a smaller dock, I was ready for that 5 years ago.
M

I hope that's actually a USB port. That would be ideal.
G

I honestly think this will be the first Mag-safe Thunderbolt port.
K

Given the age of the dock connector and that after all this time not all of the pins/channels are utilised, combined with the standardisation of USB charging and the advent of AirPlay, is it not possible that Apple might have decided that now is the moment to phase it out and move to docking via Micro USB (3, even), with analogue audio and composite video output through the now adjacent 3.5mm socket?
S

Apple uses standard ports on its Macs (Thunderbolt, USB, etc) but not the iPhone.

I could be wrong about this, please correct me if I am.

LimeiBook86 said:
I'm just hoping there will be a 30-pin (old style) to 19-pin (new style) adapter! Even if just for charging the device.
Click to expand...

pezj said:
Seems a bit much. Why not just get a new usb to apple port cable?
Click to expand...

Think about boomboxes and other accessories that use the 30-pin connector.

GREEN4U said:
I honestly think this will be the first Mag-safe Thunderbolt port.
Click to expand...

ACtually, that's what I've been thinking since I saw the first drawings and then again when I saw the new MagSafe 2 at WWDC. If they are going to make a change, why not just make it a mini-USB like every other phone manufacturer.

I think of all the money I will have to spend on new stereo connectors and power adaptors, I get really bummed

And what's with the headphone jack being on the bottom? Why make such a silly change?

I'm surprised there's no "Mobile MagSafe", makes much more since for the magnet design in a phone setting. I always trip over mine, or am pulling to hard and ware my cords out.

Yes please. Syncing a 64GB iPhone is not fun
J

I guess my iHome clock won't work on the new iPhone.
S

I think the new iPhone would be similar to the current retina macbook pro annoucement ,first they'll uprgrade the current iphone a bit maybe lte,nfc,ios6 and then introduce "the next generation iPhone" which will be bigger,more powerful etc and maybe some killer feature.This way they keep everyone happy and can keep next-gen iPhone at higher pricing.
M

So I can charge my camera, another phone if I need to, or anything else that uses the ubiquitous Micro USB, all with ONE cable?