Apple designed a Smart Keyboard Folio for the 11- and 12.9-inch iPad Pro models, but while it's super slim, it's also expensive and with flat keys that some iPad users might not like.

Luckily, third-party companies like Zagg and Logitech have come out with some alternate iPad Pro keyboards, and in today's video, we're comparing the Smart Keyboard Folio from Apple to two popular alternatives - the Slim Folio Pro from Logitech and the Slim Book Go from Zagg.

Both third-party keyboard options are cheaper than the Smart Keyboard Folio from Apple, which costs $179 for the 11-inch iPad Pro and $199 for the 12.9-inch model, so you can save a decent amount of cash with a third-party option. 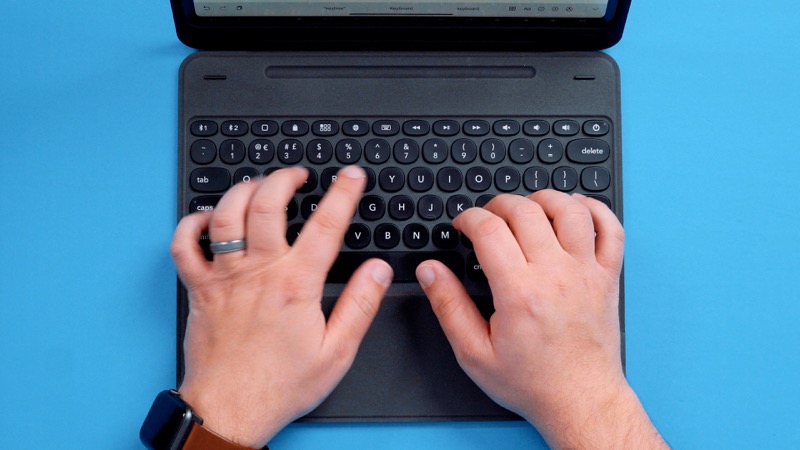 Zagg Slim Book Go​
Of the two, the Slim Book Go from Zagg is the heftier model, but both are pretty bulky. If you're someone who prefers a device without a thick case on it, these keyboards may not be for you. There are, however, some benefits to these cases beyond price, such as the feel of the keyboard.

The Smart Keyboard Folio from Apple has flat, fabric covered keys that have little travel and don't feel much like a standard keyboard. Zagg and Logitech's solutions, though, are thicker and thus accommodate keys with more travel, a more satisfying press, and just a better overall feel.

The Slim Book Go from Zagg is designed to protect the entire iPad Pro, providing solid drop protection. The case itself is made from a hard plastic, while the keyboard has a cloth feel on the front and felt material surrounding the keys. 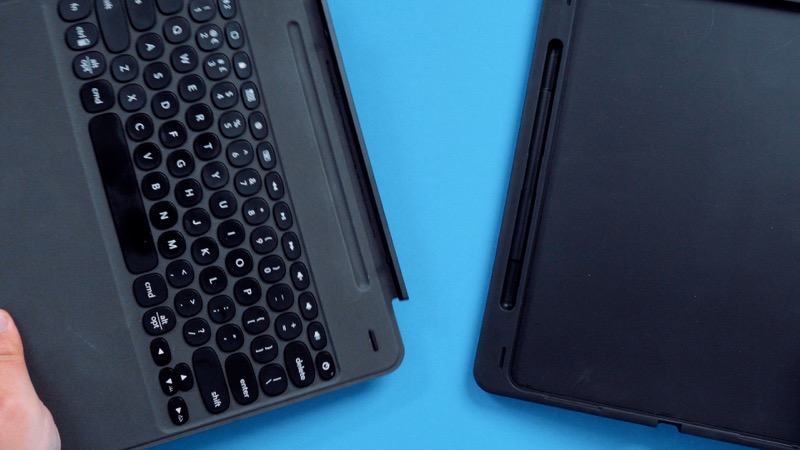 Zagg Slim Book Go​
You can detach the keyboard cover from the case if you want, leaving just the case itself on the iPad. Zagg left a lot of space at the bottom of the keyboard on the Slim Book Go, so it's comfortable to rest your wrists, but when using it on your lap, it's wobbly.

That's not a problem in a situation where you're using it on a desk, and with the adjustable stand there are multiple viewing angles, something you don't get with Logitech's version. The keyboard is pleasant to type on, but there's no backlighting for the keys. It's not clear why, but there's no sleep/wake function in the cover, so shutting it won't turn off your iPad. Multi-device support is included, something not available in the Slim Folio Pro. 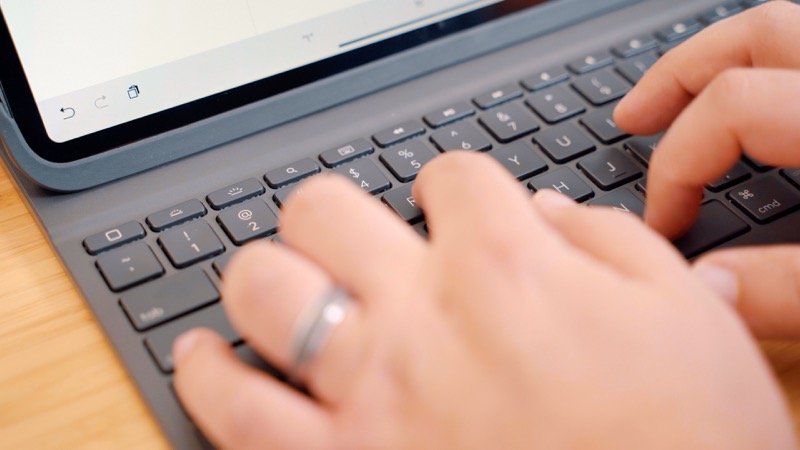 Logitech Slim Folio Pro​
Logitech's Slim Folio Pro, unlike the Slim Book Go, is all one piece without a detachable keyboard option. It has a thick rubber frame that protects the iPad, and a single viewing angle for using while typing.

The Slim Folio Pro and the Slim Book Go both offer a better typing experience than the Smart Keyboard Folio for those who like more traditional keys, but we preferred the feel of the Slim Book Go a bit more because the keys have more travel and a more satisfying click. On the plus side, it's a bit less bulky and not as heavy, and it has backlit keys, a nice bonus feature. 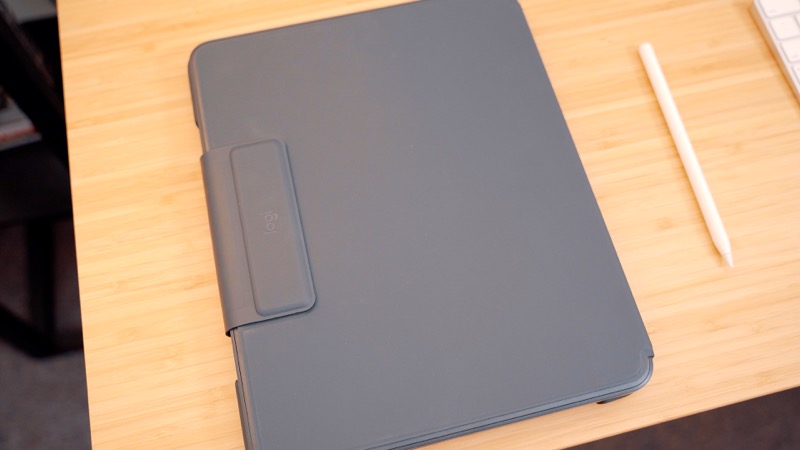 So which should you choose? If you hate bulk, get the Smart Keyboard Folio or plan to remove these keyboard cases when not in use, something that can be a hassle.

If you want the best typing experience that's closest to a laptop and don't mind the thickness, choose the Zagg, but if you want something a bit slimmer with backlighting and more stability for on-lap use, choose the Logitech (and make sure to check out our full review). You can, of course, choose none of the above and opt for a much cheaper standalone Bluetooth keyboard.

Which iPad Pro keyboard do you prefer? Apple's, Logitech's, Zagg's, or something else? Let us know in the comments.

Apple keyboard folio def not thin enough. Needs butterfly keys since they'll be sealed and won't manage to get crumbs or sand stuck inside. And since iOS has peaked why not add Touch Bar while you're at it since that will surely make consumers see it as a laptop replacement. /s
Reactions: ooh456, Marekul, maxfm and 6 others

None of the above. Since the keyboard is something I only occasionally use, I bought the plain folio and use that day-to-day. I will carry the Apple Bluetooth keyboard if there's a chance that I will do any typing. It's a much better typing experience and still quite portable for those times I might actually use it.
Reactions: jagooch, PeterJP, PlayUltimate and 2 others

I like the apple keyboard I just wish it had backlight and thats really it.
Reactions: jagooch, iModFrenzy, panther quest and 7 others
A

Was hoping to see the Brydge reviewed but I guess it's not shipping yet.
Reactions: pelegri, andyroberts, gadgetfreak98 and 4 others
J

Slim Book Go
Slim Folio Pro
Smart Keyboard Folio
​
With names like these, would’ve been nice if you instead used Apple, Zagg, Logitech.

I think.
Reactions: jagooch, yoyo kayak, SDJim and 13 others

alphaswift said:
None of the above. Since the keyboard is something I only occasionally use, I bought the plain folio and use that day-to-day. I will carry the Apple Bluetooth keyboard if there's a chance that I will do any typing. It's a much better typing experience and still quite portable for those times I might actually use it.
Click to expand...

Same here. I bought the Slim folio and have my iPad Pro paired with a Magic Keyboard. Best of both worlds - a gorgeous slim cover and a brilliant keyboard that I can leave at home if I don’t need it.

I bought the Apple keyboard folio and returned it the next day, swapping it for the Smart Folio. I found it awful to type on and it felt a bit like a rushed design if you ask me.
Reactions: maxfm

One other big keyboard player to mention is Brydge. They’re shipping their new keyboards this month and have already given some prototypes to a few different sites for a hands-on with positive impressions. Unlike the three keyboards reviewed here, the Brydge keyboards use hinges to turn the iPad into a traditional laptop clamshell device that allows any viewing angle, and the keyboard itself is very similar to the scissor keyboards on pre-2016 MacBooks. I’m looking forward to getting mine soon.
Reactions: jagooch, pelegri, gadgetfreak98 and 3 others
L

No mention that the Zagg seems to be the only one with a Fn key? That alone is motivation enough for me.

With all keyboard covers I've used, I've hated not to be able to forward delete. For me, that's truly what keeps the iPad experience from being comparable to a the one of a MacBook pro, and a constant annoyance ever time I want to delete some text and find myself bringing up the on-screen keyboard instead...

Is forward delete considered out-of-fashion and en route to be eliminated like the floppy or CD drive...?
Reactions: jagooch, SDJim and Donfor39

I've used the Apple Bluetooth keyboards. They work. BTW: Are the new ones 'butterfly'? If so, Logitech for me.
Reactions: Donfor39

Nice! Is this compatible with my 2018 MacBookPro?

I really wish they would've done something with all that space at the bottom of the Zagg Slim Book.

The obvious solution is of course adding a cutting board to the keyboard so you can prepare your favorite snacks while watching something on your iPad.

Hell, break out your ultra-thin titanium Apple Card and you've even got a knife!

Honestly I've never had any problems with the regular smart keyboard, other than the price. its a great but if you have an iPad Pro or even an Air.
Reactions: gadgetfreak98
J

I got the Zagg because I didn't want to wait for the Brydge.

Just two corrections...it does have a backlight, with selection of 7 colors. And it does sleep/wake my iPad Pro 11”...

It’s a little bulkier than the Apple keyboard folio, but I like the adjustable kickstand, the feel and backlight of the keys and the protectiveness of the case...plus it’s cheaper. And the two storage locations for the pencil are nice as well.
Reactions: jagooch, laucutus, Donfor39 and 1 other person

Many people cite the smart connector as an advantage in Apple’s keyboard, I actually found it very inconvenient, it drains the battery so fast, even during the night when not in use. I documented my experience and have graphs for those who want to see it.

On the other hand, Apple’s keyboard is very loose on the 11 inch, it is slightly stronger on the 12.9 in but it is not protective enough, in the week I had mine my iPad came loose several times and at one instance I got a dent on one corner.

A week was enough for me to return the keyboard. I have a third party I bought on Amazon, it works flawlessly, I can turn it on and off whenever I want, the case is protective and it costed 1/4 of Apples version... and the keys feel better and are backlit!
Last edited: Apr 12, 2019
Reactions: jagooch, EvilEvil, dantracht and 1 other person

I have the smart keyboard from Apple and love it
Reactions: DianaMR, Lucky11 and StyxMaker

I wanted the Apple one, but I read a lot of negative reviews about the smart connector for the 10.5 pro.. lots of complaints on it so, unfortunately, I had to avoid it.
Reactions: robjulo and lagunab
K

the sad thing is all these keyboards are better than the butterfly disaster on the MacBook Pros ...
Reactions: jamesrick80
D

As others have said I would appreciate backlit keys very much, but the Apple Smart Keyboard is really fantastic. I wouldn’t even consider the other options I have seen as they take too much away from the extreme portability and seamless functionality of the iPad.
Reactions: DianaMR, panther quest and StyxMaker

How do you use folders in iPad dock?

---
Never mind. Figured it out. Just drag a folder to dock

I was scared away from trying the logitech keyboard on my previous-gen iPad Pro because most of the reviews indicated that it scratched the screen after a couple of weeks of use. Have they fixed that problem with this iteration?
Reactions: lagunab
4

spitcoff said:
I have the smart keyboard from Apple and love it
Click to expand...

I really think the most underrated thing about the Apple keyboard is the soft-like fabric. It’s so comfortable to use, especially for an extended period of time, other keyboards can be uncomfortable at times, and the Apple keyboard delivers in that aspect.
Reactions: DianaMR, dannynjoni, StyxMaker and 1 other person
You must log in or register to reply here.
Share:
Facebook Twitter Reddit Email Share Link
Register on MacRumors! This sidebar will go away, and you'll see fewer ads.
Sign Up
Top Bottom