The Audio + Charge RockStar is designed for iPhones that lack a 3.5mm headphone jack, which includes the iPhone 7, iPhone 7 Plus, iPhone 8, iPhone 8 Plus, and upcoming iPhone X. 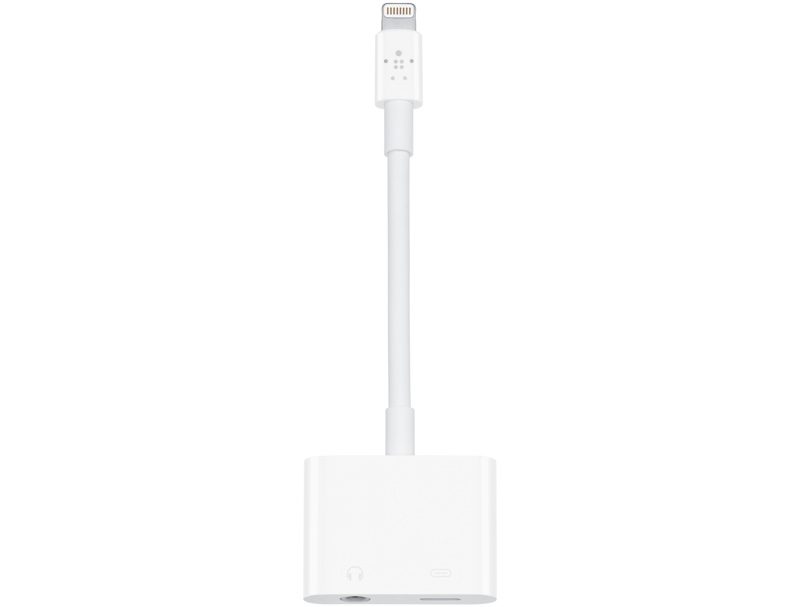 A Lightning connector on the adapter plugs into the Lighting port of an iPhone, providing both a 3.5mm headphone jack for use with standard headphones and a Lightning port where you can plug in a Lightning cable to charge at the same time that you listen.

Belkin has built 12W pass-through charging into the Audio + Charge RockStar, so your iPhone will be able to charge at maximum speed. It supports any audio jack that uses a 3.5mm connector and is compatible with most cases.

Belkin's 3.5mm Audio + Charge RockStar adapter can be purchased from the Apple Store for $34.95 or directly from Belkin for $34.99.

its an option.. but seriously what a mess of cords to charge a devices and listen.
Reactions: Delgibbons

I suppose this has functionality if you are sitting at a desk or need to run it though some speakers via an audio cable which you can also accomplish with an Apple dock since they have Audio Out.

But for charging and listening, plug the phone in (or put it on a mat) and use some Bluetooth headphones. Much more freedom.
T

Finally. I thought the old version was weird with 2 lightning ports that required you to attach the other 3.5mm adapter to this adapter. Hopefully this one is better quality as well. The last version had a lot of reports that it broke within a few months.
B

A year late.
Reactions: jezbd1997, Huck, avtella and 1 other person
U

Welcome to the future (it's not what you expected)
Reactions: jezbd1997, SantaFeNM, Delgibbons and 7 others

I have the older version of this, with the two lightning ports. It's unreliable, sometimes dropping the audio signal and playing audio through the phone. I'll give this a shot though.

Perfect for people who need to charge their phone in the car and also want to connect to the radio via audio jack.
Reactions: dwaltwhit

Revolutionary! Such courage!
Reactions: Glassed Silver and InuNacho
A

I am still angry at Apple for not finally switching over to USB C. I love it on my MacBook and it would be so useful to finally get rid of this terrible lightning “standard”

I can has audio controls via earpods? Cheaper ones do not allow this...

How was this launched today? I received mine last week when I ordered it with my iPhone 8. And yes it's the model with the headphone jack, not two lightning ports. Weird.

If only the new iPhone had this capability built in....
Reactions: Glassed Silver and Huck

UnalignedByte said:
Welcome to the future (it's not what you expected)
Click to expand...

This isn’t the future. It’s not letting go of the past.
Reactions: JTToft, QuarterSwede, cbaca51 and 1 other person

So, for $5 less, we have an adapter that has a headphone jack now.

WHERE WAS THIS LAST YEAR?
G

Wonder if China will make a knockoff of this that actually works. If they do, I'd be interested tbh.
P

What’s next? A cassette tape adapter? I mean come on folks it’s 2017. Just get some modern headphones and be done with it!

Not everyone has has money to burn on new headphones.

I don't know about the quality of this adapter at all, but please people stop with all the 'get over the past' comments, it's just silly. There are advantages and disadvantages to both wired and bluetooth headphones, but it's still ultimately just about getting audio from the data on the device to analogue sound waves you listen to. You want lower quality cable-free earphones that regularly need charging then fine, but don't pretend you are the Jetsons.
Reactions: SomeSwede, Glassed Silver, InuNacho and 1 other person

Not everyone needs it for headphones. I need mine for the aux in on my car's radio.
Reactions: ignatius345, unobtainium and kevm

Convenience aside, not everybody is excited about using Bluetooth headphones.
Reactions: jezbd1997 and ignatius345