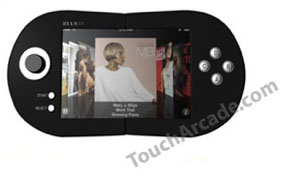 At TouchArcade, we have posted an image of what appears to be a Belkin gaming controller accessory for the iPhone. The ad copy of the accompanying image claims that the new "JoyPod" will provide App Store support. If true, this means Apple will be incorporating official support for the accessory in the iPhone SDK. Other features listed include:

iControlPad is another control pad accessory for the iPhone that has been under development, but without Apple's involvement, that controller may be limited to Jailbroken apps.

I really hope to see something like this soon since it would make for a far better input device for a wide range of (then possible) games on the iPhone/iPod Touch.

I would never waste my money on that.
G 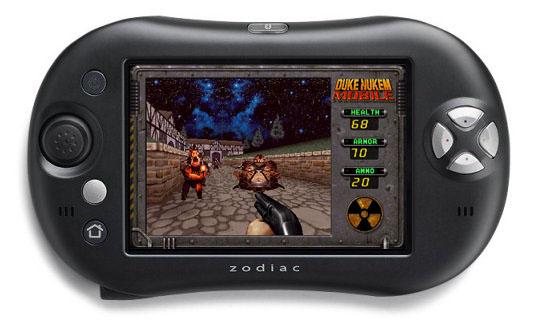 I would never waste my money on that.
Click to expand...

I think the idea of playing the hundreds of NES/SNES ROMS is enough for me to buy it.

Hell I'd pay for this thing to be able to have real controls for Super Mario, etc. Long train/plane rides would be easier. Saves you from having to buy a full fledged portable gaming device and all the discs and crap that go with it.

Anyone who tried the NES ROM emulator with jailbreak knows how crappy it is when you don't have real buttons.
R

so I have this cool iphone with an accelerometer, touch screen controls, and other bells and whistles then I'd want to take out this nintendo NES looking controller to play some iphone games?

this thing will flop hard, if I saw anyone with one of those I couldn't stop laughing
A

Why the screenshot of cover flow? Do they want us to control cover flow with buttons?
D

Imagine answering your phone with the joystick poking you in the ear...

Gonna call fake or epic fail on this one.
P

Imagine answering your phone with the joystick poking you in the ear...
Click to expand...

Ahaha
That thought just made me laugh out loud.
T

That doesn't mean Apple will support it officially through the iPod connector.

It might just run an adhoc network that the iPhone would have to connect to and they could provide some sort of API for developers to use the controller over wifi.

And there'd be nothing Apple could do about it. Though I dunno why Apple would ever want to block the use of controllers.
K

Though I don't think this item is for me, I do hope that Apple opens up the SDK a bit more so that develoopers can use the dock connector for input devices.
W

Oh, if I could imagine the joy of being juvenile again I might get one.

The General said:
That doesn't mean Apple will support it officially through the iPod connector.
Click to expand...

If it's coming from Belkin, I'd guess it was officially Apple supported.

I don't play games and wouldn't buy it probably, but it has its uses. It doesn't mean that because you took away the buttons with a touchscreen that you can't have a specific add on for a certain purpose. ACTUALLY ONE OF THE PURPOSES OF TAKING BUTTONS AWAY MIGHT BE TO BE ABLE TO ADD ANY CUSTOM CONFIGURATION ACCORDING TO THE USE THAT ONE WISHES? HUH? HOW ABOUT THAT? ANY OF YOU NEGATIVE GENIUSES THOUGH OF THAT FLEXIBILITY? Say you take away the keyboard but can add a specific keyboard for programers, a special pad for designers, etc. etc.

And it beats having the f. solver as the no. 1 rumor of the moment, and if the whole mac community were hanging by the balls of some developer "aknowledging" us and delivering the solver.
C

IF Apple were to support something like this -- and that's a sizable IF -- then it is likely that support would be generic in nature, using some form of standardized (by Apple) controller communication protocol, meaning many companies could make them.

However, I think Apple may want to hold off on something like this for a little while yet, as, while advanced controls like that may be needed for some more advanced games, game developers need to adapt to writing touchscreen based applications first. If developers are given something like this to play with, chances are they'll use it too much as a crutch and won't innovate.
J

arn said:
If it's coming from Belkin, I'd guess it was officially Apple supported.

Hey arn, is that because of the ties of the two cos are so close? I didn't know that, they have special status.

jackfrost123 said:
Hey arn, it that because of the ties of the two cos are so close? I didn't no that, they have special status.
Click to expand...

It's just based on the fact that Belkin is a very large accessory manufacturer, and they do freqently work with Apple on accessories. It just seems unlikely that Belkin would waste resources on an "unofficial" accessory with niche support. In that if Belkin is going on their own on this, they would have to recruit developers themselves to modify their apps to support this accessory specifically.

(this, of course, is under the assumption that this rumor/image is true, which has not been confirmed)

Pretty cool. I wouldn't want to see games depend on it, since I'm really liking the small size without it. But as an option to enhance certain games that can also get by without, why not?

Love it. The iPhone is a great platform, with awesome 3rd party support and not ALL games are meant to be controlled with the accelerometer + touch. "Onscreen touch controls" are weak as hell. Even a big number of Nintendo first party games don't use the waggle Wii-mote.

If this opens more doors for devs, I say bring it on.

I'd be surprised if Jobs would officially support something that ugly. Seriously. And you know Teh Steve has final decision on everything related to iPhone. Then again, there was the Motorola ROKR...

I do think Apple would be wise to build in maybe 4 edge or corner buttons on the iPhone, which would be programmable and not have a fixed use. They could be low profile and stay out of the way when not needed but apps would be able to use them if they wanted to. Only thing is that screws up all the cases.

I quite like the idea of this, and it does look very cool imo. Maybe thats just because I play games a lot, but oh well

One thing I really hope that they do not go down is having apps that 'require' a certain accessory to work. That to me would really start cluttering up the app store and have stupid compatability issues. Please just make it optional to use this on some apps.

iControlPad is possibly the worst product name that I've ever come across.
T

I would never waste my money on that.
Click to expand...

The point is to expand upon the current functionality of the iPhone for a particular area, in this case games, for those that want it. i.e. mobile gamers.

This doesn't force you to use it all the time or even force you to buy it continue to play games. The everyday computer can play a console-esque game or flight simulator with the mouse and keyboard only but adding a mash-pad and joystick and pedals adds so much more to the game. For those people only using the computer for non gaming activities, the mouse and keyboard are fine. Those wanting a little more can get it.
You must log in or register to reply here.
Share:
Facebook Twitter Reddit Email Link
Register on MacRumors! This sidebar will go away, and you'll see fewer ads.
Sign Up
Top Bottom