I'm in the market for the best desktop laptop stand for my 15" Macbook Pro. I don't want to spend more than $70.

The 3 I've found are Griffin's Elevator, Logitech Alto, APC Ergonomic Notebook Stand with 4-Port USB 2.0 Hub, and Mstand? Any recommendations/reviews on those and others?

I will be using an external keyboard and mouse. Thanks.
F

I dont have any experience with these stands but judging by the picture the APC one wil not let je acces the powerbuttom nor de drive, so i would think that one is out of the question. I've been looking for a nice stand for when my mbp arrives but i think im going to go for the Mstand, because it looks good and looks sturdy. The price is also good i think.
The Mstand wil not let you acces your power buttom, but hey... how often your going to use your powerbuttom. You drive on the other hand.
Comment

One was an X shape with USB ports and it looked awesome!
Comment
M

here's a link to some info about those new logictech stands "stetwin" was refering to. i don't think they've been released yet.

a word of warning on the mstand..... i saw a pic in the "post your set ups" forum that showed the cable management hole in the back was too small to feed a dvi connector through!! so if your buying it for that "cable management" feature,don't!
Comment

MAW said:
here's a link to some info about those new logictech stands "stetwin" was refering to. i don't think they've been released yet.
Click to expand...

I've had the Griffin Elevator for a week or a week and a half and love it. I liked the look of the mstand but since it didn't have the arms like the griffin does it didn't seem like it would allow more air circulation, which is (or should be) a benefit to having a stand. It does allow you access to the power button... maybe fad meant the button to open the lid?? Or meant another stand? I read that the mstand's little lip at the bottom doesnt get in the way of the superdrive or the whatchamacallit that detects the remote, but it does cover the button to open the computer so you'd have to slide it back or lift it up to open it.... or not close it.

I really like the griffin elevator. I actually got it new off ebay for $30 shipped so it definitely fit my budget. Plus it matches the computer perfectly and does it's job with a minimum of material. It lifts the screen up to a perfect height. One thing I have noticed is it's a little shakey. When I touch the computer it seems to wobble just a bit. Also, it comes disassembled, and while it's not hard to put together, it's not a super secure connection, the two stand pieces slide into the clear attaching piece but they don't have any way of fully sticking in there so when I move the stand I have to grab it from the bottom clear piece and be careful not to let the arms come out.
Comment
F

Whoops, i did mean the button to open the lid sorry bout that
Comment
D

Grab one of these I have been using them for a couple years got on with 2 fans and one with 3. cheap and works great
Comment
S

one of these what? i think you forgot the linky
Comment
D

It doesn't seem to raise it high enough, unless it is height adjustable?
Comment
D

er.. you dont need a foot of space from the desk to the laptop all is needed is rear elivation to get the fans in and to draw in cool air. Any extra depth will not prove to be much more helpfull.
Comment
C

iLap, anyone? it's advertised as a dual desktop / lap device. it looked good in pictures, as a desktop stand.
Comment
E

I have the iLap and LOVE it

What's cool is that it has a removeable pad on the front so you can have it on to use on your lap, then take it off and it sits nicely on your desk.

With cushion on the lap: 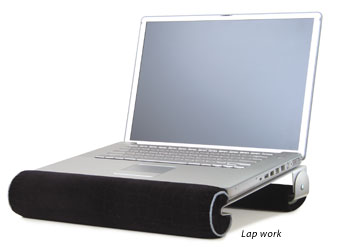 Without the cushion, on your desk: 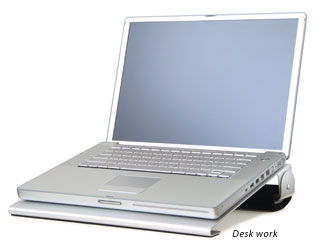 It has a "teardrop" cutout on the bottom to help dissapate heat.

Highly recommended. I got it for about $60 a few months back.

L3X said:
I'll def. be getting one of those iLaps. Thanks for the post.
Click to expand...

No problem. Happy to help.

Wow, the effect of the blue under lighting when the room lights are dark is pretty damn cool. Built in fans is nice too. However the height thing, yeah it only needs to be slightly lifted for air circulation, but if you want a stand so the screen is at a better viewing height neck wise (not having to always look down) you'd want a higher stand. My griffin says it raises 5.5" and it's at a MUCH better height. I can look straight forward at it, no more looking down.
Comment

Zero complaints about that thing, seriously.
Click to expand...

do you use an external keyboard with the ilap or just type on the laptop?
Comment
E

icafe said:
do you use an external keyboard with the ilap or just type on the laptop?
Click to expand...

I just type straight on the laptop. The angle actually helps with that quite a bit too. Feels a little more "natural" than it did before. Totally user preference, but I dig it
Comment
A

diadem said:
er.. you dont need a foot of space from the desk to the laptop all is needed is rear elivation to get the fans in and to draw in cool air. Any extra depth will not prove to be much more helpfull.
Click to expand...

err. I mean for height, not for the fans, so it is level with monitors and so you don't damage your neck.
Comment
A

If you're going to use an external keyboard and mouse, the mStand is a great option. I have one and love it.

It is high enough for that it sits next to a TFT and a CRT and its at the same hight as them. I would try it befor spending lots of cash for somthing you can get for next to nothing or even make your self.
I'll take a pic when i get home to show you.
Comment

Whatever you get, make sure it raised the macbook off of the desk at least 6 inches. I have a Podium Coolpad and with the small angle that the Macbook Pros' screen opens, it makes it impossible to get a good viewable angle.
Comment
S

I have one and with an external keyboard + tablet it works great!
Of course, I have to lift my powerbook up in order to insert & eject a disc.

I'm inches from hitting the button to buy the mStand, I just have one question for those who have it. The rubber they use, does it leave marks on your MBP? I know its there for grip and to prevent scratches, but does it leave a residue? How about in intensive apps when the MBP heats up pretty hot...is the rubber reliable.

I'd like to keep my laptop emaculate for as long as possible, I just don't want permanent markings of where it sat on the rubber pads.