Last month, BlackBerry announced that it would be bringing its BlackBerry Messenger (BBM) service to iOS and Android this summer, seeking to strengthen its existing network of 60 million monthly active users with a broader cross-platform messaging solution.

SlashGear now points to a Tweet from T-Mobile UK claiming that BBM will be launching on iOS and Android on June 27.

Great news - BlackBerry Messenger will be available to download on iOS and Android from June 27th! #BBM
Click to expand... 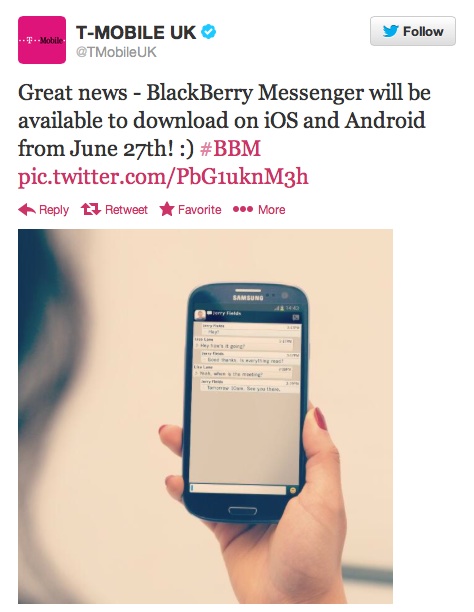 In an interview with CNET yesterday, BlackBerry Chief Operating Officer Kristian Tear also revealed that the company is in talks with other handset makers to offer BBM preloaded on their devices. Apple obviously would not agree to such a deal, but it seems that certain Android handsets may soon come with built-in support for the service.

BlackBerry is working with other handset manufacturers to get its BlackBerry Messenger service preloaded on to their phones, according to a top executive.

"There is interest from other handset makers," BlackBerry Chief Operating Officer Kristian Tear told CNET in an interview on Wednesday.
Click to expand...

BBM's expansion comes as Apple has gained traction with its Apple-centric iMessage service and other cross-platform services such as WhatsApp and Facebook Messenger have accumulated significant user bases of their own. BlackBerry has clearly decided that the potential benefits of opening up BBM to more users outweigh the risks of BlackBerry device customers defecting to other platforms, but it remains to be seen whether the smartphone pioneer can help stabilize itself with such a move alongside its new BlackBerry 10 operating system.

Update 8:46 AM: Business Insider reports that the June 27 date is incorrect, with a source calling the claim "bogus".

Update 11:25 AM: BlackBerry has confirmed to Mashable that the June 27 date tweeted by T-Mobile UK is incorrect.

Not sure why this matters..
S

Too little too late.
S

Never really used it even when I had a blackberry.

Thank god for BlackBerry Messenger.
U

Completely obsolete. I don't know why they've even bothered.

Keep it in the app store for those that want it. I for one won't be using it.
T

Mums said:
Not sure why this matters..
Click to expand...

because it is 10x more reliable than iMessage, it actually works
H

everybody I know who had a blackberry now has an iPhone.

the ones that still do use whatsapp.

Whatsapp has got it covered.
T

Tiger8 said:
because it is 10x more reliable than iMessage, it actually works
Click to expand...

Mums said:
Not sure why this matters..
Click to expand...

Its a big deal for both Apple, Blackberry and anybody who uses the service or wants to use it from an iPhone (a lot of people). As the article says, more than 60 million communicate through their messaging system.

Half the time I send an iMessage, it ends up being sent as a text. It's hardly reliable.

Happy with iMessage, and Whatsapp, and Hangouts.

iMessage has been rock solid for me and my buddies (a chunk of whom switched from Blackberries). Regardless of attachments sent. Being able to reply to messages from my computer is also a massive bonus.

BBM needed to be out before iMessage launched. You snooze you lose.
Last edited: Jun 6, 2013
C

Tiger8 said:
because it is 10x more reliable than iMessage, it actually works
Click to expand...

It's easy to be reliable when you only have 25 devices using it.
Z

BBM is a highly reliable, highly secure, fully featured messaging system. I agree that they should have done this sooner but the fact remains we will soon have access to another excellent option for messaging.

I'll be downloading it.

at least it's free

meh ... but apple needs to bring iMessage to android. im so annoyed having to reply via whatsapp all the time while im on my mac
T

codyc815 said:
It's easy to be reliable when you only have 25 devices using it.
Click to expand...

Try 60 million, still one of the most popular platforms internationally.

According to whom?
A

I have no one I would speak too on BBM

I would allow no one with a BB to BBM me