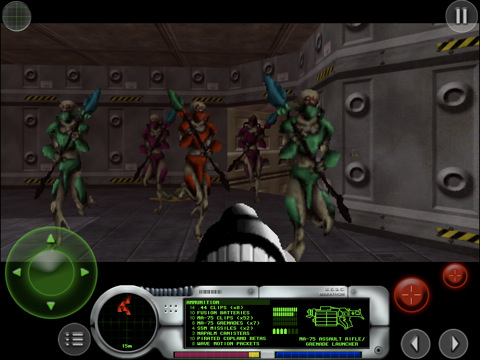 Bungie's classic first person shooter Marathon [iTunes] is now on the App Store for the iPad. The free download offers 27 levels divided into 6 chapters. The interface has been modified to accommodate touch screen interaction of the iPad.

Marathon was first released by Bungie Software for the Macintosh in 1994. It was a Mac exclusive launch and was released shortly after Doom was first released for the PC. Bungie later went on to be acquired by Microsoft and released the popular Halo game series for the Xbox.

The iPad version of the game started off as a personal project by iOS developer Daniel Blezek but was later officially sanctioned by Bungie. The iPad version of the game is free to download, but an in game store offers two in-app purchase options. The first is called "HD Mode" for $3.99 and features new high resolution textures to replace the walls, floors and liquids. The second is Master Chief Mode for $0.99 which offers the ability to start on any level, infinite ammo, all weapons, instant recharge, invulnerability and instant save.

Wow sparks some memories of the old Mac lab at school. one of the teachers had this game. I remember being amazed at the graphics. Now decades later I sit here on my iPhone that has much more than quadruple the capability of the 90s Macs.
D

Completing the entire game on Total Carnage was my ultimate gaming achievement! I was so excited to play on a PowerMac 6100/60 because it allowed me upgrade my graphics settings and view floor patterns.

The last level of M1 was indeed the hardest level in the whole trilogy on total carnage. And after surviving all the rings there were the lava passages, so annoying! Only thing that topped it was just the final room of M2's last level if you actually wanted to clear it - I never managed to without being blown up by the juggernaut's death. But you didn't have to clear it so Ingue Ferroque wins still.

Anyway ... getting close to an excuse to get an iPad now, what with the Small World boardgame and now this being iPad only ><.

YES! And "Master Chief" mode is *exactly* what I was hoping for!

Everything old is new again! You can get Spectre VR and Myst.
B

Ha! I designed that interface for M1A1... glad to see it's still getting some good use!

Grab it, folks. It's free and was a landmark game. Totally worth having.
M

woot woot!!
man its been years since Ive played this game
D

Baron58 said:
Everything old is new again! You can get Spectre VR and Myst.
Click to expand...

You've just absolutely obliterated my productivity for the night. I used to spend so much time on Spectre on my dad's Performa. Great game.

Never got into Myst, but for $5 I feel like I need to see what I missed out on as a kid.

Marathon's a classic, but I'm still waiting for the day Halo is ported
C

longofest said:
Master Chief mode is a misnomer unless you get to become a Spartan II
Click to expand...

And I thought Microsoft owned all the rights to the Halo universe so they can't be happy that Bungie is using this on an iOS title. Of course, Master Chief is a generic rank so I doubt Microsoft has the trademark on it, but it's still very obvious what association Bungie is trying to draw by using that term.

commander.data said:
Of course, Master Chief is a generic rank so I doubt Microsoft has the trademark on it, but it's still very obvious what association Bungie is trying to draw by using that term.
Click to expand...

I enjoy these games, butni always forget when I'm away from them for a while that they, for whatever reason, start to make me sick to my stomach after a while. Something about visual cues saying I'm moving while inner ear says I'm standing still, I think...

Not exactly. They have it registered for use with an action figure, not for video game terminology...
Last edited by a moderator: Jul 10, 2011

Aww That's the only way we used to play Marathon, over the LAN at work. There's something oddly therapeutic about blowing your boss's head off with a rocket launcher.
P

Prodo123 said:
Marathon's a classic, but I'm still waiting for the day Halo is ported
Click to expand...

I thought I read something about Halo getting a remake. What's weird is that the original Halo for Mac is incredibly expensive... like over $100 even though it's used!

I'm thinking that Halo on the iPad would do well. A relaunch of Halo on the Mac App Store might be good idea too.

As for Marathon... ha... I used to make maps for this game. I don't have an iPad though.

Also, in the screenshot, it says © 1994... so I think the game is older than 1995. I should know, I played this game for three years in college. I liked the voice chat... and the rocket launcher

Grab it, folks. It's free and was a landmark game. Totally worth having.
Click to expand...

Awesome! I've been waiting for this. Now they need Pathways Into Darkness to complete my old Mac gaming addictions. Although having some old classics like Scarab of Ra and Solarian II would be awesome.

kalsta said:
Aww That's the only way we used to play Marathon, over the LAN at work. There's something oddly therapeutic about blowing your boss's head off with a rocket launcher.
Click to expand...

Which is why we need Unreal Tournament for iPad!