While quite a few low-cost cases based on the alleged design of the fifth-generation iPad have been circulating for a number of months, bigger names are now getting into the act. The news comes from CNET, which reports that Gumdrop Cases has developed its own $35-$65 cases and is in fact betting that the new iPad will make an appearance at next week's Worldwide Developers Conference (WWDC).

[Gumdrop Cases founder and CEO Tim] Hickman wouldn't say who his sources are, but he's confident enough in them to start producing new cases for the iPad 5 and put them up for pre-order. In fact, a press sample of the $59.99 Gumdrop Drop Tech is due to arrive later today, and we'll update the post with new pictures once we get it. Gumdrop is also manufacturing the Gumdrop Bounce ($34.95) and Gumdrop Drop Tech Designer Series ($59.99). They're scheduled to ship on June 10.
Click to expand... 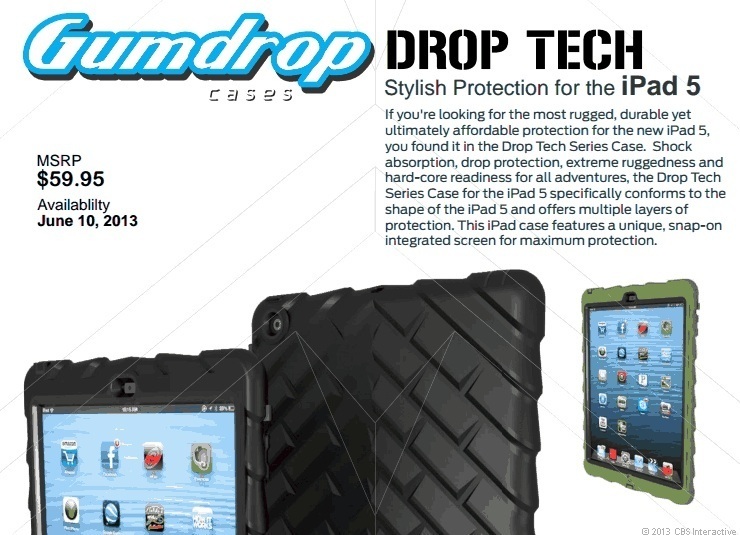 The fifth-generation iPad is widely rumored to be taking design cues from the iPad mini, adopting narrower side bezels while coming in roughly 15% thinner and up to 33% lighter that the current full-size iPad.

The vast majority of reports have, however, indicated that the new iPad will not be appearing at WWDC, with Apple instead said to be launching updated iOS hardware later in the year. Relatively reliable KGI Securities analyst Ming-Chi Kuo has claimed that Apple will begin ramping up production of the new full-size iPad in the August-September timeframe, with an updated iPad mini with Retina display perhaps coming several months later. Digitimes has offered similar estimates of launch timing for the new iPads.

Case makers have traditionally had a fair amount of success basing their designs on leaked measurements for new and redesigned Apple devices, although many were fooled by rampant rumors of a tapered iPhone design that failed to appear when Apple launched the iPhone 4S in 2011.

They must know something we don't know.

Well, Mr. Hickman is going to lose money just like the case makers who bet on tapered cases for the iPhone 4S.
2

ValSalva said:
Well, Mr. Hickman is going to lose money just like the case makers who bet on tapered cases for the iPhone 4S.
Click to expand...

Another Genius move to make sure Gumdrop gets a free dose of advertising right before a big event. I truly doubt he cares if an iPad comes out or not. Look at all this free marketing
G

The title says unlikely launch yet the case makers do fancy a launch next week bit confusing?

I hope these rumour sites are wrong and the Ipad 5 makes a surprise announcement.
S

I suppose they could reuse/render the rubber and plastic if their cases are the wring dimensions.

The word stylish doesn't come to mind when I see this. But that's a matter of taste.

Besides parents with young children likely to throw these, who else would honestly buy one of these thick cases?

The cases are so cheap to make, like pennies, and they sell them for $20+, that they can afford to be wrong once in a while in the hopes of being right sometimes.

What a hideous case.

with about 19 iPad updates coming in the next few years, it'll fit something eventually!

sshambles said:
Besides parents with young children likely to throw these, who else would honestly buy one of these thick cases?
Click to expand...

It depends on your use case.

If you have small children, and you leave your iPad on the coffee table and never leave home with it, yes - this is a good case.

If you travel everywhere with your iPad, like me, I want the case to be as thin and light as possible.

So, this case is NOT for me. But I can see people that could use it.

sshambles said:
Besides parents with young children likely to throw these, who else would honestly buy one of these thick cases?
Click to expand...

I just can't wait for them to describe the dimensions in terms of "inches thin" and so many "pounds light".

It looks like a big Jeep tire... Disgusting!
H

Who's Gumdrop? Now you know.

I think it's a pretty slick marketing move. I've never heard of Gumdrop, now many have. So the cases they make don't fit...oh well, they'll adjust, fix or melt em down and enjoy the free marketing buzz.

fullstop102 said:
I just can't wait for them to describe the dimensions in terms of "inches thin" and so many "pounds light".

Apple already do this with the Macs. They are X mm thin. And X pounds/KG light. Only time before this translates to the iOS devices.
P

the8thark said:
Apple already do this with the Macs. They are X mm thin. And X pounds/KG light. Only time before this translates to the iOS devices.
Click to expand...