With its launch on Apple Music, users can now tune into the channel on iPhone, iPad, iPod touch, Apple TV, Mac, PC, Android, and Sonos speakers. CBS Sports Radio is already being highlighted under the Featured Stations section of the Radio tab in Apple Music. 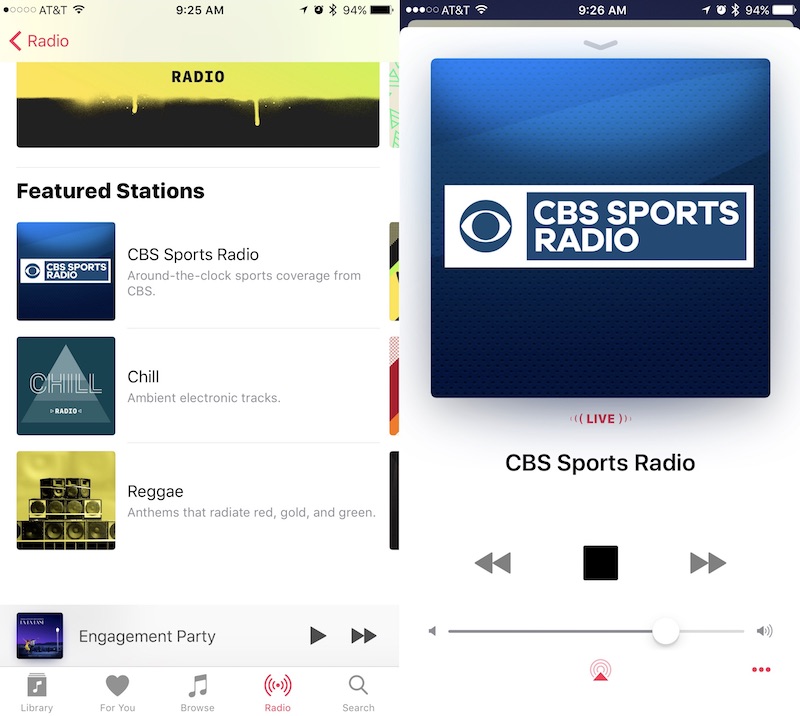 "The appetite for compelling and hard-to-ignore sports analysis, commentary and fan debate continues to grow across all audio platforms," said Chris Oliviero, Executive Vice President, Programming, CBS RADIO. "CBS Sports Radio delivers this to fans 24 hours a day, 7 days a week so it's an ideal next step to launch a channel on Apple Music, one of the most popular streaming services today, as yet another way we continue to meet the evolving desires of this passionate audience anywhere and everywhere."
Click to expand...

CBS launched the sports-centric radio station four years ago this month, with national coverage of the latest in sports news, commentaries on the latest games, and interviews with athletes, all "hosted by leading sports figures." The company updates its fans with a schedule on its Twitter account, but the consistent weekday lineup includes:

[*]6:00-9:00 AM: Gio and Jones (featuring Gregg Giannotti and Brian Jones)
[*]9:00 AM-12:00 Noon: Tiki and Tierney (featuring Tiki Barber and Brandon Tierney)
[*]12:00 Noon-3:00 PM: The Jim Rome Show
[*]3:00-6:00 PM: The Doug Gottlieb Show
[*]6:00-10:00 PM: The DA Show (featuring Damon Amendolara)
[*]10:00 PM-2:00 AM: Ferrall on the Bench (featuring Scott Ferrall)
[*]2:00-6:00 AM: After Hours with Amy Lawrence
The Radio section of Apple Music has seen a few updates throughout last year, ranging from the addition of new stations like Bloomberg Radio, to a dynamic Beats 1 banner, as well as updated artwork for the stock stations. Beats 1 radio host Zane Lowe has also been in the spotlight as a representative of Apple Music, including the announcement that he will be a keynote speaker at SXSW this March.

Fox Sports Radio is the lone hold out now. I know many people couldn't care less, but having most of what I listen to condensed in one app is nice.
Comment

txpilot82 said:
Fox Sports Radio is the lone hold out now. I know many people couldn't care less, but having most of what I listen to condensed in one app is nice.
Click to expand...

I'd love to see this too, but Fox is fully entrenched on the iHeartMedia bandwagon.
Reactions: txpilot82
Comment