While Apple doesn't participate at CES and has ended its involvement in trade shows in general, the company naturally continues to keep tabs on what its competition is up to and CES is a prime event for new product introductions. paidContent has in fact proven Apple's interest in CES by chance, running into iOS device marketing chief Greg Joswiak on the floor at the expo.

While wandering around the Central Hall of the Las Vegas Convention Center Tuesday, I bumped into Greg Joswiak, head of iOS product marketing for Apple, just outside of Sony's booth. Joz, as he's known within the Apple community, grinned sheepishly upon being recognized by a reporter and stopped to chat for a few minutes.

Joswiak said he was interested in how other companies present their products at events such as CES, from things like booth layout and aesthetics to which products are highlighted within a company's booth.
Click to expand...

Joswiak declined to enter a more in-depth discussion of his interests at the show, with paidContent noting only that he "seemed less than impressed" with Sony's booth on the expo floor. 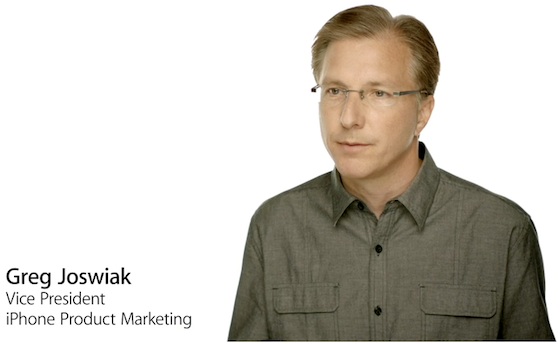 Apple is of course interested in what its competitors are doing, but is likely also interested in following what companies are coming up with in terms of accessories for Apple's own products. Despite Apple's lack of official presence at the show, it remains a popular venue for announcements for products of all types, including those within the Mac- and iOS-related markets.

Joswiak has appeared at several Apple keynote and media events, and has frequently played featured roles in Apple's promotional videos for the company's various iOS devices.

Update: A source has informed Reuters that Apple has over 250 employees registered for CES.

Apple Inc, famous for giving CES the cold shoulder year after year, will field a larger presence at the world's largest trade show than many observers imagine.

More than 250 employees are registered to attend the Consumer Electronics Show in Las Vegas, according to a person familiar with Apple's plans.
Click to expand...

How random that someone recognized him.

Perhaps just maybe he was looking to buy something for his iDevice?
S

Elvis was also spotted in the food court by another reporter shortly before he left the building.

It would be amazing if Apple didn't have a whole bunch of people at CES (and other similar expos.) Apple may be a very closed world - but they don't live in a vacuum. I guess what makes this newsworthy is the fact that he is such a high level exec.

Of course Apple is keeping up with what other producers are doing.
H

Apple out to steal the competition's ideas again I see. Oh Apple. Give up.

Is this news? DUHHH Apple does its research on what its friends and competitors are putting out.

hoing said:
Apple out to steal the competition's ideas again I see. Oh Apple. Give up.
Click to expand...

Then they must not have been very good at copying.. Their phones are still stuck with small, non-HD screens! And the naming conventions too! Instead of dull and boring name like iPhone, they need something like iPhone LTE HD Extreme Ultimate Edition!


GeekLawyer said:
How random that someone recognized him.
Click to expand...

Why? The place is crawling with tech 'reporters' and he's a well-known apple executive.
B

C00rDiNaT0r said:
Then they must not have been very good at copying.. Their phones are still stuck with small, non-HD screens! And the naming conventions too! Instead of dull and boring name like iPhone, they need something like iPhone LTE HD Extreme Ultimate Edition!
Click to expand...

Because miniaturization was never a thing before the Macbook Air.
B

To expand on what you were saying ... ultra-thin / thin-and-light laptops with CULV processors already existed before the Macbook Air's (see Asus). All Apple should really get credit for is making SSD's standard for these kinds of laptops.

Apple made ultrathin laptops and tablets mainstream. Doesn't matter if company X and Y had models that sold like complete **** and didn't make a blip on anyones radar. Apple pushes the envelope, then popularizes new paradigms by incorporating new technologies into products that people actually want to buy. There's still nothing that competes with the quality of the MBA at that pricepoint.

Stella said:
It doesn't matter if they didn't sell well, 11" laptops existed before the Air. Apple didn't invent the 'small' laptop but had the first successful model.
Click to expand...

Did Apple say they were the first to release an 11" laptop?

Josiak, the perfect mix of Steve and Woz

Michael Scrip said:
Did Apple say they were the first to release an 11" laptop?

Sorry - misread the post I was replying to - small screen
I

I'm sure there are several Apple legal department employees at CES, and they are probably near exhaustion simply from typing all the names of companies and products that are ripping off Apple. It might be easier to snap photos of the offending products on their iPhones, but they'd quickly fill up 64GB. And the show has barely started...
W

Duh, it's an industry trade show. Just because Apple doesn't have a booth doesn't mean they wouldn't attend and have scheduled meetings/dinners with partners.

badtzwang said:
[...] All Apple should really get credit for is making SSD's standard for these kinds of laptops.
Click to expand...