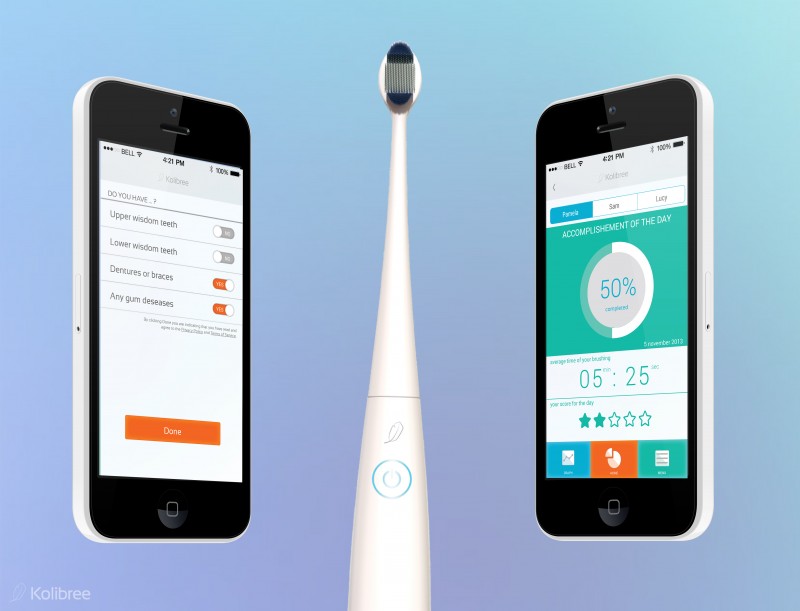 Kolibree has introduced the world's first connected electric toothbrush at CES this year, designed to track brushing habits and encourage better dental care. Kolibree analyzes brushing habits and then displays them on a mobile dashboard, which can be accessed via an iOS app.

The Kolibree uses Bluetooth to connect to an iPhone, automatically synchronizing data each time the toothbrush is used. A built-in sensor measures the amount of time that a user spends brushing and whether hard to reach areas were properly cleaned.

The toothbrush itself features switchable heads, allowing multiple users to use one toothbrush base, but the company suggests that sharing could complicate the data gathering process and recommends an individual brush for each person. The Kolibree toothbrush has vibration speeds and brushing patterns ranging from 4000 to 12500 RPM, and the battery lasts for approximately one week before needing to be recharged.

Kolibree's app works with up to five different brushes in order to make family management of dental hygiene a simpler task. Kids and adults who need motivation to brush can earn badges and track their brushing progress via a graph.

While Kolibree does not proclaim to solve periodontal disease or suggest that it can keep cavities or gingivitis at bay, the better you take care of your teeth, the more likely it is that you can and will avoid serious problems. Before Kolibree, the issue is that there has been no easy and quick way to monitor whether you're doing an A+ job or a C- one when you brush, so how can you improve on a habit you don't have any data about? Kolibree solves that problem.
Click to expand...

Kolibree plans to launch a Kickstarter in the summer to accept pre-orders for the device, which will range in price from $99 to $200. The product is expected to ship during the third quarter of 2014. 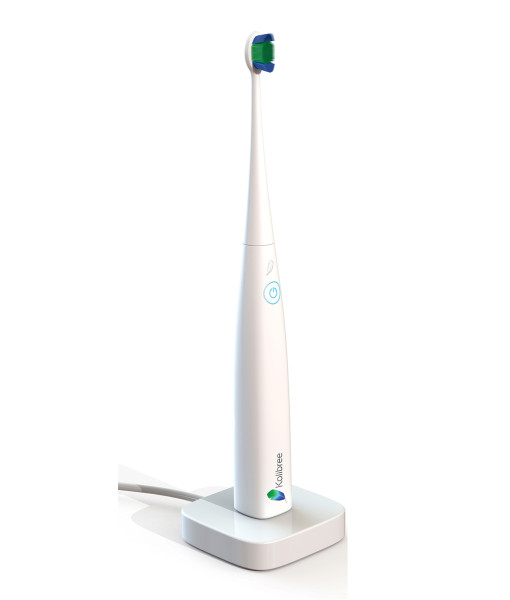 Is this a joke? 200 for a tracking toothbrush? Lol
L

RiddlaBronc said:
Is this a joke? 200 for a tracking toothbrush? Lol
Click to expand...

D'yknow, I regularly look at my Toothbrush and think 'This needs to be smarter'


But seriously? You can pay £100 for a decent electric toothbrush over here, $200 doesn't seem TOO bad, but yeah it's not for me

This is truly and staggeringly stupid.

I you can't keep track of brushing your own teeth, you have much bigger problems than some silly app can address.

However I'm sure that it will sell as there is one born every minute...

I don't wish to be nagged by any appliance, especially a toothbrush or floss dispensers (though of course those would be more useful).
C

In the future, I can see this being a great motivation for kids when it costs $20 or less and the "gamifying" aspects of it are heightened:
"Your brushing has earned you 500 tooth fairy bucks. Upgrade your tooth fairy castle!" Etc.

I think its a great idea and making toothbrushes smarter is a very logical progression of technology imo.

Devices and apps to measure personal activity, weight, etc are common place and numerous these days .... why not one to help with dental hygiene?

My electric toothbrush already has a warning light for when I am brushing too hard and a mechanism for telling me when I have brushed for two minutes, recording and collating this information into a smartphone app is a pretty logical next step imo.

I have just done a quick search and found there are already iPhone apps out there to help with timing your brushing etc so connecting the two seems even more obvious.

I think it will be hard for a start-up to grab a share of this market though, Oral B or one of the other big names in oral hygiene will no doubt bring out a connected brush at some point in the future and it will be very hard for a new company to compete against an established brand in this area.

Oral B even have a connected toothbrush already, surely wouldn't be hard to write an app for it. > http://www.amazon.co.uk/Braun-Oral-B-Triumph-Rechargeable-Toothbrush/dp/B0029Z9XQ6

Man this is so last year. I am currently developing Bluetooth lavatory paper with full iOS integration. You'll be able to track not only frequency and estimated mass of evacuation but colour and texture, including nuttiness. Later versions will have an olfactory sensor as well as parasite detection and identification. Much of this is based on none our previous products such as the SCSI enabled handkerchief.
M

I'll stick with my Sonicare. I don't need my brush to tell me whether I've been taking care of my teeth. If you can't figure that out on your own, then God help you. Likewise, if you can't tell whether you're doing a good job on hard-to-reach areas, you need to pay a little more attention . Instead of just waving your hand around in your mouth like a lunatic, actually PAY ATTENTION. I know, such a difficult problem

If I'm going to pay a lot for a fancy toothbrush, that toothbrush better put all energy into actually cleaning better, not gimmicks for making it more interactive. The cleaning capabilities of a good Sonicare are unmatched in my opinion. Everything from the design of the brush heads, to the motion of the brush head, etc are all more important than having the toothbrush tell you you're not doing a good job.
Last edited: Jan 6, 2014
P

It sounds like a joke but give it a generation and everything is going to be expected to have wireless data connectivity with status alerts and progress tracking.

Kolobree is clearly trying way too hard.
U

Another product to dumb down our future generation. Woo!

Remember back in the day before cell phones were common place, we figured out how to get around. Now people forget their phone and panic like they are missing something. Absolutely crazy.
2

My wife owns one of these -

I see this as an improvement on what my wife has, so I have no issues. However, I will continue to use my 2 dollar toothbrunch. I am very techy everywhere but the bathroom (no NSA spying devices in there thank you )
U

I'm still waiting for someone to invent a device that takes my frozen dinner out of the freezer and microwaves it for me.

The microwave can use the QR code to scan for how long to cook it for.

If you need to be reminded in order to brush your teeth, you have bad habits and this won't help a bit...
E

seeing this, am considering on creating an app that track and analyze your poo habits

a smart connected toilet seat !!!! with an electric buzzer for who don't aim right ! LMFAO

elchemor said:
seeing this, am considering on creating an app that track and analyze your poo habits

a smart connected toilet seat !!!! with an electric buzzer for who don't aim right ! LMFAO
Click to expand...

or just send electricity through the stream... In fact, no need for an app, just an electrified toilet and aiming should be fixed after 1-3 pees...

This product just gave me cancer.

If you're fanatical enough about dental care to spend $200 then you're probably doing an A+ job already.

First "check-in" type post from one of these I see on social media and I'm immediately blocking it. "Jimmy just earned the Minty Fresh Mealtime badge for brushing after every meal!"

You can almost hear the "you've gotta be kidding me" in the ad's voiceover.

Cougarcat said:
In the future, I can see this being a great motivation for kids when it costs $20 or less and the "gamifying" aspects of it are heightened:
"Your brushing has earned you 500 tooth fairy bucks. Upgrade your tooth fairy castle!" Etc.

I agree - dentists try to gamify brushing now for kids, but if they only see the dentist twice a year, they forget about the game.

I can't wait until the smart tooth brush starts uploading the data to the cloud. Then Google can serve me ads from my dentist saying I need to see him more often.

Want to know how to part fools from their gold? Send $200 for my handy little booklet that reveals secrets!
O