China has "shattered" records with the highest iOS revenue quarter reported to date, for any country that has been tracked by app intelligence firm App Annie. In total, the country is now the number one largest market in the world for App Store revenue on Apple's iPhone and iPad devices, with its record-breaking number sitting at $1.7 billion for Q3 2016.

China is now 15 percent ahead of the U.S. in terms of iOS App Store revenue, with the U.S. sitting just below $1.5 billion on the charts. The U.S. had been the number one market in iOS revenue since 2010. 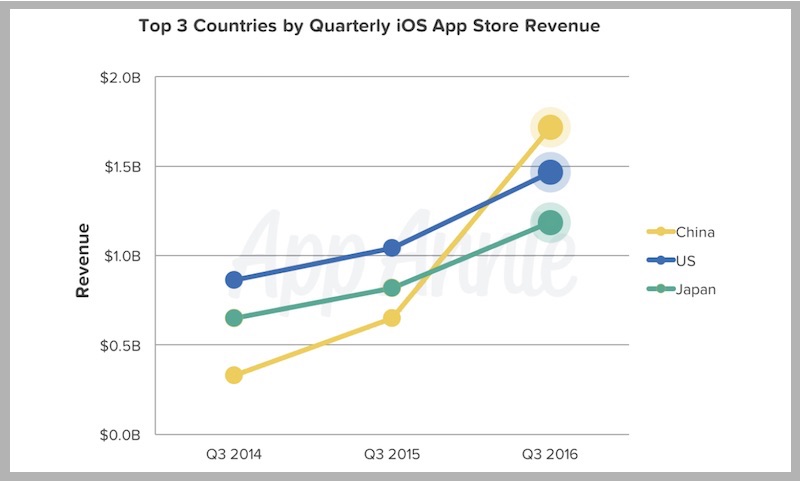 App Annie's report notes that Chinese iOS users spent five times more in applications on iPhone and iPad than they did just two years prior. Much of China's growth is estimated to be on the back of the Games category, a section it also bested the U.S. in during Q2 2016. Much of that is attributed to the worldwide success of Pokémon Go, which is described in the report as achieving "unprecedented global revenue."

Besides gaming, popular categories in the iOS App Store in China are Entertainment, Social Networking, Books, and Photo and Video apps. Each category has seen impressive growth from the year-ago quarter, with Entertainment apps increasing 3.5 times from its Q3 2015 revenue and all of the top categories more than tripling in revenue year over year.

App Annie predicts that iOS revenue for China will continue to grow, and the country will eventually "drive the largest absolute revenue growth for any country by 2020." Elsewhere in Apple's presence in China, the company recently announced plans to build a new R&D center in Shenzhen, with a focus on "strengthening relationships" with local partners and universities across the country.

For anyone wondering why Apple is going "all in" on China, this is one of the reasons.
Reactions: 2457282, Shirasaki, BeefCake 15 and 6 others

Heard there are a few more people in China compared to the US....
Reactions: DrewDaHilp1, kdarling, Oblivious.Robot and 7 others

So perhaps those advancing doom and gloom prospects for Apple in China were too hasty.
Reactions: Good User Name

Apple has done a wonderful job in encouraging Chinese consumers to pay for copyright content and software. The transformation of consumer behavior will benefit the whole software industry, including Microsoft, Adobe, ...
Reactions: sudo1996 and I7guy
T

BerMuc said:
Heard there are a few more people in China compared to the US....
Click to expand...

Every time China's population is mentioned, this is what comes to mind:
Great line that had a dramatic effect on my teenage self.
Reactions: DrewDaHilp1, Borin and TheAppleFairy

Evidence that a locked down environment can even hinder a notorious software pirating country like China!

Won't be the last time we see headlines with similar theme.
Reactions: Keane16 and Agit21

TXCherokee said:
Every time China's population is mentioned, this is what comes to mind:
Great line that had a dramatic effect on my teenage self.
Click to expand...

Maybe China has a lot fewer Pokestops, so they get fewer free pokeballs and need to buy more than you would if you were in the US? Or is Pokemon Go not in China?

Those who watched SNL recently will get the reference.
Reactions: Borin, venusboy and jacob_w
S

First the app store. Next, the world! Build the wall Trump! (Its a joke, relax)
G

Wow. That's pretty cool. So the next time Tim is talking about China a bunch we'll see if he brings this up.

DoooooOOOOmed!
Reactions: Goatllama and Borin
A

Agit21 said:
China will overtake the USA in basically everything category.
Click to expand...

Yes. Every product, every service, every movie, everything. 1.2 billion cannot be wrong.

And it's awesome. A country completely destitute from stupid policies has lifted hundreds of millions from crushing poverty by being more free. It's a beautiful thing.
J

Isn't iTunes still banned? And Cook going all in on China is very risky as China could easily ban the app store too.
Reactions: Benjamin Frost and ArtOfWarfare
T

And this is why China matters, and expect apple to focus its future efforts on china.

BerMuc said:
Heard there are a few more people in China compared to the US....
Click to expand...

Give a MR forum member ten seconds and they'll find the negative. I won the lottery!! But one of the numbers was 13.

I wonder if I can sell my app in the U.S. App Store in the China App Store? I know some Mandarin.
Reactions: obargy

Those suicide nets at Foxconn were a smart investment.

I do not think you can play Pokemon Go in China. (You can't even use Google Map there)
T

jdillings said:
Isn't iTunes still banned? And Cook going all in on China is very risky as China could easily ban the app store too.
Click to expand...

Irony is that is how app devs feel about making iOS apps. It is risky because Apple can deny/ban your app for any reason at any time.
Reactions: sudo1996 and Benjamin Frost
You must log in or register to reply here.
Share:
Facebook Twitter Reddit Email Share Link
Register on MacRumors! This sidebar will go away, and you'll see fewer ads.
Sign Up
Top Bottom