Chrysler, Dodge, and Jeep to Offer CarPlay in Select Vehicles This Year

Fiat Chrysler Automobiles ahead of CES today announced the fourth-generation of its Uconnect infotainment automobile system, which will bring Apple CarPlay support to select cars manufactured by the company in 2016. The Uconnect system uses an 8.4-inch touch screen for users to interface with various Chrysler, Dodge, and Jeep models and control music, navigation, and phone calls. 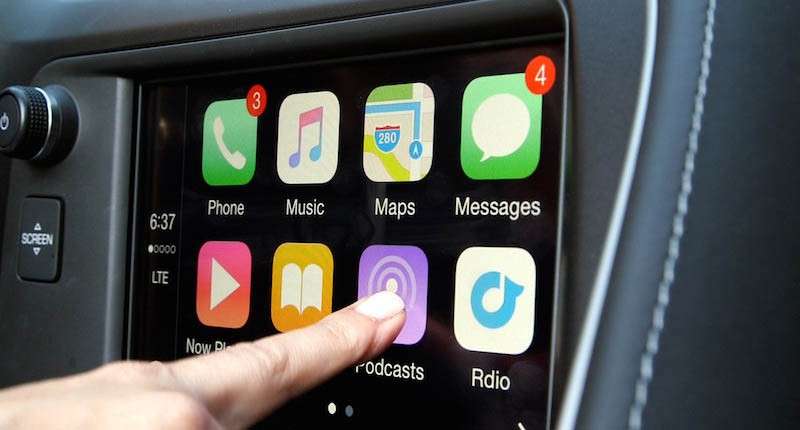 CarPlay will allow FCA customers the ability to sync an iPhone to their vehicle and gain access to their music library, contacts list, navigation settings, and text messages all from the existing Uconnect touch screen. Besides CarPlay support, the 2016 update to UConnect will bring along a capacitive touchscreen, speedier startup times, enhanced processing power, heightened UI response, and better resolution and brightness.

In addition to Apple CarPlay, the fourth-generation UConnect system will support Android Auto for non-iOS users. With today's announcement, FCA joins a host of car manufacturers that are introducing CarPlay support in some of their latest 2016 models, including Chevrolet, Honda, and Ford.

When is Mercedes supposed to support CarPlay? They demoed it almost 2 years ago...
Reactions: appledefenceforce
D

Really wish they would offer a software upgrade for the current gen Uconnect. It's got more than enough oomph to run CarPlay.
Reactions: s1m, edgr.sanchez, DJsteveSD and 5 others

BeSweeet said:
When is Mercedes supposed to support CarPlay? They demoed it almost 2 years ago...
Click to expand...

Public SDK would be nice...

So they aren't going to update my 2014 Grand Cherokee with this? It's more than just a software flash?
Reactions: edgr.sanchez
R

I don't think there is any extra hardware that the current systems don't have. I wish I would get it on my 2014 Ram too. They've added features to the 2015's that the 2014 didn't get even after the released the patch for the hacking vulnerability.
Reactions: MandevilleMike

1Zach1 said:
So they aren't going to update my 2014 Grand Cherokee with this? It's more than just a software flash?
Click to expand...

I'd like to be your customer on one condition: carplay.

Just wondering, how are you sure that it has enough to run CarPlay? Of the actual cars out there with CarPlay right now, they have the practically next gen performance.

Same here. Finding a destination via voice command with UConnect is even worse than Siri if you can believe that.

I'd like to be your customer on one condition: carplay.

Dear Toyota, you lost a $60k sale to Volvo for not revealing any plans to include CarPlay.
Reactions: WigWag Workshop, appledefenceforce, kiopoptr877 and 1 other person
C

fzfpff said:
Public SDK would be nice...
Click to expand...

I agree, I wanted to put together some apps for personal use.

But you will always get those idiots that will sideload apps so they can watch movies while driving.
L

I currently have a Ram 1500 and definitely won't buy another until it has CarPlay already included from the factory, I know that much. You can't trust any of these automakers to promise future updates because 90% of them never deliver on their promise.

That would be great and highly unlikely. I just wonder if that was ever an option how they'd handle all the other non-media controls that the stock head units control? My 2015 Ram runs quite a bit of things i.e. HVAC, seat heaters/vent etc.
E

1Zach1 said:
So they aren't going to update my 2014 Grand Cherokee with this? It's more than just a software flash?
Click to expand...

I just tweeted them to ask them this.

At the very least they should offer a retrofit kit that authorized dealerships could install.

I'd probably spend the money to upgrade my current 2014 Jeep Grand Cherokee Overland. It'd be well worth it given how much I have to use my iPhone when driving since their Uconnect system is a POS in the areas I drive in. Their maps don't reflect changes in DFW since they change the roads every month it seems due to construction. The Uconnect voice control sucks ass compared to Siri. Searching for music on my iPhone using Uconnect is a pita as well and I feel more likely to wreck doing that than using Siri to search for music without touching my phone.
I

Now if FCA actually made vehicles that were reliable and worth buying!

I expect Jeep to have this on the Jeep Unlimited by mid-2017. That's when I'll be getting my next vehicle...will it be a Jeep?
E

crawdad62 said:
That would be great and highly unlikely. I just wonder if that was ever an option how they'd handle all the other non-media controls that the stock head units control? My 2015 Ram runs quite a bit of things i.e. HVAC, seat heaters/vent etc.
Click to expand...

I don't see how this would be an issue.

I could see it being an issue if you want to take out the Uconnect system to install a Pioneer head unit.

But what I'd like to do is simply have my older Uconnect system upgraded to a new model Uconnect. The new models also control HVAC, seat heaters, etc. All it would take is reprogramming them to handle older models.

I posted a few months back on Acura's Facebook page, if you do not have Carplay at my next upgrade, I will not be buying anymore Acura's. Their current navigation system in their Acura Mdx Advance (2014) is a total waste of money. I never used it in the last 1.5 years since I bought this vehicle.
B

My 2012 Chrysler's CD player automatically forces a 2-second gap between tracks on CDs that have no gap between tracks. I listen to a lot of live music so this is completely unacceptable. I called the customer service and the lady told me the CD "had too much data on it"...the hell are these fools talking about?

I'd take CarPlay if I could get rid of Chrysler's absolutely deplorable entertainment center.
Reactions: WigWag Workshop and chrisbb

BeSweeet said:
When is Mercedes supposed to support CarPlay? They demoed it almost 2 years ago...
Click to expand...

Believe it or not, the first cars to support this for MBUSA are going to be the GLA/CLA cars! I work for Mercedes and I am bombarded by these questions. It really irks me that they don't tell anyone information about this stuff. They shot themselves in the foot saying they were on board and we yet to have a car in inventory that can demo this feature!

What I really think is happening...BMW and Mercedes acquired NEXT and they are reluctant to hand over the user-experience to Apple, even though Apple's UI is far superior to what they have proved they could come up with in the past.

I really hope we have some nice things to come and not another way for the Manufacturer to nickel and dime us on "updates" when the phones could be capable of doing that.


Oh, and not to mention their attempt at the "all new touchpad!" If you haven't used that joke of innovation! go check it out. Talk about a distraction while driving! There is no tactile feedback when driving. This is coming from a younger, technical person as well. I really feel for the older customers that buy Mercedes. Keep the cars simple!

I love my older BMW and TDI...they have 3 pedals and don't require a module to do this and another to do that, etc.!

Don't worry, Chrysler will figure out a way to make you pay for it, just like you have to pay for uConnect service to be able to have it read your text messages (and it can't send them since we have iPhones). uConnect service is the most useless piece of trash. The free trial is the only reason I even use it. Once that is over I won't be paying.
Reactions: edgr.sanchez
S

This is where car companies are missing the boat IMHO when it comes to the younger generation. For that matter, even the Boomers would appreciate this tech in the car to work seamlessly!

Mercedes has adapted to the Tech Race, albeit slowly, but that is a game which that can't compete with when you compare them to Honda or Hyundai. Yeah, Mercedes and BMW's are built great and drive wonderfully. I used to wrench on them as well, but when it comes to transportation for people, when people are sitting on the cusp of spending an extra 10-20k to get into a "luxury" vehicle and it doesn't have a backup camera or CarPlay...People start to feel shafted a bit. How do you explain that to them?

I see people holding their cars a bit longer especially with the uncertain economy ahead. As far as CarPlay, Pioneer and Alpine are a simple click away to get that fixed for ya! Yeah, it isn't "built-in" but it works!
Reactions: edgr.sanchez
You must log in or register to reply here.
Share:
Facebook Twitter Reddit Email Share Link
Register on MacRumors! This sidebar will go away, and you'll see fewer ads.
Sign Up
Top Bottom