Resolved cMP 4,1>5,1 CPU B daughterboard not seeing all RAM

EDIT : I just noticed on my last boot up that only 4 of my 8 RAM slots are shown in System Profile/Memory

last Friday afternoon my 4,1>5,1 2009 8 Core cMP shut down and would not start up.
No chime and also CPU B's RED LED was turned ON. No fans were working at all.

1.
I removed the PSU and thoroughly cleaned & de-dusted it it

2.
I cleaned the Northbridge heatsink and re-applied Arctic Thermal Ceramique 2 & while I was at it I replaced the Northbridge rivets and also added a non-conductive washer under the rivets on the underside to give it a tighter grip ( similar to the nut & bolt technique.

3.
I removed both CPU A & B - thoroughly cleaned and re-applied thermal.

4.
I noticed that 4 of the pins on CPU A socket were bent. I used two magnifying glasses and non-conductive, clean, shaved to a fine point . . bamboo toothpicks ( I live in Japan ) to re-align the socket pins.

5. Installed only CPU A and after a few tries . . got it to boot up. with no RED LED's on the daughter board.

( currently everything non-essential have been removed. Just a HD 5770 + keyboard & mouse )

( NOTE : I have only installed DIMMS from the original supplied 12 gb matched 2Gb DIMMS )


My question :​
Why aren't any of the DIMMs installed in CPU A nor CPU B ram slots 3 ~ 8 ( correct order/slot placement ) being recognized.


Only DIMMS placed in CPU A 's slots 1 & 2 are recognized.​
NOTE : In installing CPU B I tightened the heatsink to "barely fingertight ".. and then one more full turn for each of the four bolts. How tight should the HEX bolts be ?

I recall seeing threads regarding similar problems as I am experiencing but yet cannot find a definitive solution.

PS : Of course I have done both PRAM & SMC resets and I als oreplaced the motheboard CR2032 battery.

The Xeon 5570 in CPU B is not starting. The CPU B socket has NO bent pins. The PSU is OK.
All fans spin up correctly including on CPU A & B. The Nortbridge heatsink is now "nut & bolt" attached to the tray with non-conductive washers top & bottom

The Xeon 5570 itself appears to have no discolouration or visible damage.

1. I'm gradually coming to the conclusion that the Xeon 5570 that is currently in CPU B and was in CPU A at the time of the original shutdown failed for whatever reason - we had thunderstorms here at the time of the
failure.

2. I have tried EVERY possible configuration - even removed most of the Blue Loctite from the CPU B bolt threads to give me a finer touch when tightening the Hex bolts. in the correct Apple designated order.

3. Thoroughly cleaned and re-applied Thermal paste to the CPU B Xeon 5570.

The fans do NOT ramp up their speeds.

I can install and see 10Gb of my original 17Gb RAM only if installed on CPU A side slots 1~3.

Sys Info/Hardware shows only ONE processor which is in CPU A.

Sys Info/Hardware shows only ONE processor out of TWO- the Xeon 5570 in CPU B is not working/shown.

For some unknown reason I cannot upload a screengrab jpg of Sys Info/Hardware info but
in the " Number of processors : it shows " 1".

In any case I have bought a "in pristine condition " 2009 2.93 Dual Quad processor board with 32Gb of heatsinked RAM. It should arrive around July 20th.

Pricey but I absolutely need my cMP for my business.
Last edited: Jul 11, 2018
Comment

MIKX said:
Sys Info/Hardware shows only ONE processor out of TWO- the Xeon 5570 in CPU B is not working/shown.

For some unknown reason I cannot upload a screengrab jpg of Sys Info/Hardware info but
in the " Number of processors : it shows " 1".

In any case I have bought a "in pristine condition " 2009 2.93 Dual Quad processor board with 32Gb of heatsinked RAM. It should arrive around July 20th.

Pricey but I absolutely need my cMP for my business.
Click to expand...

I managed to get "CPU "A" working with all memory installed on that side showing up.
SysInfo now showed my cMP as a"Single Quad Core 2,93Ghz.10Gb RAM.
Strangely enough, ALL fans (including the one on CPU "B" ) work with no speed ramp up.
Could be a damaged socket or damaged x5570 in CPU B">

If I can restore the old processor tray to full functionality I will then order some more powerful CPU's
but in all honesty .. I'm happy just to have my cMP back in good health. 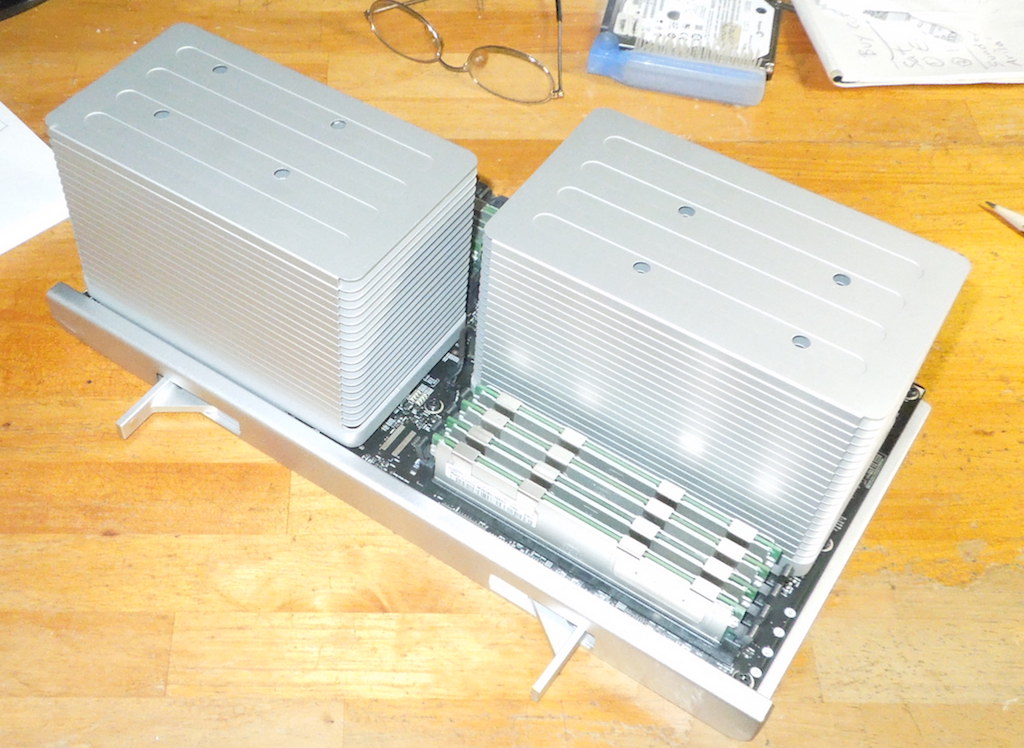 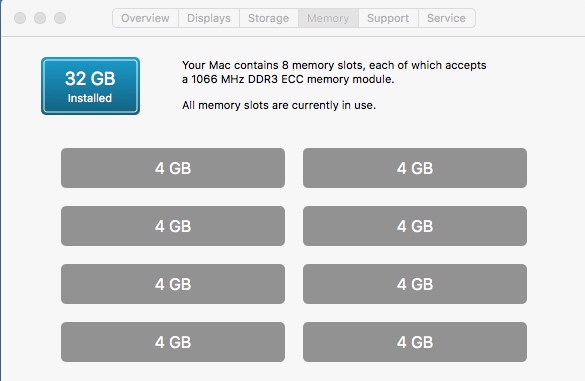 Today at 4:20 AM
TuurT
T
D
MP 7,1 Is the new Apple pro display physically in stores so we can see it yet?

MP 1,1-5,1 High Sierra Luxmark does not see OpenCL all Devices CUDA-Z do, why?