Following approval of Apple's plans for its new "spaceship campus" by the City of Cupertino's Planning Commission earlier this month, the full Cupertino City Council has just given its unanimous approval to the project at its October meeting. The approval came after more than six hours of discussion this evening, with many statements of support and some expressions of concern from members of the community, and the approval was met with significant applause by those in attendance.

Today's approval is final pending any petitions for reconsideration, which must be filed within ten calendar days. If no petitions are received within that period, Apple will be granted ancillary permits to begin demolition of the former HP campus currently located on the site, as well as utility relocation, tree removal, and construction of a temporary sound wall. The formal agreement between Apple and the City of Cupertino must be given a second public reading, scheduled for the council's meeting on November 19, and Apple's full set of permits would go into effect the following day. 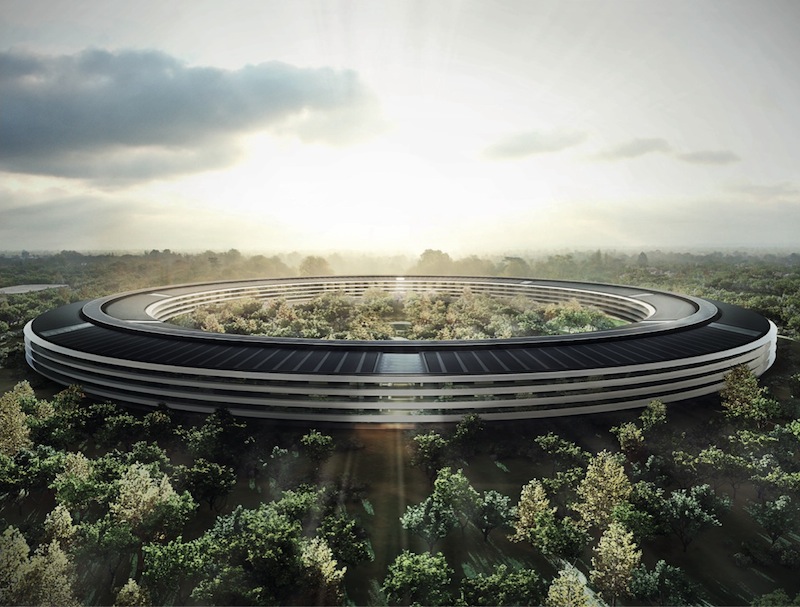 Apple's plans for Phase 1 of the project call for a 2.8 million square foot ring-shaped main building with an underground parking facility for nearly 2,400 vehicles, a 100,000 square foot fitness center, a 120,000 square foot auditorium, a main parking structure with space for nearly 6,000 vehicles, and assorted other minor facilities. A second phase of construction would consist of 600,000 additional square feet of office and research and development buildings, as well as other parking and energy generation facilities.

Update: Apple CEO Tim Cook has issued a Tweet about the approval, interestingly quoting the title of our own article on the topic.

Samsung Smart Camp right on the way, next to the Apple Campus.
Comment
A

What if it really is a spaceship and Captain Tim leaves all of us so we're stuck with phones with fingerprint sensors in weird places?

This isn't much of a shock, it was always going to be approved!
Comment
D

Hopefully once it's done they can get back to work on the PowerBook G5.
Comment

To explore strange new designs.
To seek out new hardware and new operating systems.
To boldly go where no campus has gone before.
Comment
G

Our modern Pharoah, Tim Cook, finishes the pyramid to his predecessor's legacy. But alas, will he later build his own smaller pyramid closer to the road to Egypt, making it appear larger to those who visit?
Comment
A

Is the address changing from 1 Infinite Loop ?
Comment
F

Peace said:
Is the address changing from 1 Infinite Loop ?
Click to expand...

This will be their second campus. They're still keeping their campus at 1 Infinite Loop (and yes, this campus will have a different address).
Comment

It would have taken a real clown to vote no.
Comment
R

AlligatorBloodz said:
What if it really is a spaceship
Click to expand...

I can't wait for the iPhone 15 and for this campus to be completed.
Comment
I

it's a shame they couldn't buy out that one apartment complex in the corner of that chunk of land and have that whole "block" to themselves.
Comment
J

ferdinandcc said:
This will be their second campus. They're still keeping their campus at 1 Infinite Loop (and yes, this campus will have a different address).
Click to expand...

The Maps icon in iOS7 is the location of the new campus btw.
Comment

They need to build it, to take Steve back to his home planet
Comment
D

Steve would never have allowed this.

A self contained "apple city" where the real world needs for function over form doesn't intrude and Johnny Ive can design the i-Pebble, a perfectly smooth non-functional work of art that retails at $2000, and is made obsolete by the i-Pebble 2 9 months later
Comment

Right because Apple is a university now and I can enrol in a bachelor of computer engineering...etc at Apple University. Nope? Oh right... it's just a training facility for Apple staff? Great.

How long has this been in the pipeline anyway? 10 years at least? I assumed it had already been built.
Comment
E