Dell (and Others) Trying to Catch Up with Apple's Style

With CES right around the corner, the Wall Street Journal looks at a growing focus amongst PC manufacturers: design. With increasing competition and the clear appeal of Apple's industrial design, PC manufacturers are increasingly focusing on the physical designs for their upcoming computers. This is a sharp turn-around from the corporate attitude only a few years ago:

David Hill, Lenovo's vice president of corporate identity and design, said his teams once played a secondary role to the technical side of product development. Now designers "have equal weight at the table," he says.
Click to expand...

At Dell, in 2001, some were even lobbying for the elimination of the Design Director job as it was seen as "unnecessary". At the time, Dell only employed 6 designers, but this number has been increasing in recent years and is up to 90 as of today.

Designers are now exploring alternative materials and industries as inspiration for design techniques. Much of this is reminiscent of earlier articles describing how Apple's Jonathan Ive spent time in a candy factory to study jelly bean manufacturing when designing the plastic enclosure for the original iMac. An earlier TechnologyReview article recounts Apple's design process over the years. 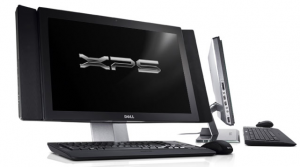 The efforts appear to be paying off for some PC manufacturers. Sony reveals that their pink Vaio has sold more than any other color. Meanwhile, Walt Mossberg gave Dell's new XPS One a favorable review and claims it "matches or exceeds the iMac in hardware design".

Design is expected to take center stage at the Consumer Electronics Show (CES) which kicks off this Sunday in Las Vegas, NV. Microsoft will be hosting a PC "fashion show" during their keynote to highlight some of the best designs.

I thought the iMac was expensive. What's up with the XPS One?

Their wireless keyboard has a number pad and arrow keys on it!

(or at least I think it does... kind of hard to see what keys the keyboard has and doesn't have from this angle.)

The computer actually looks pretty good I think. Except the dies... why is there so much non-screen to either side of the screen? How big is that screen anyways (and what is the resolution?)

Design is expected to take center stage at the Consumer Electronics Show (CES) which kicks off this Sunday in Las Vegas, NV. Microsoft will be hosting a PC "fashion show" during their keynote to highlight some of the best designs.

I guess it is god the industry is trying to catch up, hopefully this will bring even better products from Apple.

Sitting on a rig somewhere

At least they're trying
H

Welcome to earth dell. With exceptional service and a great level of customization they have most targeted businesses and upper middle class consumers. With the pale and very boring designs they have neglected the traditional home user.

Thankfully they have realized why their computers aren't a hot topic amongst the cool kids. They are walking on the right path now, the XPS and MX1530 looks really good. But since many here are apple fan boys you will use this thread to bash Dells instead. All they need now is a design chief to create a uniform design or image for their future computers.
B

I think Dell is going to try to hard to make their products look good, and they won't match the simplicity of Apple's hardware.

MacRumors said:
At Dell, in 2001, some were even lobbying for the elimination of the Design Director job as it was seen as "unnecessary". At the time, Dell only employed 6 designers, but this number has been increasing in recent years and is up to 90 as of today.
Click to expand...

when you're dealing in commodities (PC's), it's pretty basic that styling would be the differentiator.

Quote:
David Hill, Lenovo's vice president of corporate identity and design, said his teams once played a secondary role to the technical side of product development. Now designers "have equal weight at the table," he says.

i saw a guy with an XPS at a starbucks in weho. it's pretty interesting; then again, once you go up to it and find out it's not actually a 2x" laptop but a "portable" desktop someone's hauled out for a walk like the dog, it's not so big a deal anymore.

pretty cool, though. for a Dell...

It's worse in person.
C

Those are multimedia capacitive keys not a number pad on the right. It also has a fn key like laptops. I would say it's a nice first effort for an all-in-one for Dell, but I certainly don't think it measures up to an iMac.

Just took a quick peak at dell's online order for the XPS all-in-one....
Not really a bash on the product, more on the order system. Why don't they list the clock speed?
Why do I care what the model number is for the processor? I want to know the speed! I couldn't find any easy way to see exactly what clock speed that xps ran aside from looking up the processor model through intel.

edit: Not the order system, I mean the product description

Some of the new designs are fine (other than costing more than Macs and not running OS X). But I would NOT want cables spewing out of the side of my screen. It's no wonder the ad photos don't show stuff plugged in there.

I have no trouble turning my iMac towards me to get at the rear ports. It's light and turns easily. The cords then thread through the big hole in the stand, out of sight. (And if I really wanted easier access to USB ports I would have just gotten the regular Apple keyboard, with USB hub built in, instead of the Bluetooth one.)

It's certainly nice to see other companies following Apple's lead and improving their designs, or at the very least making a more serious attempt.

Ha ha good luck - next my gran will turn emo

In my tests, I found the XPS One to be much better designed and equipped than Gateways iMac competitor, also called the One.
Click to expand...

Taking a lack of originality to new heights.

We have already seen PC manufacturers attempt to copy Apple's designs. Such as E-machines, and those ridiculous "colored" HP's in the late 90's when the iMac first came out. From what I recall, they were huge flops.

Eidorian said:
It's worse in person.
Click to expand...

I second that! In fact, I just saw one the other day. It's really not as great as it is hyped up to be.

Wayfarer said:
I second that! In fact, I just saw one the other day. It's really not as great as it is hyped up to be.
Click to expand...

I had a chance to see it in person at a local Best Buy. It doesn't really have much on the iMac other then desktop components.

I saw one of the Dell's (XPS) in person. It's nice. Nicer than many PC's, but IMHO it's not nicer than an iMac. The iMac has a simple, clean and elegant design where the XPS is more bulky and busy. One thing I did notice about the Dells... especially their XPS laptops that are trying to compete with the MacBooks... they feel cheap! Thin plastic'y feel. The laptops felt like a toy.

It's good that PC makers (or any product designer) is taking design more seriously... it's one of the big things that makes Apple stand out... but they need to look at quality too... it's the other half of an Apple product that really makes their hardware stand out. Great design and quality.