The ultra-popular game Flappy Bird, removed from the App Store in 2014, may be making a comeback in the form of an interactive macOS notification. 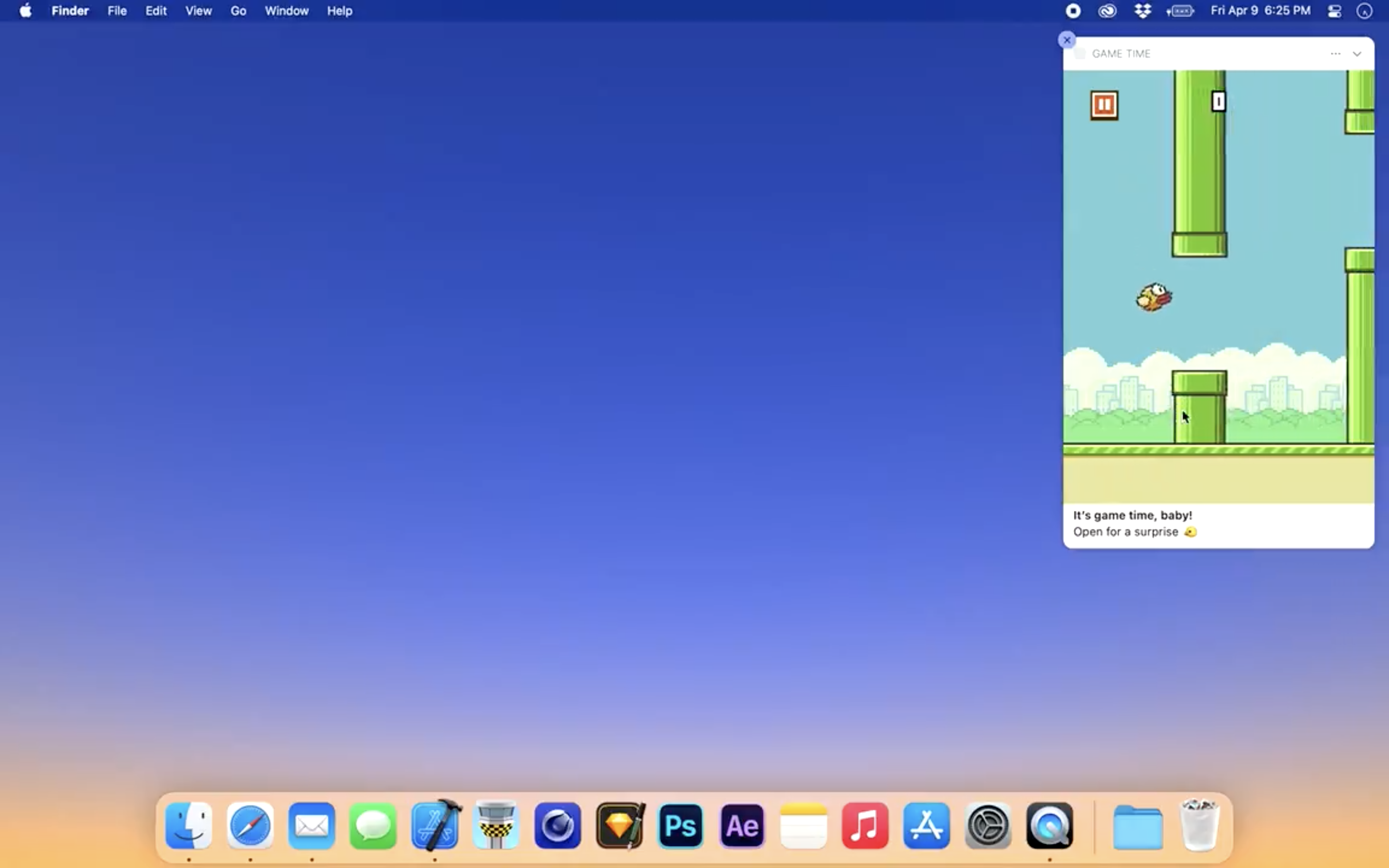 Utilizing the new UserNotificationsUI framework added in macOS Big Sur, designer and developer Neil Sardesai has been able to put a clone of the game created by PlayCanvas creator Will Eastcott into a notification. Showcased on Twitter, Sardesai has utilized interactive elements inside of notification to recreate the game, with mouse clicks representing taps.

For those unfamiliar with Flappy Bird, the game consists of guiding a bird through as many pipes as possible without hitting them. The bird, named Farby, moves up with every tap, and users must ensure that Farby doesn't hit any obstacles along the way, or else the game ends.

The app grew immensely popular in 2014, even at one point generating $50,000/day thanks to in-app ads. Despite its removal from the App Store, a number of games to this day continue to be made and played with inspiration from Flappy Bird. You can learn more about Sardesai's interactive notification version of Flappy Bird on Twitter.

I still maintain that Flappy Bird got shut down because Nintendo threatened to sue the life out of the developer and not because of any moral quandary he faced.
Reactions: Superman730, mono1980, Oblivious.Robot and 11 others

levitynyc said:
I still maintain that Flappy Bird got shut down because Nintendo threatened to sue the life out of the developer and not because of any moral quandary he faced.
Click to expand...

That would have been public.
S

Might be a good idea for one of those brain game companies. Send a puzzle notification every 30 min to distract your brain and get you thinking about something different.
Reactions: Superman730, martyjmclean, TropN and 14 others

These notifications fly by, and are light as a feather on system resources.
Reactions: ss2cire, surf2snow1, Manzanito and 3 others

I hope this doesn’t mean that we will one day get apps with ads as pop up notifications. I would hate the macOS to be filled with as many ads as the iOS is.
Reactions: Oblivious.Robot, insomniac86, Nermal and 8 others
G

Life seemed simpler when this game was the big discussion point, feels like an eternity ago now
Reactions: trashmac, mdw1, kc9hzn and 3 others

Finally, a reason to turn on notifications.
Reactions: max.ine, japanime, Shirasaki and 5 others

Should be banned and deleted from every universal timeline otherwise someone will turn the game into an nft that uses one city worthy of electricity per play.

I only wish this meant more rich notifications like they have in Android - I had a nexus 4 once, and I still remember some of the dynamic stuff their notifications could do.
1

I would find that too distracting.
Reactions: qoop

tranceking26 said:
Doom will be next ?
Click to expand...

Doom is a good game so I will count on it.
Reactions: ikir and TheYayAreaLiving 🎗

qoop said:
More trash to clog up your machine. Ugh.
Click to expand...

Yeah, it’s gonna suck out all your storage.
Reactions: Shirasaki, innovationwho and TheYayAreaLiving 🎗

Notifications are really weak in Apple. I hopethis encourages them to make more options (like giving an option to have a persistent alarm).
M

I remember that game what happen to it?

Who cares.
Reactions: martyjmclean, Shirasaki, B4U and 6 others
J

iapplelove said:
That would have been public.
Click to expand...

Not necessarily, if it was just a C&D letter, no?
Reactions: martyjmclean, japanime and windowsblowsass

Flappy Birds was 7 years ago?

Holy crap, it really was that long ago. If you’d asked me to guess, I would have said it was 3 or 4 years ago.
Reactions: bpp85, ikir and EmotionalSnow
You must log in or register to reply here.
Share:
Facebook Twitter Reddit Email Share Link
Register on MacRumors! This sidebar will go away, and you'll see fewer ads.
Sign Up
Top Bottom