AT&T today announced that its DirecTV Now service has been updated with support for Apple's TV app.

With TV app integration, DirecTV Now users can take advantage of cross-device episode and movie tracking with the Up Next feature along with tailored content recommendations available on the DirecTV Now service using the Watch Now feature on the Apple TV. 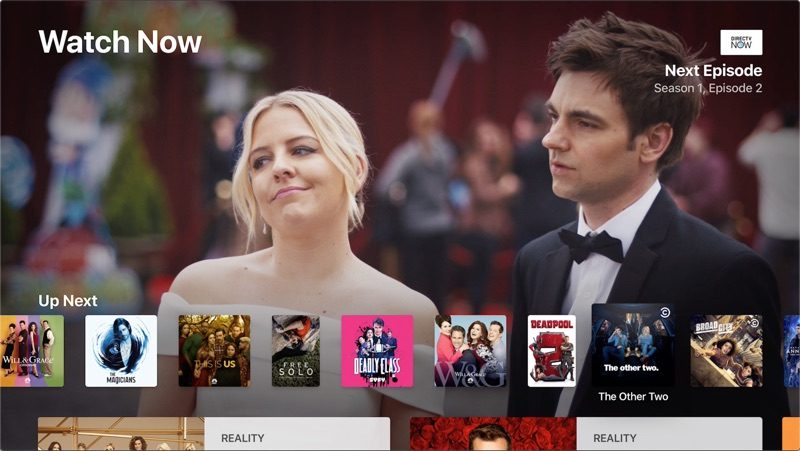 There's so much on-demand content and live sports channels included with your DIRECTV NOW subscription, so the Apple TV app is a great place to help you find something new or jump back into your favorite on-demand show as new episodes arrive or quickly tune to a national sports broadcast.
Click to expand...

The integration also means that Siri voice searches can be used to find TV shows and movies on DirecTV Now, which is useful for finding specific content. Siri searches work with the entire DirecTV on-demand library. 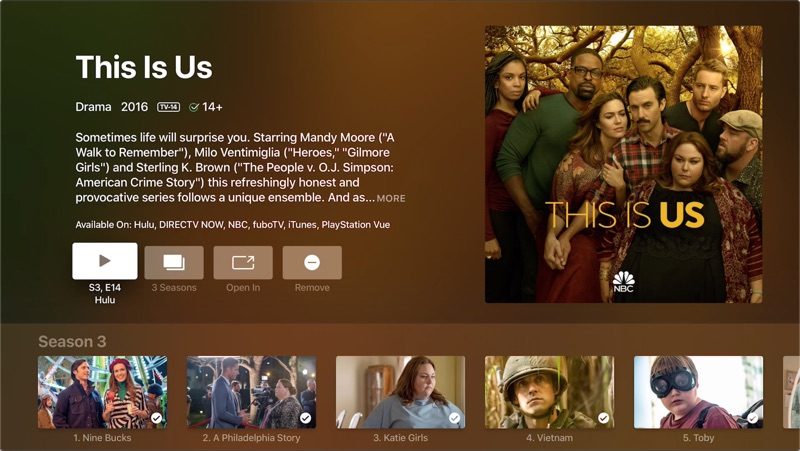 Siri also supports live tune-in with DirecTV Now so you can access specific live channels with a command like "Siri, tune in to [your favorite channel]" to open up the DirecTV Now app and turn on the channel. 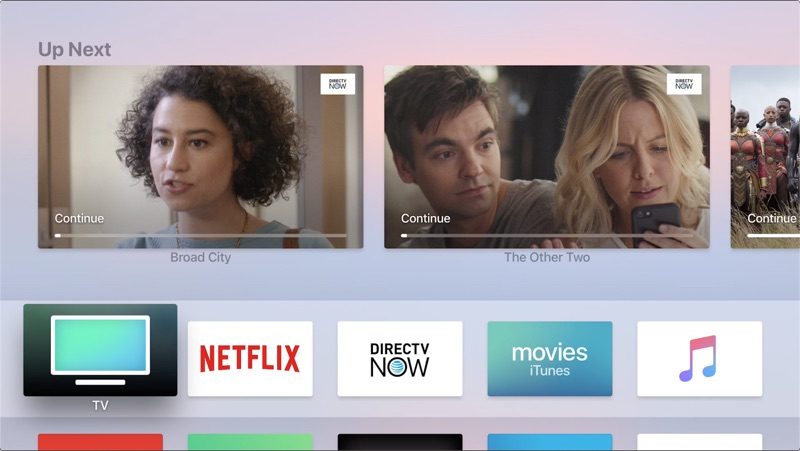 The final feature included in the integration is single sign-on, which allows DirecTV customers to sign in once with their username and login to access available content across any supported third-party app.

Apple TV users with a DirecTV Now subscription will see a prompt to integrate their data with the TV app after playing a DVR show for the first time. AT&T says that the updates enabling TV app support will be pushed out to DirecTV customers automatically.

Update: DirecTV's live tune-in feature designed to let you watch live TV channels through Siri voice commands isn't actually implemented just yet and will be coming at a later date. The other features mentioned in the article are, however, live and available to DirecTV Now subscribers.

Cue the DirecTV/Cable hater comments, but I gotta say, I'm kinda longing for the old days. Today's TV landscape seems to be getting even more fragmented and expensive with every studio and their nephew starting their own streaming service.
Reactions: millerlite, Peter K., DaveN and 2 others
Comment

Well I’m excited for this, it seems myself and a lot of other users are having issues getting it to work so it must be a slow roll out.
Comment

NOW if DirecTV could only fix their sorry app on the Apple TV, that may actually help founding users who are leaving for YouTubeTV, like me. It is junk and their support model is as well. They need an ITSM course in Service Delivery.
Reactions: cashville2400, AppleFan78, jacklivehere and 2 others
Comment

Hooray! Time to redownload the TV app. I've been with DirecTVNow since the beginning. 2 free Apple TV, and this new Android TV box I'm testing now. Grandfathered into the AYCE package for $40/m, love it.
Reactions: imlynxy
Comment
T

Now if they would just support the TLC app they'd have everything in place (and fulfill my wife's hangup) so we could switch. Surprised they didn't make this a full version update (seems like a lot for .x app update).
Comment
S

Good! This will be pretty convenient. Now just need more third party apps to support directv now or vice versa. And need dvr to work consistently. And need better UI, but Siri support helps negate that. And one big problem with ondemand: rewinding to an earlier part in the program (just for a few seconds to see something you missed) shouldn’t force you to watch all the commercial blocks again just to get back to where you left off!!!
Last edited: Mar 7, 2019
Comment
T

"The final feature included in the integration is single sign-on" FINALLY! DirecTV Now was never listed so it was unable to do this previously, just regular Direct TV. Glad to see they finally added it.
Reactions: technole and BigRed1
Comment

MacRumors said:
The integration also means that Siri voice searches can be used to find TV shows and movies on DirecTV Now
Click to expand...

This is really nice.

I don't use DirecTV Now, but I do pay for a sub for my parents to use, and I am sure they will be happy about this.


MacRumors said:
AT&T today announced that its DirecTV Now service has been updated with support for Apple's TV app.
Click to expand...

Does anyone enjoy the TV app?

I tried it at launch, but couldn't get into it, especially since it didn't have Netflix support. I just recently tried using it again to watch a tv show I purchased on iTunes, and the app is still horrible.

Another problem is that I want to watch the iTunes version of the tv show, but it always goes back to Amazon Prime Video for some reason.

The biggest issue for multiple users is that there is no account or profiles for different users, making the TV app useless if two different users watch the same shows.
Comment

I was just thinking about this missing feature last weekend. I hope it updates by the time I get home.
Last edited: Mar 7, 2019
Comment

redneckitengineer said:
Hooray! Time to redownload the TV app. I've been with DirecTVNow since the beginning. 2 free Apple TV, and this new Android TV box I'm testing now. Grandfathered into the AYCE package for $40/m, love it.
Click to expand...

I'm amazed anyone can stomach watching USA TV with the huge number of commercial interruptions. Even with recording and watching later so you can "skip the commercials" the commericals ruin the shows' flow. In other countries the commercials are done between the shows and not actually during the show which is far more acceptable.
Reactions: imlynxy
Comment
R

theinstructor said:
NOW if DirecTV could only fix their sorry app on the Apple TV, that may actually help founding users who are leaving for YouTubeTV, like me. It is junk and their support model is as well. They need an ITSM course in Service Delivery.
Click to expand...

I'm also an initial, grandfathered AYCE package, using a few Apple TVs and an Amazon Firestick. I'm very pleased with live-watching TV and have had very few issues even at the initial launch. However, support is TERRIBLE and needs an overhaul. The DVR service is a long way from usable and should have never been released as is. What I find most annoying, however, is the Apple TV remote. I'm constantly changing channels and it's a terrible navigation experience. Using DirecTV Now on the Firestick with its remote is a much more enjoyable experience. I look forward to these changes, however, as resuming where I left off on another Apple TV would be a nice feature and SSO is a must.
Comment

Is Siri integration working for anyone, when trying to tune to a specific channel on DTN?
Comment
M

Another amazing Apple feature... or not! Great job Cook!

BasicGreatGuy said:
Is Siri integration working for anyone, when trying to tune to a specific channel on DTN?
Click to expand...

Not working for me yet. Have seen slow integration throughout the system but not all the full features.
Reactions: Apple_Robert
Comment
B

I haven’t read the whole article yet. They make me work. Lol. Did it say if the iOS TV app will have directv now integration ? Thanks.
Comment
L

jsalda said:
Cue the DirecTV/Cable hater comments, but I gotta say, I'm kinda longing for the old days. Today's TV landscape seems to be getting even more fragmented and expensive with every studio and their nephew starting their own streaming service.
Click to expand...

The good thing about a subscription is you’re locked to it for only a month. So with a little planning and patience, you can watch all the content you want by bouncing around to different subscriptions one or two or three at a time. These subscriptions make it very flexible for people, regardless of the growing number of them.
Comment

I tried DTV Now when it launched. Did not care much. DTV satellite keeps me going because they lower their prices so I stay as customers. $39 for over 200 channels/locals/some sports is way better than any streaming out there.
Comment
S

Can you use Siri to get to a specific channel on DTV NOW from the Apple TV home screen? Or do you have to open the DTV NOW app first? If the latter, booooooooooo.
Comment
C

I ditched DTVN, mainly for the lack of these two features. Now that I’m used to a working cloud DVR and I’m able to pause live TV, it would be hard to leave PS Vue. I do miss the $5 HBO.
Comment
A

According to the release notes, you can now use Siri to launch a channel. I can't figure out how to make that work. Whenever I've said 'Watch (channel)" or "Watch (channel) on DIRECTV Now", Siri prompts me to go to the App Store to either download that channel's app or an app for a competitor's streaming service (i.e. Fubo TV). As with most things DIRECTV Now does, the new feature they're touting seems to be either half baked or completely broken.
Comment
You must log in or register to reply here.
Share:
Facebook Twitter Reddit Email Share Link
Register on MacRumors! This sidebar will go away, and you'll see fewer ads.
Sign Up
Top Bottom