Do you think we will be able to take our iPhone SIM out and put it in the Tablet?

Assuming that the tablet goes to AT&T and assuming it has 3G connectivity:

I really hope we can take our iPhone's SIM out and put it in the tablet. That would be amazing and I wouldn't have to chop off my other arm to give to AT&T to pay for data.

Do you think this will be possible?

I kind of doubt it myself since AT&T is a greedy giant telco, but it would be really cool.

I can take it out of the iPhone and put it in my netbook, Fuze and Blackberry. Unless Apple invents it's own way of doing things in the hardware (which wouldn't surprise me at this point), I don't see why it wouldn't work. Assuming this tablet actually happens and anyone is in the mood for more overpriced hardware.
Comment
C

+1 - I would have said it is not even a consideration for a tablet, but then again they are apparently going to try and squish Amazon/Kindle and thus will probably have 3G capabilities built in - like the Kindle does.
Comment

And assuming that AT&T doesn't require a LaptopConnect plan for said tablet.
Comment

I was under the impression that IF (really big IF there) a tablet happens, it'll be a tablet computer and have nothing to do with any cell carrier. I haven't seen any of the rumors which point to this fictional product being a cellular device of any sort.
Comment
M

jmb667 said:
I was under the impression that IF (really big IF there) a tablet happens, it'll be a tablet computer and have nothing to do with any cell carrier. I haven't seen any of the rumors which point to this fictional product being a cellular device of any sort.
Click to expand... 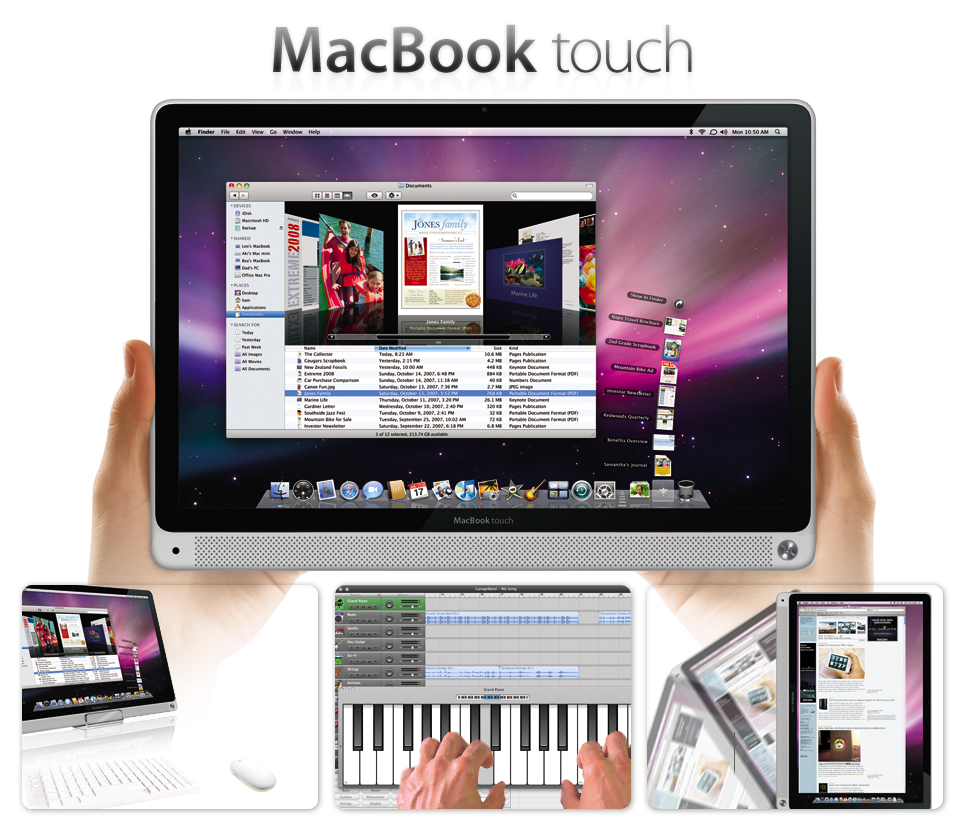 So you could have an internet connection anywhere you can get a 3G signal. No, you've never been able to before in a Mac laptop, but this device isn't likely to be 'just' a Mac laptop without the keyboard.

Some are hoping it's a full featured Mac Laptop running Mac OS X with a enhanced interface to take advantage of the multi-touch screen.

Some are hopping it's a large iPhone running a variation of the iPhone OS.

It will probably be something in between, but if it can't run regular Mac apps, I'm not interested. I tolerate the limitations of the iPhone for a phone sized device, but wouldn't accept them for a larger system.
Comment

macintosh.apple said:
They pretty much all have
Click to expand...

Must have missed those...all I ever saw (or that I bothered reading, because it's all still speculation) was something like the "macbook touch" like what was posted above. No 3G, just a tablet computer.

Just to make something clear this is just a discussion of using your iPhone's SIM in what ever 3G connectible data products Apple may release in the future.

Does anyone know if their iPhone 3G ( or 3GS) works in their original iPhone without Jailbreaking/unlocking?
Comment
R

I'd rather it just seamlessly tether with my iPhone and not have to deal with taking the sim card out.
Comment
K

Well, IF Apple actually sells a tablet form computer. And it was targetted for ATT. You would have to hope that it used the correct APN for your iPhone plan, or you still wouldn't have data.

And isn't it likely that ATT would realize that you aren't connecting a phone?
Comment

christall109 said:
Just to make something clear this is just a discussion of using your iPhone's SIM in what ever 3G connectible data products Apple may release in the future.
Click to expand...

Actually, what you asked was if you would be able to put your iPhone SIM in the tablet. As several of us said:

If you are simply asking about the technical aspects of SIM compatibility, I believe AT&T has been issuing 3G SIMs since at least 2005, all of which should work on any AT&T 3G phone. That doesn't mean that you won't be required by AT&T to change your services if you start using such a card in a new device.
Comment

If the Tablet is on Verizon, then it won't take sim cards.
Comment

that is pretty sweet ...awesome job (whoever made it! )

O
iPhone 11 Able to purchase AppleCare in UK for iPhone purchased in the US?

J
iPhone 11 Pro Am I able to exchange iPhone 11 Pro for a different color on IUP after exchange/return window?

V
iPhone SE Would you be able to easily see drops or specs of water on the screen?