Dropbox today announced changes to its Pro subscription, offering a single plan that provides up to 1 terabyte of storage for $9.99 a month or $99 per year. The new Pro plan also improves its sharing controls and adds new security options that make it easier and safer to share your data with friends, family and colleagues. 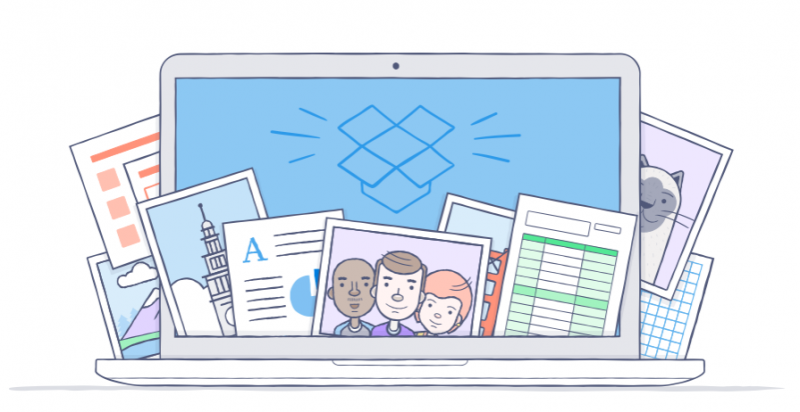 The new Dropbox Pro makes it easier to secure your shared data with new password and expiration options. Pro plan users now can add a password to a shared link as well as set an expiration date that limits how long files are being shared. When sharing a folder, Dropbox now has a new "View-Only" permission option that controls whether recipients can view or edit files within that shared folder.

For smartphone, tablet and notebook users, Dropbox has added a new remote wipe feature that allows users to delete files from a lost or stolen device. This feature destroys the data on the compromised device, while keeping a copy safely stored on Dropbox's servers.

Dropbox's biggest change is in its pricing, with the Pro plan now offering up to 1 TB (1,000 GB) of data for $9.99 per month. This pricing leapfrogs Amazon with its 1TB/$500 yearly plan and brings Dropbox in line with Google, which also offers a similar 1TB/$10 monthly option. Apple is launching its own iCloud Drive solution later this year alongside iOS 8 and OS X Yosemite, but pricing at the 1 TB level has yet to be announced. Apple's 200 GB plan will be priced at $3.99/month.

Looking forward to Apple's 1tb option. Wonder if we will be able to back up our iTunes account with it.

I'd cry if I lost all my movies etc. (should really get them through iTunes really)
Comment

If only it wasn't slow as molasses this would be a good deal. Whenever a client sends me a drop box link to download a project it takes foreverrrrr and I'm only talking like 60 Mbs
Comment

If they had a reasonably priced 100GB option, I'd switch back.
Comment

So when will we see this show up on our account? Mine is still showing 100GB + the free storage I've earned (140GB total).


MonkeySee.... said:
Looking forward to Apple's 1tb option. Wonder if we will be able to back up our iTunes account with it.
Click to expand...

Well, it's supposed to work like Dropbox (more of a Drive), so anything you've set to sync, I presume, would be stored in the cloud. But aren't all your iTunes purchases already stored in the cloud? Or are movies not stored? I don't have many movies through iTunes.


CrAkD said:
If only it wasn't slow as molasses this would be a good deal. Whenever a client sends me a drop box link to download a project it takes foreverrrrr and I'm only talking like 60 Mbs
Click to expand...

Dropbox usually maxes out my upload bandwidth, and downloads are usually pretty fast too. Make sure you change Dropbox network settings to "don't limit" for maximum speed.
Comment
N

This should have been posted in the News aswell...

Already a Pro user? Dropbox will update automatically in the next couple days. You dont have to do a thing.
Click to expand...

Why would I pay $99 for 1TB of Dropbox space when I could pay the same $99 to Microsoft and get an Office 365 subscription that includes 1TB of OneDrive space? They've got to do better on pricing.
Comment

just picked up a SpiderOak unlimited storage plan for $125/yr. This was a limited promo though.
Last edited: Aug 27, 2014
Comment

That sounds like a decent deal and I like the added security options. Though, I am using their free plan, and with several referrals over the years, I have 9.88 GB of available storage and am only using 2.3 GB right now.
Comment
L

CrAkD said:
If only it wasn't slow as molasses this would be a good deal. Whenever a client sends me a drop box link to download a project it takes foreverrrrr and I'm only talking like 60 Mbs
Click to expand...

Dropbox is lightening fast for me. OneDrive is awful for me and is easily 50 times slower at copying files to and from the cloud. When it's smaller files it's not a big deal but larger files take an age on OneDrive.

I'm a very happy Dropbox customer and even happier that my storage is being increased to 1TB for the same price!
Comment

Because in various reviews, Dropbox is usually the fastest. Their software is better optimized for sending and receiving data. For instance, I think many cloud storage providers (including Dropbox) run on Amazon's S3 servers. But Dropbox is consistently faster than Amazon's storage offers. Dropbox is always adding new features, and many people don't need or want anything to do with Office. They just want a solid, fast storage platform. Dropbox always has room to improve, but most people agree they're the best out there or at least one of the top ones.
Comment

I agree with you in principle, however as much as I've wanted to love OneDrive, I've found it to be exceptionally slow to upload in comparison and it still has the filesize limit of 2GB which is a showstopper for me.

In itself, OneDrive is a great deal but it just doesn't work for me.
Comment
N

As a current Dropbox subscriber, this is excellent news. I only wish they would improve the selective sync controls for their client -- specifically I want to be disable all folders except those I whitelist. Also, being able to sync from multiple drives (multiple folders) would help, otherwise a lot of that 1TB will be hard to use.

Other than that, I'm mostly a happy with Dropbox, though on older machines, indexing can sometimes take a lot of time, and uses a lot of CPU.

I also have a Google Drive subscription that I got with my Chromebook. Now that I have 1TB with Dropbox, I'm going to move a lot of that out of Google Drive. BTW Google Drive supports the whitelisting thing I want, but is not as fine-grained as Dropbox, you can only whitelist top-level folders. Also I always have issues with Google Drive whenever I restore a Time Machine backup and have to re-download the whole folder again (which I do for hard drive upgrades). Dropbox has the better Mac client vs Google, though it's not perfect.
Comment

I was really considering canceling my dropbox once the new iCould plans come out, but now I think I will just keep dropbox as a backup to my iCloud.
Comment
P

I tried sharing a 720p H.264 video the other day using DropBox. The share link is a webpage where you have the option to watch the video or download it. The problem is they compress the watchable video on the link even more than it already is. The highly compressed audio sounds absolutely awful and the video is loaded with unwanted digital artifacts.

Since I would send these links to clients for viewing, I want them to watch it in the quality I intended and not a horribly lower quality that Dropbox thinks is acceptable. I don't want to say, "Here's the link, but don't watch the video that immediately comes up, instead click the download link and watch the video file that way." Dropbox should ad an option to allow actual HD quality to be viewed on the shared link, or just have a Download only option. Until then, I will only use their service minimally for the occasional quick file share and stay within the free account's data limit.
Comment

MonkeySee.... said:
Looking forward to Apple's 1tb option. Wonder if we will be able to back up our iTunes account with it.

I'd cry if I lost all my movies etc. (should really get them through iTunes really)
Click to expand...

I have never understood... iTunes = Tunes - Maybe: iMovie = Movies??? OR maybe remove all the "i's" Its really old. I think Mr Jobs liked the whole "I" thing...
Comment

If iCloud drive gets it's own app on iOS, then I will consider switching to iCloud drive. My problem with Dropbox is that the plans seem kind of expensive for my uses. All that I want to be able to do is sync my 4GB Documents folder from my MacBook Pro so that I can see it on my iPhone, but I do not want to pay the prices of Dropbox (I only have 4.3GB of space from referrals and such). If iCloud drive had it's own iOS app (like Dropbox has), I would definitely switch to iCloud drive because of the low prices Apple will be offering (20GB/$0.99 a month, I think).
Comment

A really good option is the Transporter Sync - a $100 one-time option that behaves like Dropbox and is as secure as you want it to be... See: http://www.filetransporter.com/products/transporter-sync/

We're using Office 365/Sharepoint/OneDrive for Business at work, and is just seems FAR more fragile than either Dropbox or Google Drive. I've lost track of how many times I've had to "Repair" my shared folder i.e. have the client make a local copy and start syncing from scratch again. Good thing I've got fast internet at home.

When is this gonna be reflected in my account? I'm a pro user and only see my usual 100GB.
Comment

Dropbox's software is lightweight, its syncing is fast, and its developer APIs are more widely used than any other cloud service.

I have free cloud accounts with Dropbox, Box, OneDrive, Amazon Cloud Drive (and iCloud if you count that), and Dropbox is integrated into the most third party iOS apps, so it's thus the most convenient cloud storage for me to export my docs to via all the apps I use.