EA is telling owners of Rock Band for iPhone that as of May 31, the game will "no longer be playable on your device." Most users probably expect that a game they paid $4.99 for -- and that is still on sale, with no suggestion that the game will be useless in a month -- wouldn't suddenly stop working, especially when Rock Band offers a number of song packs as in-app purchases. 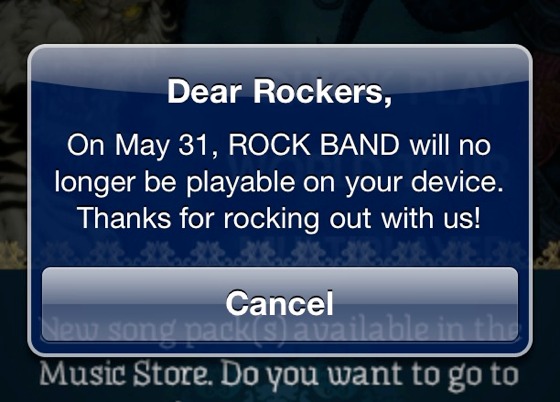 At the very least you would think that EA would be able to just leave the original Rock Band alone, so those who bought it and paid for IAP songs can continue to at least use it even if future updates aren't in the cards. Perhaps there's a reason for this, like a licensing issue with the music, but at any rate if you're still a fan of the first Rock Band on iOS you'll have until May 31st to continue enjoying it.

Servers being shut down and dropping support for games isn't a new phenomenon, but in the increasingly more digital age of video games you'll just have to keep in mind that the experience might be finite unlike physical copies of games which will last for eternity as long as you have the hardware to play it.
Click to expand...

Rock Band hasn't been updated since December of 2010, as its sequel, Rock Band Reloaded was released around the same time. EA's website for Rock Band for iPhone provides no indication that the game will be shut down.

Update: Polygon reports that EA has issued a statement claiming that the notification was sent in error.

"Rock Band for iOS will remain live - the in-app message users received yesterday was sent in error," the company said in a statement.

"We apologize for the confusion this caused. We're working to clarify the issue that caused the error and will share additional information as soon as possible."
Click to expand...

It is unclear exactly what the "error" was given that an EA support document had also briefly referred to Rock Band being shut down at the end of the month, but EA says that it will be providing more information on the situation.

Hardware is not finite? Tell that to my iPod Mini.

Unless they sold this software as a subscription, I don't see how it is legal.

This is ridiculous--EA, Ubisoft, and all the others that tie their games indefinitely to a server are crooks. Why do they have to treat customers who actually pay like crooks?

This is why EA is poison. I hate the fact they've adhered themselves to the big name games.

That's seriously not on. People paid for that software and IAP with the assumption they can use it on their device as they wish. I hope Apple get involved and give EA a kick up the ass

There's no official explanation for why they are doing this, but I'm going to take a wild guess and say it's a music licensing issue. This is very sad. They should at least refund users who bought the game or the in-game content. *sigh* I wish I could be surprised by this kind of thing, but this is EA. The same company that once shipped my game to Arizona instead of New Jersey and didn't think they did anything wrong.
R

"Great presentation Rob, but you aren't thinking outside the box. If you really want to screw them over, update the game so it becomes unplayable."
G

Any word on whether the customers will get refunded?

Businesses shouldn't be able to disguise services as products like this. Because when they decide to cancel the service - i.e. disable the product after sale, they rightfully expose themselves to a big fat class-action lawsuit. I hope they have the pants sued off them so nobody ever does this sort of thing again.

"Thanks for rocking out with us!". LOL

More like, thanks for the money, now go buy another one of our games, because you can't play this one anymore.
M

Exactly why EA Games is one of the most hated companies in the gaming industry. Practices like this, always make me think twice buying anything EA related.

That is so typical EA

Nice to see that their quality customer service now extends to iOS apps as well.

A guy could understand shutting down an MMO server after a bunch of years, or something like that. But shutting down authentication servers is annoying as hell... makes me wonder if I'll be able to replay the Mass Effect trilogy down the road if I feel like it or if I'd be stuck with ME and ME2

This is why I don't buy any games that require servers to function. If a game stores all content on the computer and a crack will allow it to install and run sans internet I may consider buying it, so far I haven't though as it isn't worth the hassle. Which is a shame really as I really wanted Assassins Creed 2 and would have bought it. Instead all I have played is Assassins Creed 1.

Also unplayable soon for people who buy it today... and tomorrow...

Will they keep on selling it even after May 31? Why not! Some people will ask for refunds, but the rest are pure profit!

Ask Apple: you might get one! (Customer Service link in the iTunes store.)
J

This is the exact reason why I hate having everything digital. If I buy a CD, DVD or Game in a shop, I can have that for as long as I want. If I buy digital I have no idea when someone is going to steal it off me.

velocityg4 said:
This is why I don't buy any games that require servers to function.
Click to expand...

I assume you're not talking about multiplayer games?

It's funny, some people online think that EA are better than what they used to be. Yet here they are taking away things you paid for.

Basically **** EA. I won't be buying any of their products from here on.

I'm asking for a refund for all my EA games on iOS.
L

Wow. I wanted SSX for my PS3, but I don't think I'll be buying it now.

who even plays this kind of **** anymore anyway? if they do, they need to experience real games!

This why I been encouraging people support game developers on kickstarter. There a lot of cool games up there that need a lot of support. Maybe MacRumors could start featuring some of them???