There are some major improvements to Siri in iOS 15, with Apple introducing features that iPhone users have long asked for. On devices with an A12 chip or later, Siri can do on-device processing and there's support for offline requests. 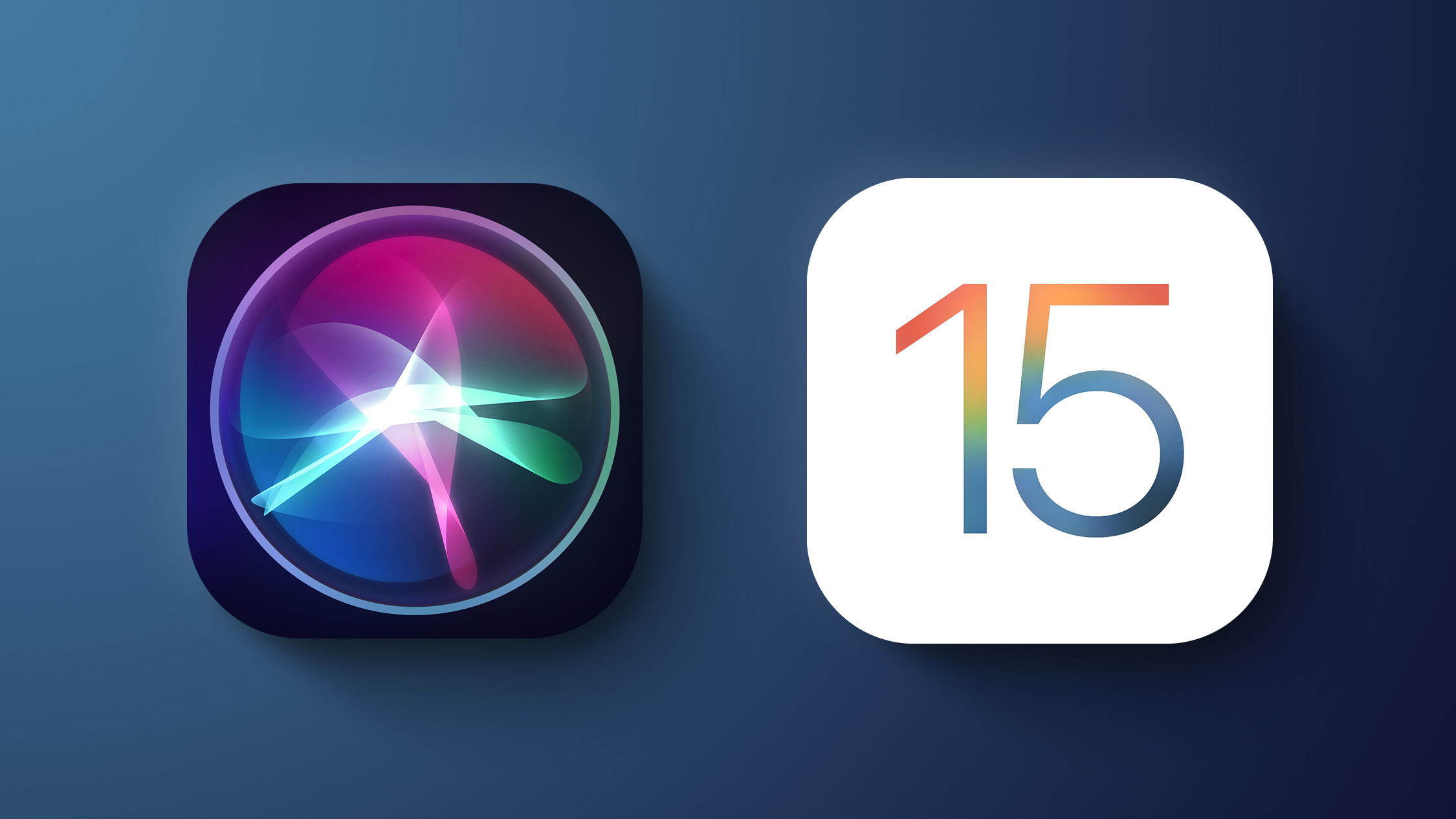 This guide highlights all of the new Siri features that are available in iOS (and iPadOS) 15.

Starting in iOS 15, speech processing and personalization are done on-device. This makes Siri faster at processing requests, but also more secure. Most audio requests made of Siri are kept entirely on the iPhone and are no longer uploaded to Apple's servers for processing.

Siri's speech recognition and understanding of commands improves as a device is used, with Siri learning the contacts most interacted with, new words typed, and topics preferred, with all of this information kept on device and private.

On-device speech processing and personalization is enabled through the Apple Neural Engine and it is available on iPhones and iPads that have an A12 Bionic chip or later.

With on-device processing now available, there are a wide range of Siri requests that can be handled offline. Siri can create (and disable) timers and alarms, launch apps, control audio playback, and access Settings options.

When you come across something that you want to share like a photo, web page, Apple Music song, or podcast, you can ask Siri to send it to a friend or family member and Siri will do so. 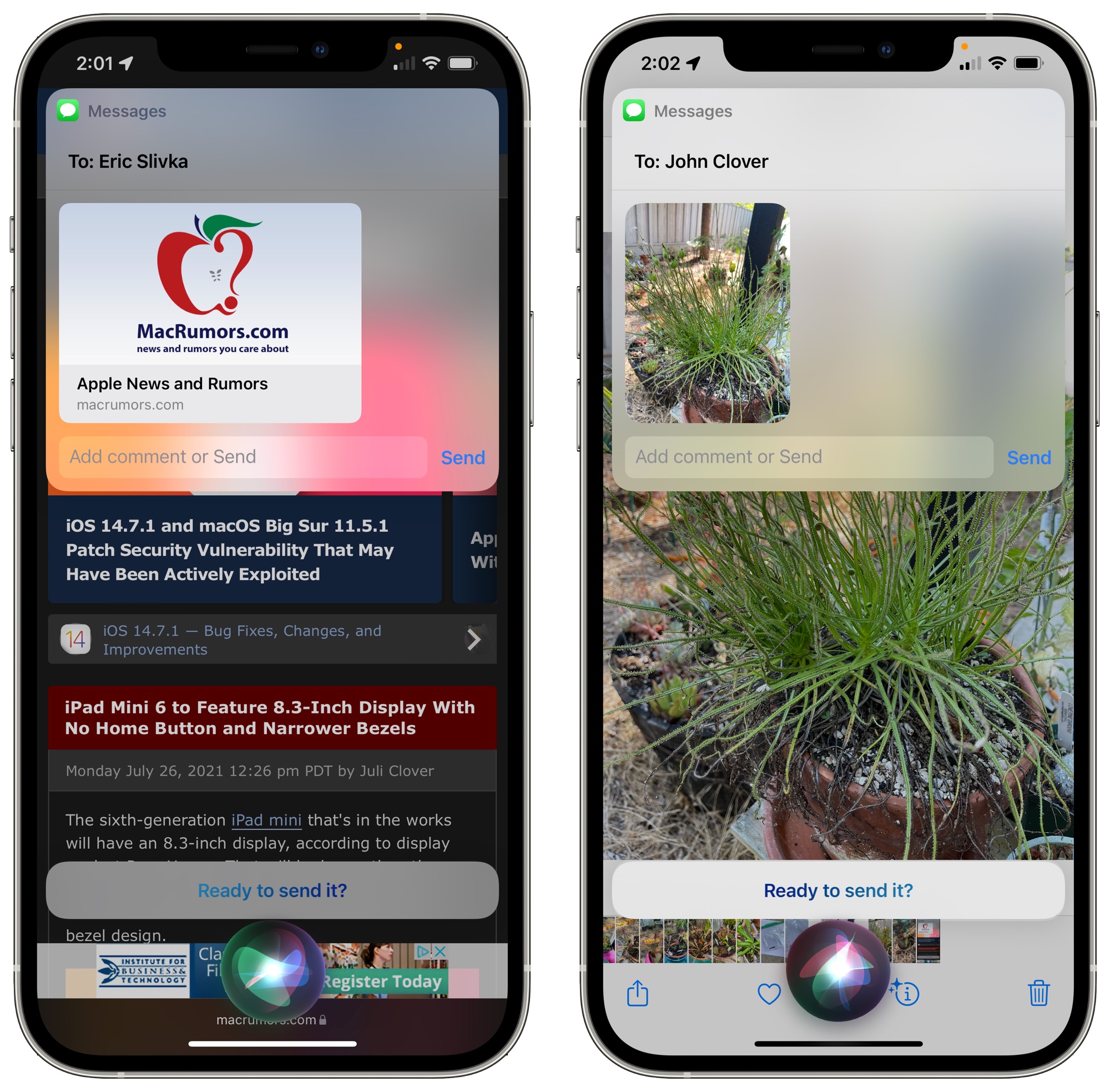 If it's something that can't be shared, like a Messages thread, Siri will make a screenshot and send that. All you have to do is say "Send this to [person]" and Siri will confirm the request and then send it along. 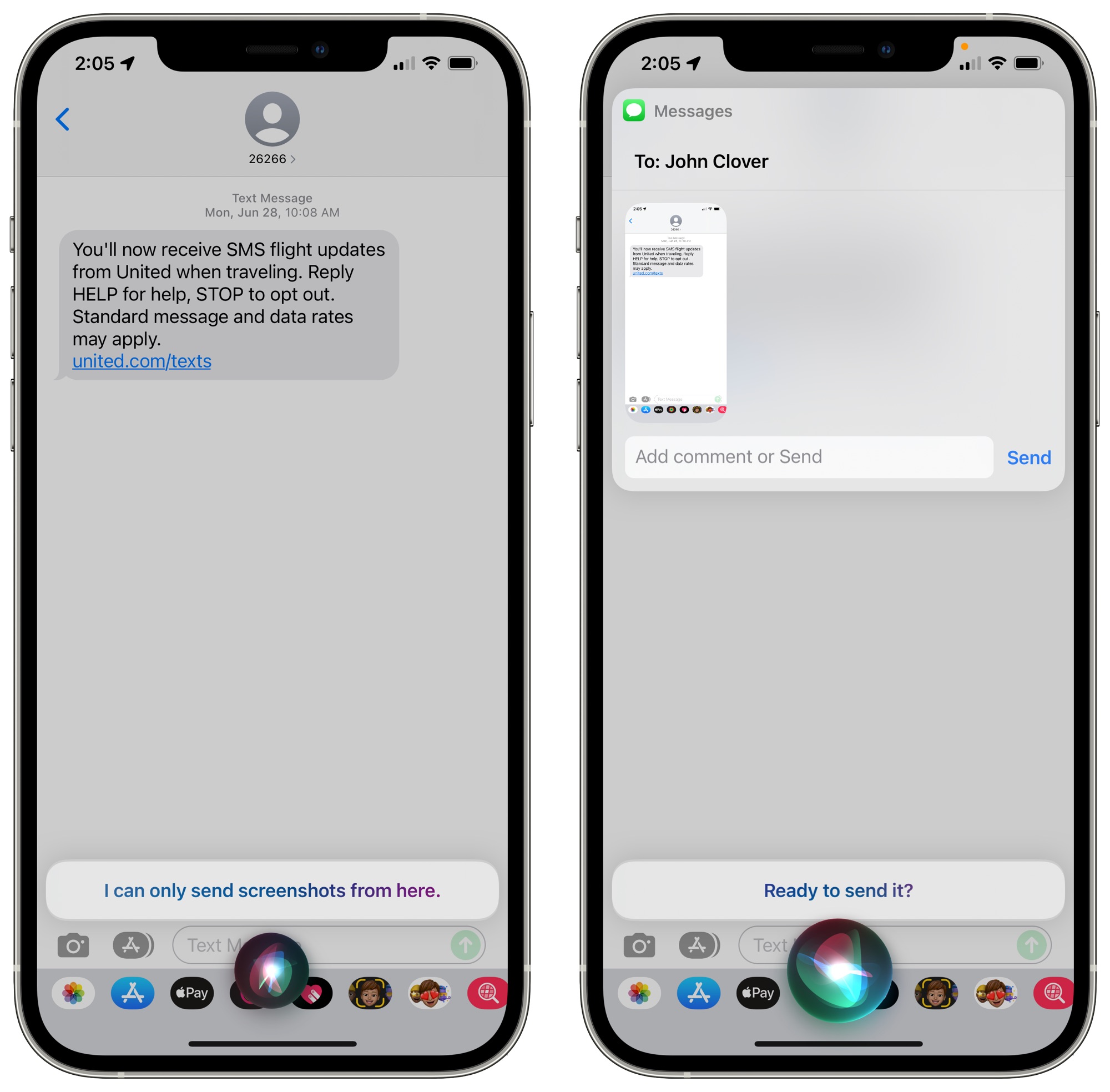 Siri in iOS 15 can better maintain context between voice requests. So if you ask something like "How late is the Taco Bell open?" and then "How long does it take to get there?" Siri will understand that "there" is the Taco Bell from the previous request. 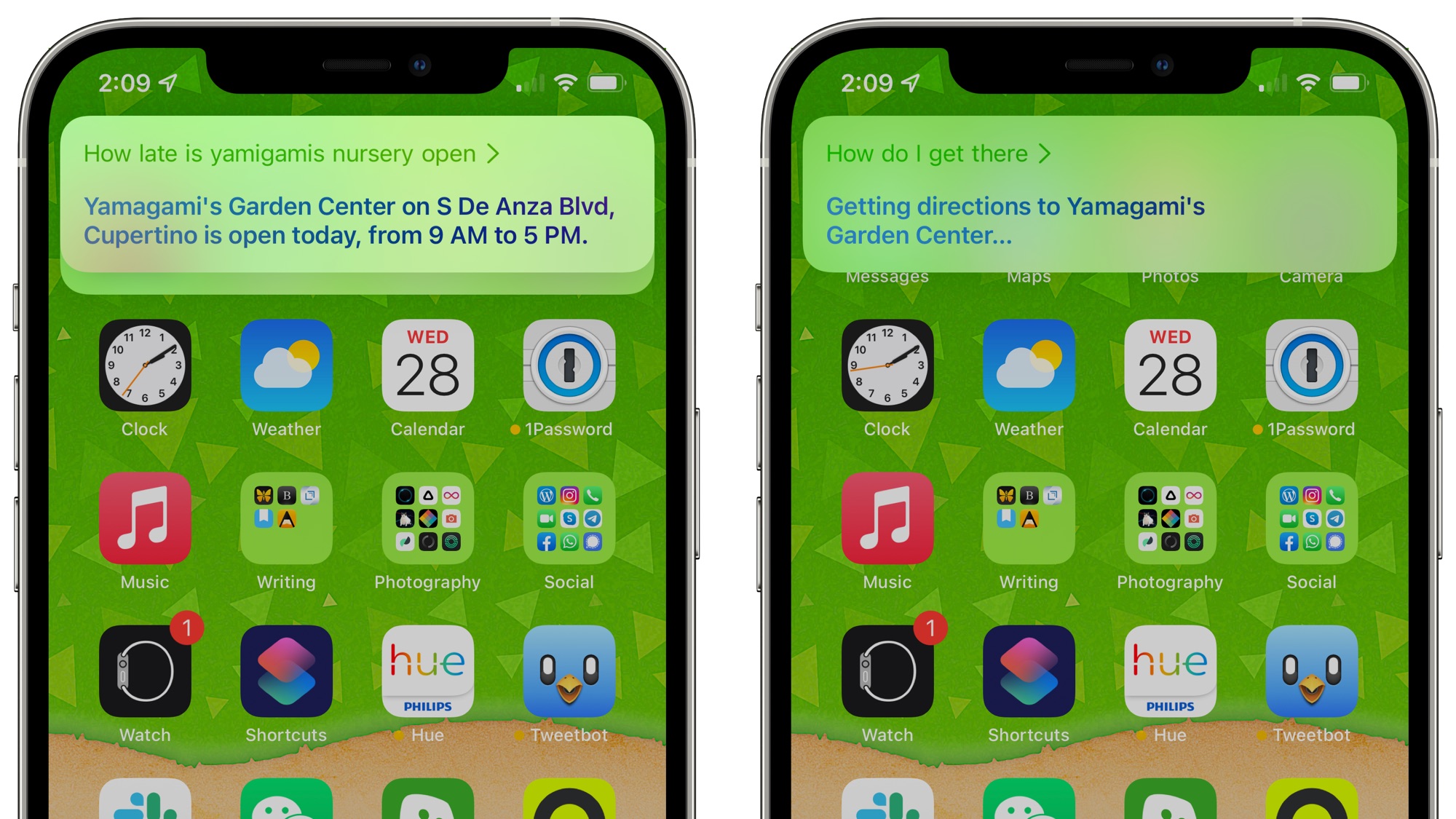 This tends to work only when there's a single option, because in a situation with multiple Taco Bells, Siri needs clarification. For that reason, the contextual improvements are limited.

Siri also understands that if there's a contact on the screen, that's the person that you want to talk to.

So if you have the contacts app open to a specific person, are chatting with someone in Messages, get a Message notification, or miss a call, you can say something like "Message them I'm on my way" and Siri will know to send it to the relevant contact that you've just interacted with or have open. 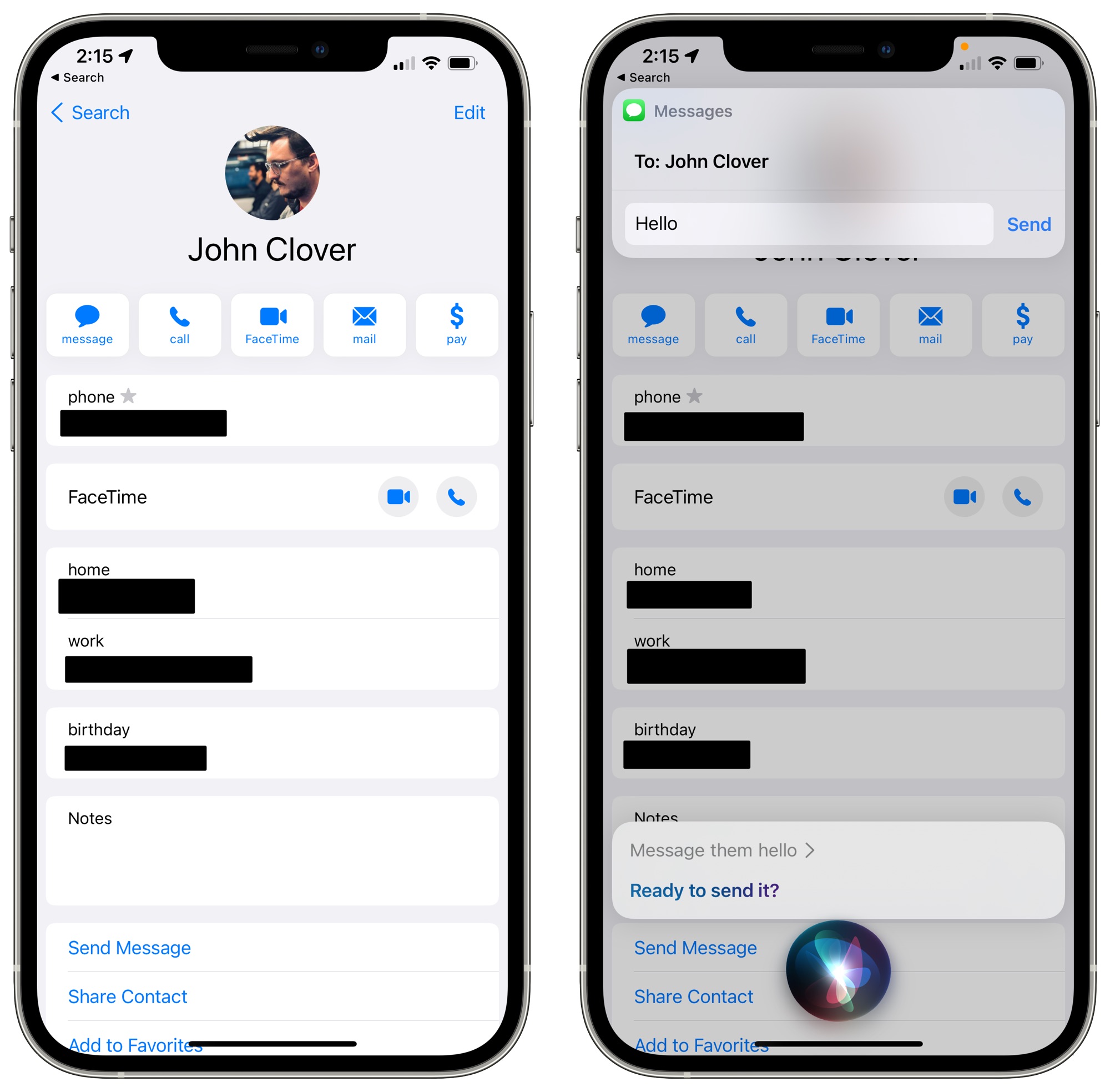 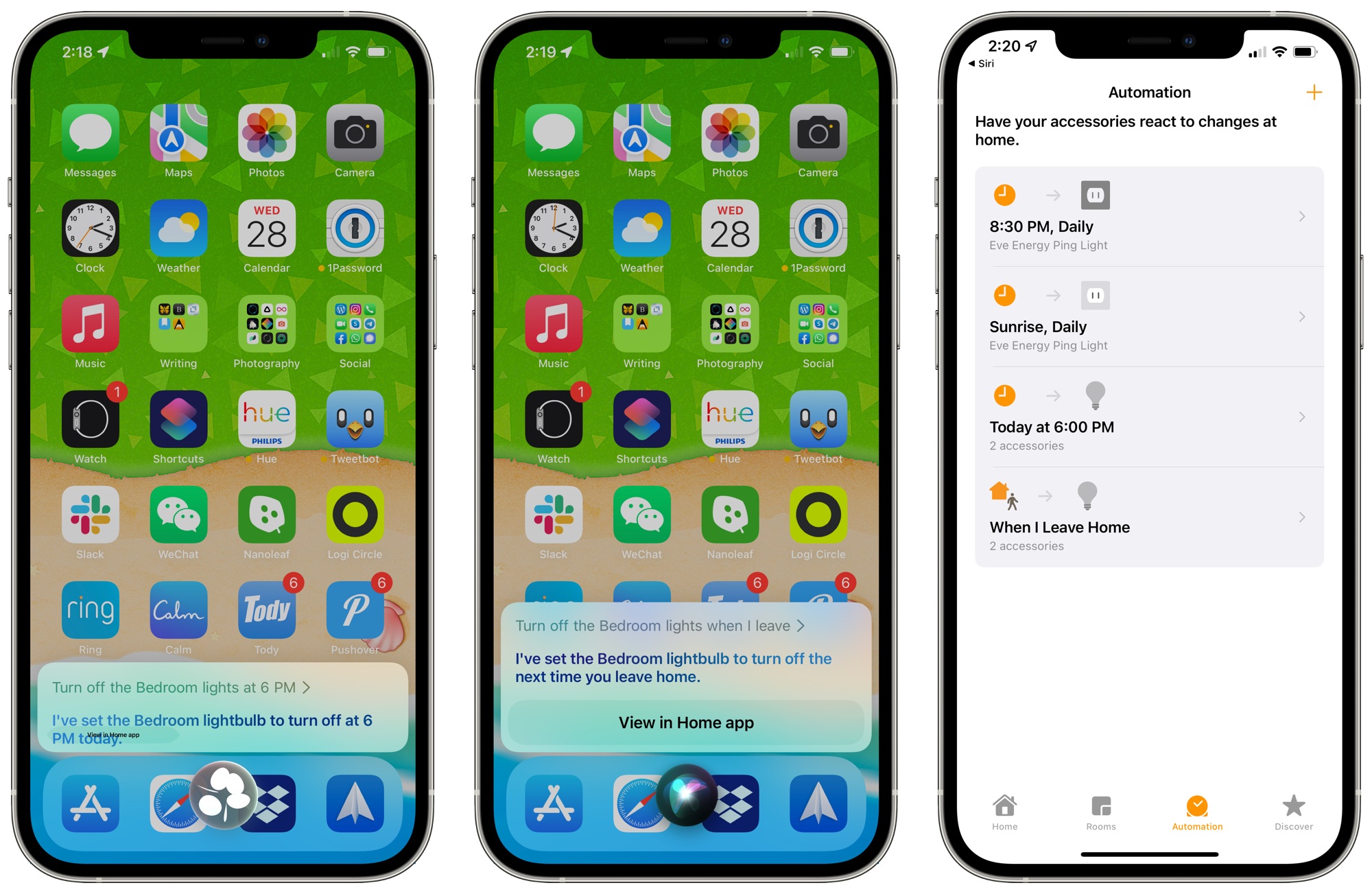 When you ask Siri to control a HomeKit product this way, it creates an automation in the Home app under the "Automation" section. If you want to delete an Automation Siri has created, you can do so in the Home app.

HomeKit developers can also add Siri support to their products in iOS 15, but using Siri commands with third-party devices does require the user to have a HomePod to route requests through. With Siri integration, customers will be able to use their HomeKit products for Siri commands like setting reminders, controlling devices, broadcasting messages, and more.

Siri has been able to announce calls and incoming messages when using AirPods (or Beats headphones) for some time now, but in iOS 15, that feature is expanding to all notifications. 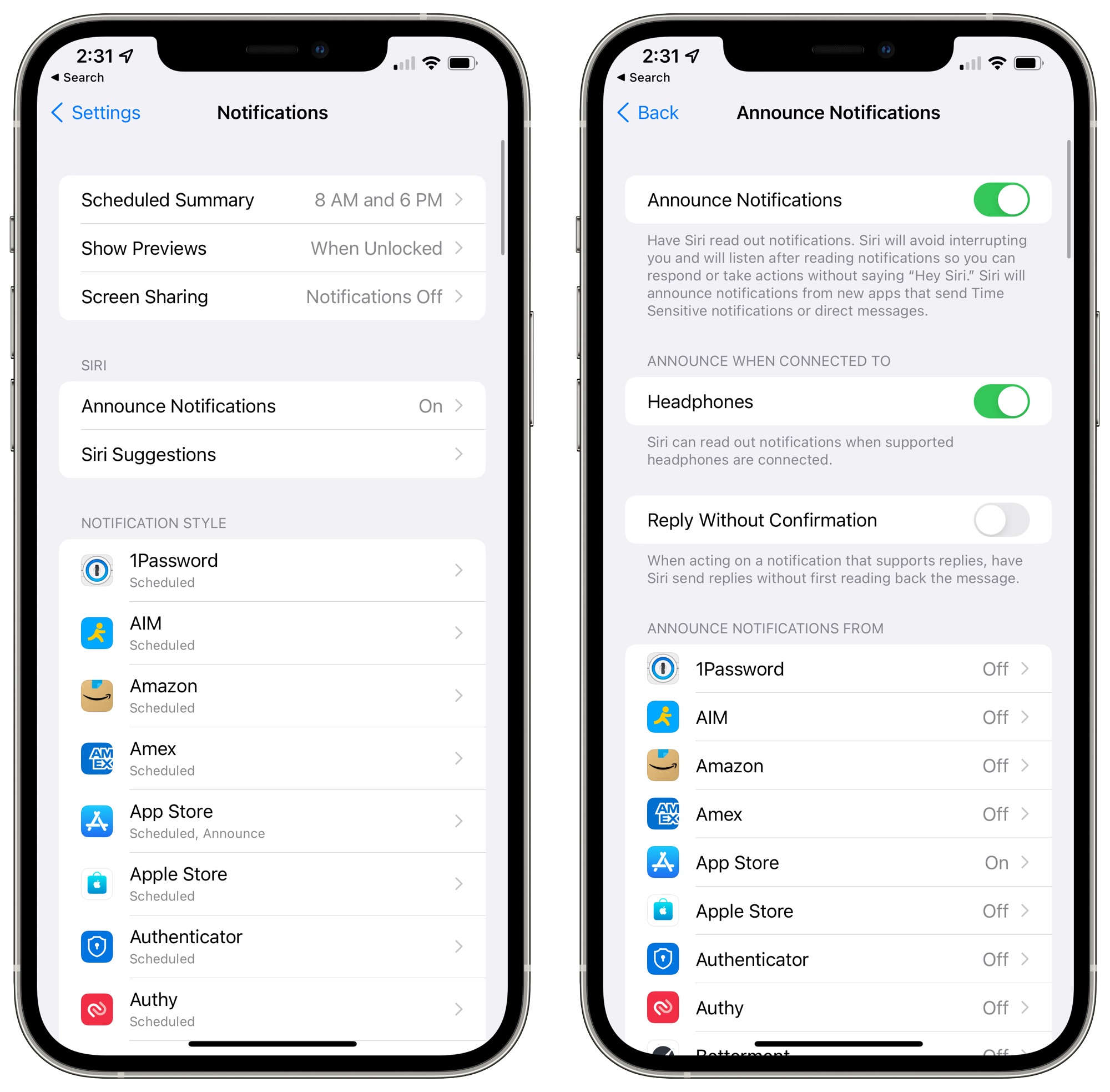 There's now a feature to have Siri announce your incoming messages when your iPhone is connected to a CarPlay setup.

There's an option to turn announcements on or off when a message is read, and Siri will remember your preference. This feature can also be toggled on or off using the Settings app.

In addition to notifications, Siri can also announced reminders that come up when wearing AirPods or compatible Beats headphones. 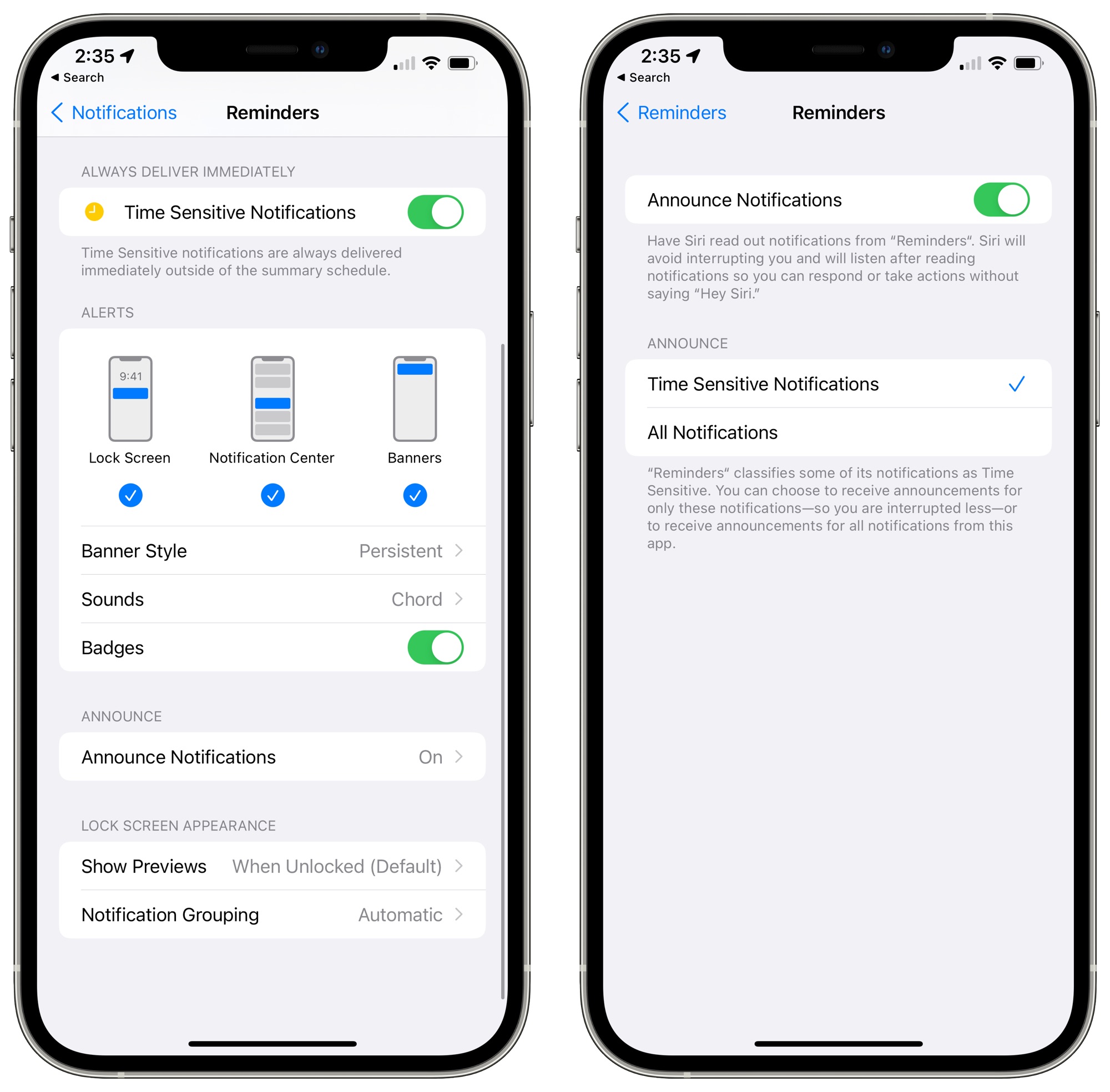 Neural text-to-speech voices have expanded to Swedish, Danish, Norwegian, and Finnish in iOS 15.

Apple is tweaking its SiriKit interface and is eliminating some of the Siri commands that developers were able to use with third-party apps.

Starting with iOS 15, customers will no longer be able to use Siri in third-party apps to do things like book a ride with Uber, make a bill payment, or create new task lists in to-do apps. Many of these Siri functions may be replaced by Shortcut options that can be activated with Siri voice commands.

Have questions about Siri in iOS 15, know of a feature we left out, or want to offer feedback on this guide? Send us an email here.

It is so intelligent.
Reactions: attila, hxlover904, Rafagon and 2 others
Comment

For better or for worse, it will be a decade this year since Siri first launched on the iPhone.
Reactions: motulist, amartinez1660 and maxfromdenmark
Comment
D

Honestly, this is one of the most exciting features in iOS 15. Offline Siri, improved context, and especially the "announce notifications" feature.
Reactions: amartinez1660, ZZ9pluralZalpha, seek3r and 5 others
Comment

This is huge, starting to be really cool imo

the next thing that needs improvements is the translate app which is almost not usable, interface not friendly at all I mean come on it is really bad apple if you read me.

And also a feature I have been asking for around 10years is the ability to play music in a Bluetooth speaker AND record a video at the same time. WHY THE HELL DOES THE MUSIC STOPS.
Sorry but it feels good to shout it once in a while.
Reactions: TVreporter
Comment
P

twocents said:
For better or for worse, it will be a decade this year since Siri first launched on the iPhone.
Click to expand...

The other day I happened to watch the keynote when it was introduced back then.

It was actually really fun and surprising to watch, to see all it was able to do back then already, and how it... hasn't really evolved in a decade.
Reactions: motulist, amartinez1660, Scottsoapbox and 12 others
Comment
P

The weakest product/service in apples lineup by far.
Reactions: motulist, hagar, attila and 11 others
Comment

Useless for me since Siri is still not able to handle more than one language at a time. You should hear my incoming messages in Spanish or English when my iPhone is set to German. It’s hilarious
Reactions: joecomo, t1meless1nf1n1t, hagar and 3 others
Comment
S

"Apple is tweaking its SiriKit interface and is eliminating some of the ‌Siri‌ commands that developers were able to use with third-party apps."

"Starting with ‌iOS 15‌, customers will no longer be able to use ‌Siri‌ in third-party apps to do things like book a ride with Uber, make a bill payment, or create new task lists in to-do apps. Many of these ‌Siri‌ functions may be replaced by Shortcut options that can be activated with ‌Siri‌ voice commands."

Anybody know why this is and / or how this will affect 3rd party apps working integrated with Siri?
Reactions: motulist, peanuts_of_pathos and Antes
Comment

The device category that really cries for on-device Siri is HomePod. Unfortunately, this feature requires A12 or newer. HomePod's A8 is obviously far older than A12. HomePod mini's S5 has two of A12's energy efficient cores and neural engine. So there's a chance.
Reactions: peanuts_of_pathos, GregoriusM, Jason216 and 1 other person
Comment

Siri is pure SH!
How about getting it to work so its worth using first!
Reactions: Flight Plan, hagar, J.J. Sefton and 7 others
Comment
M

PsykX said:
The other day I happened to watch the keynote when it was introduced back then.

It was actually really fun and surprising to watch, to see all it was able to do back then already, and how it... hasn't really evolved in a decade.
Click to expand...

Wow, I think you're right. In fact, it's dumber than the original version of Siri.

I think they took out the wolfram alpha api. In the demo, Scott mentioned that you can ask it how many days until your birthday and when I tried that just now, it only tells me when my birthday is but not the number of days until my birthday.
Reactions: motulist, llirik, somethingelsefl and 13 others
Comment

Now fix the HomePod mini every time I ask it something it says waiting waiting then does it
Reactions: llirik, peanuts_of_pathos and TVreporter
Comment
D

There's one suggestion I have made before and would love to see - seems easy. If I'm sending a text via Siri to a contact, and I mention that persons name in the text, it would be great if Siri relied on the spelling of the name from the contact. For example, if I'm texting someone named "Erik" and I want to text (via Siri), "Hey Erik, did you see that reveal on last night's show?"... Siri will spell out the text as "Hey Eric, did you see that reveal on last night's show?" Would be great since in this example I'm texting a contact named "Erik" if Siri had the logic to take the spelling from the contact.
Reactions: Lerenard3000, llirik, mcouture13 and 12 others
Comment
M

I was hoping this would work with downloaded music on Apple Music. I cannot count how many times i have had bad cellular and Siri cannot load local music. Unfortunately, it does not work.
Reactions: hagar, peanuts_of_pathos, GregoriusM and 2 others
Comment

One HomeKit feature I'm waiting for is multi-user-aware home/away settings.

Right now, I have it time-schedule: 64-72 degrees overnight, 66-70 degrees for the couple hours she's up in the morning before leaving for work, 64-76 degrees during the time she's at work (I work from home, and that's my acceptable range,) and 66-70 again for the time she gets home from work until her bed time.

PsykX said:
The other day I happened to watch the keynote when it was introduced back then.

It was actually really fun and surprising to watch, to see all it was able to do back then already, and how it... hasn't really evolved in a decade.
Click to expand...

Has it left beta since then?
Reactions: Klososky, cableguy84, hamburg040 and 1 other person
Comment

I had no idea. Pretty neat.
Reactions: amartinez1660, Rafagon and peanuts_of_pathos
Comment

Of course, there is a lot to improve about Siri. The lack of multilingualism worldwide (don't even the Spanish-speaking population in America have any problems with that?) or the way you have to adapt to Siri's understanding. But the path to the better is certainly difficult here, is continuously followed by Apple, and to grumble about it is something destructive that children do who can not stand the complexity of the world.

I am happy about the anchoring on the device, certainly similar to what customers in China do. This increased privacy protection and accelerated responsiveness is probably only possible because Apple can now develop its processors for it.

Hey Siri! Turn on the coffee.

"I'm sorry the Number 10 is not responding."
Reactions: jdawgnoonan and Antes
Comment

So can you say, "Hey Siri, share my location with" one of your iMessge contacts? I know you could not do that a year ago.
Reactions: peanuts_of_pathos and GregoriusM
Comment

If it works as described then I’ll be impressed.
Reactions: amartinez1660, peanuts_of_pathos, GregoriusM and 1 other person
Comment

Can someone please confirm this, if I use Siri now with voice controls will it not send my voice to Apple for them to analyze and store in their servers? How does this work for a query like:-

"Who was the 10th president of the United States of America?"