Eight years after separating its Messenger service into a standalone app, and five years after removing messaging functionality completely from the central app, Facebook might be gearing up to reintegrate Messenger into the main Facebook app (via The Verge).

The news comes from app researcher Jane Manchun Wong, who found a rudimentary "Chats" section in the Facebook mobile app. Whereas before the Messenger button would cause you to leave Facebook and open the Messenger app, Wong discovered that Facebook appears to be testing a new "Chats" area in the app. As of now, this area only contains basic chat functionalities, and lacks reactions, call support, photo support, and more. 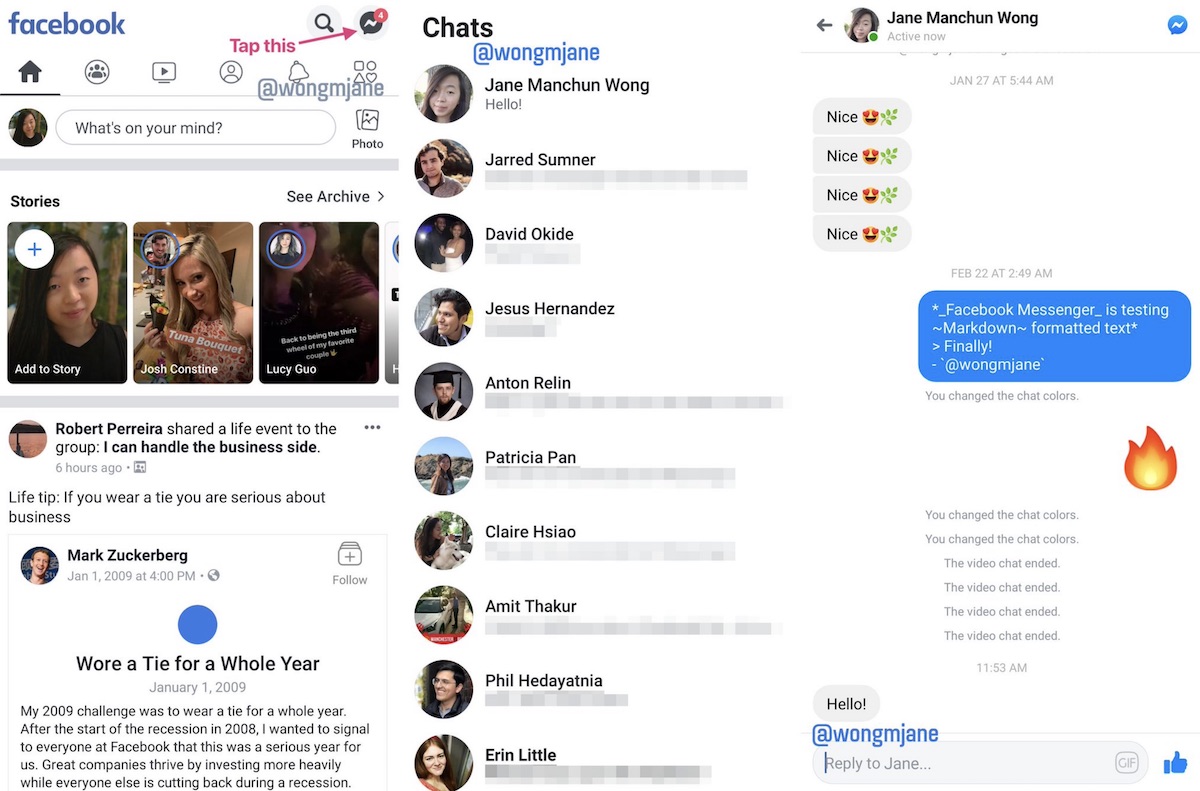 Facebook is bringing the Chats back to the app for preparing integrated messagingTip @Techmeme pic.twitter.com/LABK7qrk0e - Jane Manchun Wong (@wongmjane) April 12, 2019
Click to expand...

The change follows news that Facebook CEO Mark Zuckerberg wants to integrate the company's three messaging services -- Facebook Messenger, Instagram messaging, and WhatsApp -- into one "underlying messaging infrastructure." Each app will continue to exist following this update, but they will become interoperable so that a Facebook user can send an encrypted message to a WhatsApp user, and vice versa.

According to Wong, this means that Facebook will also keep the separate Messenger app around even after it adds chat functionality back into the main Facebook app, because they will "serve different markets."

All of the Facebook messaging services integration is believed to be an effort to keep people within the Facebook ecosystem and away from rival texting apps like Apple's iMessage.

Update: Facebook has provided MacRumors with the following statement: "We are testing ways to improve the messaging experience for people within the Facebook app. Messenger remains a feature-rich, stand-alone messaging app with over a billion people using it monthly to connect with the people and businesses they care about most. We do not have any additional details to share at this time."

Definitely in an attempt to push more people into using Facebook and Messenger instead of just stand alone messenger... Just keep scrolling
Reactions: EyeTack, jeremiah256, martyjmclean and 8 others
M

Not sure if that will be great fun from a reachability standpoint if it happens.
Reactions: martyjmclean, omglolbbq and DBZmusicboy01
E

I don’t use it either way but why is every developer making their app all white? Looks horrible. Add some colour to the app (like the new outlook app)
Reactions: martyjmclean, Foxglove9, TVreporter and 1 other person

I've already uninstalled the main FB app on my iphone, gives me an excuse to uninstall FB messenger.
Reactions: martyjmclean, Benjamid, itsamacthing and 10 others

I hardly use FB anymore, but on occasion I do use FB messenger since people do contact me through that.

If FB decides to merge messenger back into the main app, that guarantees I won't be logging in.
Reactions: Biu_miu, Benjamid, EyeTack and 4 others

I wouldn’t put too much thought into that. They moved it to the bottom for that exact reason when the iPhone X came out.
C

Desperat attempt to save main Facebook site and app.
Their company is big they have no clue what to do anymore
Reactions: martyjmclean
H

I disabled my FB account and deleted the app a while back, and it told me that I can still use Messenger which has actually been quite helpful. If they force me to use the main app and have an active account instead of a standalone one then I will fully delete it. There is nothing there worth keeping.
Reactions: martyjmclean and 480951

I’ve attempted to leave FB many times. Yet businesses & many other people & services direct you to their FB page for more info. I find it handicaps me not to be on it. That said, I use Firefox w/ their container activated to limit my exposure. I rarely post, I have almost no personal info on my page, & no current posts on my page. It’s simply a resource.
Reactions: hagar

That's how it's laid out on robotphones. Not that exact design, mind you, but with navigation at the top. It's horrid.

Apparently green bubble peasants aren't dexterous enough to be able to interact with the GUI without triggering their precious bottom buttons.
Reactions: martyjmclean and Beachguy

Does not work that way on my iPhone.
E

The whole screen might be swipe-able to move between tabs, which would be the only way this makes sense. But yeah, I agree, this is suspect.
L

Yup. I only have Messenger installed on my phone. The Facebook app would regularly cache 500+ MB of garbage without an option to clear it.
Reactions: pippox0

H3LL5P4WN said:
That's how it's laid out on robotphones. Not that exact design, mind you, but with navigation at the top. It's horrid.

Apparently green bubble peasants aren't dexterous enough to be able to interact with the GUI without triggering their precious bottom buttons.
Click to expand...

Come on over, the water is fine!
Reactions: hagar

Just when will this cancer cell of human kinds simply die off?
Reactions: martyjmclean, Cameroncafe10a, justperry and 5 others

I have always refused to install the Messenger app as I resented Facebook deciding to try to force the installation of a second app. Today, I don’t even install Facebook on my phone; I just use the web site.
Reactions: EyeTack

I said at the time making messages it’s own app would be a bad idea. I don’t use Facebook anymore but I keep the Messenger App because I have family members who, for whatever reason, refuse to just send a text or group text message. One of them works for Google. You’d think he would know better. LOL!!!
D