Around a month after Facebook began quietly merging its Messenger service with Instagram direct messaging, the transition has been officially launched, with a full rollout to all users soon to follow. 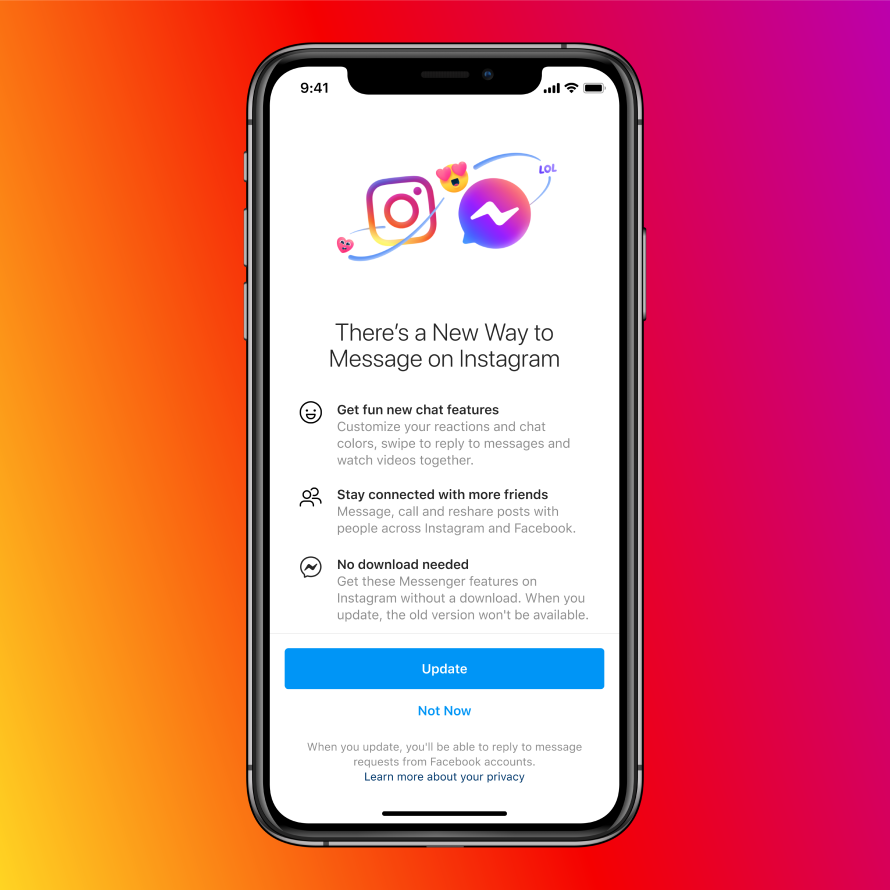 As a result of the merging of the chat services, Instagram users can chat with Facebook users and vice versa using the same platform. Features previously only available on Facebook Messenger can now be accessed in Instagram, including colorful chats, more emoji reactions, and swipe-to-reply. In addition, the regular paper airplane DM icon in the top-right corner of the Instagram UI has been replaced by the Facebook Messenger logo.

The company hopes that unifying its messaging infrastructure will help to keep its billions of users engaged in the Facebook ecosystem, in an attempt to ward off rival messaging services such as Apple's iMessage.

Last week, Facebook began lobbying Apple for an option to make its Messenger service the default messaging app on iOS, arguing that now users can select a third-party app as the default browser and email app, it is unfair to exclude messaging apps.

If I’m Facebook I wouldn’t want my spy algorithms having to work on two different apps. Makes sense to unify them.
Reactions: TakeshimaIslands, Cleartz, ikir and 19 others

ah, i see why zuckerberg was so keen on making their messenger default on ios...
Reactions: TakeshimaIslands, msp3, Nica and 2 others
D

If they merge WhatsApp then I’m done
Reactions: MHenr, TakeshimaIslands, GlassFingers and 12 others

Deleted Instagram yesterday and Facebook has been gone for months. It took a bit of time to adjust (literally found myself opening my phone and swiping on the Home Screen pages mindlessly then locking it again.. scary how addicted you can get to your phone).

It feels so refreshing to get out of social media. I have so much more time in my day now.
Reactions: r_mack, Stonefly, d3n and 40 others

That's why the founders of Instagram and WhatsApp left (or were they let go?!)... Good intentions gone awry
Reactions: Jovijoker, Oblivious.Robot, Solo_Photo and 2 others

The empire is consolidating itself.
Reactions: ikir, Vanilla35, flur and 4 others

Of which I have neither.
Reactions: remington79, ikir, Jovijoker and 1 other person
S

Would be interesting to see how 'focus on privacy' plays out. I think Facebook, in its current form or otherwise, is here to stay so we might as well try to figure out a way to best utilise this piece of technology. I for one don't have facebook or instagram (deleted them some 6 months ago) but I know it has potential for a lot of good.
Reactions: Nica, Dj64Mk7, Okasian and 1 other person
D

That is their long-term plan. But making that happen will be difficult because of WhatsApp's end-to-end encryption.
Reactions: Nica, Jovijoker and George Dawes
C

The guy who sold WhatsApp for 22 billion dollars and after he had more money than he could ever possible spend decided to take a moral stand? He took his pay check and should’ve known what he got into.
Reactions: msp3, Nica and philrock

What were their intentions?
Reactions: Nica, Jovijoker and TheDemogordon
D

The WA guys left because of pressure to include advertisements. Overall I'd say Facebook is bad, but one silver lining is that WA has the "Signal Protocol" for its E2E encryption. That is a huge plus for privacy, considering how many people it now covers given the huge user base. Its no small thing when you consider many countries around the world will round up people who disagree with the government. Now these people can communicate with family and journalists safely. The downside is that Facebook will try to monetize your metadata. FB can't read the content of your WA messages, but can still tell alot about you based on your contact list and who/when you communicate with.
Reactions: Nica, Jovijoker, Dj64Mk7 and 1 other person

Same here. I get why they are insisting on this but I don´t see it as a good thing for the customer at all.

I hate this move. I use Facebook to keep in touch with many friends, colleagues and academicians abroad but I post nothing on it, only one picture and that's it, I don't want to be forced to use it, I dislike Messenger.

I have Instagram because it helps my business and I do like the app. And I use WhatsApp simply because it is ubiquitous and everybody (outside of the US) has it.
Reactions: TakeshimaIslands and Jovijoker

Well, that's the plan Zuckerberg set up in 2019, as seen in this NY Times article.

I massively distrust Facebook but I do use Instagram, hypocrite that I am. The more they force "Facebook" down my throat as an IG user the more I realise that I can't pretend that it's not part of their ecosystem. I see the day approaching when I'll be, reluctantly, deleting IG.
Reactions: ipedro, TakeshimaIslands, sideshowuniqueuser and 6 others

why y'all whinging. you can opt out. it's optional.
Reactions: bLackjackj and Dj64Mk7

Not at all happy with this. No desire whatsoever to have those worlds merged.
Reactions: GlassFingers

Is it selling the user data from three apps for the price of one?
Reactions: TakeshimaIslands and Jovijoker

Forcing intentionally separate accounts together is NOT a move toward user privacy. It’s a move toward better data collection.
Reactions: Anilu7, GlassFingers, remington79 and 4 others

May lead to depression, anxiety, lack of self-esteem, social manipulation, privacy violation and deceit, but so do bicycles.

That’s not very transparent from the advantages they mention on that screen! sneaky if anything.

also what about WhatsApp? Didnt the EU only agree to the acquisition by FB back in the day if they kept WhatsApp data away from FB?