TechCrunch has posted an extensive gallery of screenshots from Facebook's long anticipated native iPad app. It turns out the latest update to Facebook's native iPhone application also included the resources for the iPad app.

@AeroEchelon first noticed and posted the first screenshots of the app to Twitter. 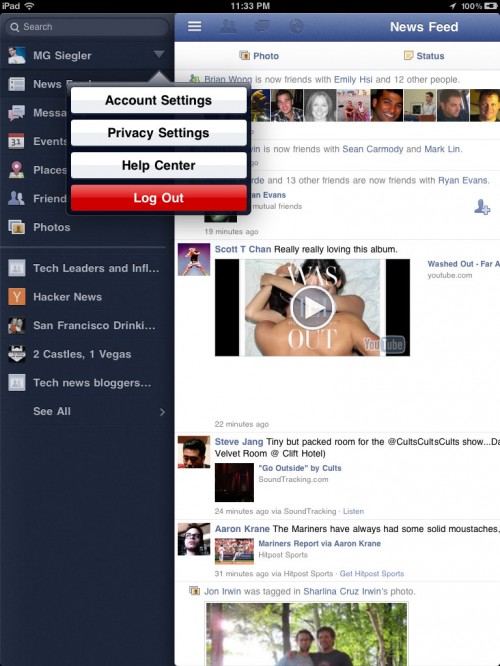 TechCrunch's MG Siegler found the app to be quite good even in its non-public release form:

The app also makes great use of the pop-overs (overlay menus) found in other iPad apps. When you flip the iPad horizontally, the list of your online friends appears and you can chat with them as you do other things on Facebook. The photo-viewer aspect looks great -- similar to the iPad's own native Photos app. Places exists with a nice big map to show you all your friends around you. Etc.
Click to expand...

Facebook is said to be launching this native app shortly. Facebook's own native iPhone app has been consistently in the top Free apps on Apple's App Store. The company has not yet released an iPad version of their app, though the demand has been clear as 3rd party Facebook apps such as MyPad have consistently ranked in the iPad bestsellers since the iPad's launch.

no offence, but it HAD to be MG to discover something like this

Apps are always a lot better for iPad .. Damn.

Before making even more app versions could facebook focus on making a version of their iPhone app that isn't saturated in bugs? Every release they do seems to fix 5 bugs but adds 10 more.

They need to fix the iPhone version first!

I deleted off my phone last week because it is such a waste of space. Notifications, search and text input barely work as it is. So what use does it have?
I

Yeah, the iPhone app is bad but I have to use because there are no alternatives (and don't suggest the mobile version: it sucks). They really need to just make massive changes to it.

Oh, well this is brilliant. it incorporates the best things from various Facebook iPad apps.
it's wonderful, but i think things like group docks and better support for things like that would be good. i know a few people who use group docs who would love that on their iPad.

I don't mind their iPhone app much, honestly. Have you ever used the Google+ iPhone app? Now THAT is a horrible app.

I have about 50 Apps on my iPhone and Facebook is THE worst one.
N

The official Facebook account for the Facebook iPhone App had posted the other day that the newest version of the app was available in the App Store. However, in the post, they referred to the App as for "iPhone, iPod touch, and iPad," despite it not actually being a native iPad app. I called them out on this and they haven't responded, but after seeing that there is an iPad app buried in the latest version, I'm guessing they planned on releasing a universal app this time, but changed their mind last minute. Some associated marketing announcements probably weren't revised in time NOT to mention iPad.

I have a feeling we'll be seeing a version 3.5 or maybe even a jump to 4.0 shortly, with iPad support activated.
V

The Facebook iPhone app is terrible. If the iPad app is anything like that, expect nothing short of frustration.
B

DavidLeblond said:
I don't mind their iPhone app much, honestly. Have you ever used the Google+ iPhone app? Now THAT is a horrible app.
Click to expand...

I'll have to take your word for it. I'm yet to have it load the stream and not crash...

BillyBobBongo said:
I know, this had me wondering too. I'm now racking my brain for offensive four letter words beginning with 'w' to complete that sentence...but I don't find any of them to be particularly offensive.
Click to expand...

If you're British you will know
P

Good, I'm glad it leaked. Something so dumb, that is so sought after, should have its parade rained on.

Not looking forward to it in the slightest.

The iPhone App is one of the worst apps ever created. It was useable when it first came out. But Facebook have a tendency to ruin everything after an update.
R

Shame I'm away from my iPad for a week or so, been waiting for this for so long. Been trying to use Friendly but I always fine myself coming back to the Mobile site.
Last edited by a moderator: Jul 25, 2011
B

At least we know it exists!

Looking forward to this!

Why is everybody complaining about the iPhone app...what's wrong with it? what bugs?

For me it seems to be one of the best apps on the iPhone....

It actually works very well. I think from now on I'll use it instead of accessing the Facebook website via Safari.

It's a very nice app, much better than their horrible iPhone app.
B

kirky29 said:
Looking forward to this!

Why is everybody complaining about the iPhone app...what's wrong with it? what bugs?

For me it seems to be one of the best apps on the iPhone....
Click to expand...

buckyballs said:
I'll have to take your word for it. I'm yet to have it load the stream and not crash...
Click to expand...

With the exception of push notifications and the ability to upload photos, it's pretty much a web frame around the crappy web app.

striker33 said:
Not looking forward to it in the slightest.

The iPhone App is one of the worst apps ever created. It was useable when it first came out. But Facebook have a tendency to ruin everything after an update.
Click to expand...

This type of hyperbole has always amused me. I have no idea what you are talking about. The Facebook app has always been perfectly usable for me. I'd even call it quite decent. The only complaint I have is the bugs, which have almost always been present in some form.