Popular gaming firm Feral Interactive made a brief debut on the Mac App Store at the marketplace's launch earlier this month, offering its LEGO Harry Potter title for a very brief time before pulling the application, apparently due to issues with file corruption possibly related to the large download size. But Feral is now back in the Mac App Store in a big way: Besides restoring LEGO Harry Potter Years 1-4 to the store, the company has also rolled out three other titles, including BioShock, Borderlands, and Rome: Total War. 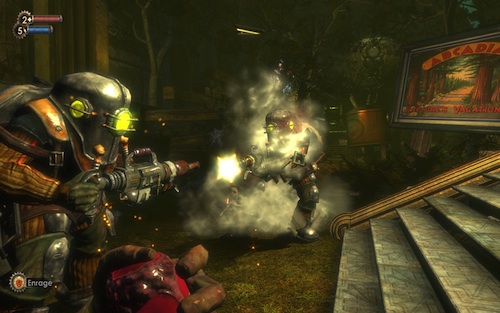 BioShock
BioShock, the popular first-persion shooter game that originally debuted for Mac in late 2007, has been ranked among the top gaming titles of the last few years by numerous outlets. The game is priced at $39.99 on the Mac App Store.

Set in an alternate 1960, BioShock places you in the middle of an underwater utopia gone badly wrong. With a provocative and intelligent storyline, this is a game that is alternately beautiful, thrilling, funny, frightening and always involving. An experience that makes you think while you play.
Click to expand...

Borderlands, another science fiction-themed first-person shooter, was only released on the Mac platform last month, coming in a "Game of the Year" edition with bonus content included. That expanded edition is now also available through the Mac App Store, priced at $49.99.

Finally, Feral has released Rome: Total War ($29.99), a strategy game available in a "Gold Edition" that also includes the Barbarian Invasion expansion pack for the original game. And of course LEGO Harry Potter Years 1-4 is now back in the Mac App Store at the same $49.99 price point at which it originally appeared.

Feral is not the only big-name Mac game developer to start bringing its titles to the Mac App Store, as Aspyr Media earlier this month launched Call of Duty 4: Modern Warfare and Civilization IV: Colonization, the first of what is expected to a significant number of Aspyr titles to make their way to the Mac App Store.

Excellent! Great quality games. I hope they sell well to encourage other developers to take advantage of such an easy distribution channel.

This'll grab a lot of people who don't have Steam already.

All it is, is price gauging for old games that are inferior cider ports. They aren't even native, just a windows exe in a wrapper with a performance loss. It's a joke. If people want games then they should just use Windows with DirectX which is built with games in mind, that way you get the wider range of titles with proper performance and driver support.

Pretty expensive, expecially for such old games. Kind of senseless when you could just boot into Windows those days. Those games go for $10 or less on the Windows side if you know where to look.
R

Those prices are a total joke.

Here are the prices on steam:

I hope nobody buys these overpriced ripoffs and waits for them to at least equal the steam price!

Good to see some more serious gaming options on the App store.

That's what I was thinking, it's a shame that these are old games that are SO pricey. Mac users really do get it bad when it comes to big game prices.
A

Great to see major gaming titles appear in the App store. It simply means more sales for the developers and more money to Apple.

What I dont get is you could still get a better bargain from Steam especially if it's a Steamplay supported game (that is, a game is available for both PC and Mac). E.g Bioshock has been out since 2007 for PC and I bought it for $5(sale). If Steamplay is supported I essentially get the Appe version for that price as well. Of course games dont have to support steamplay thus making the App store the easiest way to get Mac games.

On another note, who thinks Steam should be featured on the App store? Will Apple allow it?

Ruahrc said:
Those prices are a total joke.

Here are the prices on steam:

I hope nobody buys these overpriced ripoffs and waits for them to at least equal the steam price!

Borderlands: GOTY hit $10 on an Amazon Lightning Deal. Otherwise there are Steam's sales or maybe you will get lucky with a midweek or weekend one.
L

Ridiculous prices. You can get Bioshock for 10 bucks for Xbox 360 and PS3.

Might as well get these off of steam. Hopefully these will come to steamplay.
M

Did no one else remember that Apple is keeping 30% of the income of the games? They have to charge a little more if they want to still make the same amount. It's still higher than i think it should be, but it makes a little sense to charge more to make up for that. Still expensive though

so where is Bioshock for Steam?
B

Ridiculous pricing, what a joke
F

So much for the race to the bottom in app prices.

Has anyone noticed that the average app price has actually been rising the past few months?

A whole bunch of developers have woken up to the fact that they can make more total gross revenue by ignoring all the "should be $0.99" kiddies, and selling to customers who have money and are willing to spend more for good product.

miknees said:
Did no one else remember that Apple is keeping 30% of the income of the games? They have to charge a little more if they want to still make the same amount. It's still higher than i think it should be, but it makes a little sense to charge more to make up for that. Still expensive though
Click to expand...

Pretty sure Valve keeps 40% for games sold on Steam. Where's the Valve bashing?

Sure ain't coming from the developers, for either platform.

RichardBeer said:
All it is, is price gauging for old games that are inferior cider ports. They aren't even native, just a windows exe in a wrapper with a performance loss.
Click to expand...

Uh, AFAIK Feral has the games ported, they don't use Cider. Isn't Cider against the Mac App store rules, anyway?

Awesome! BioShock is really cool. I already played it and BioShock 2 on PS3, so its a little late for me, but for those who haven't played it, it is a must buy game (assuming you like first-person shooters with puzzles). Its great to see these huge titles coming to the Mac, keep them coming!!

All these new fangled games. Land sakes! Give me my Prince of Persia and Karateka which I still haven't beaten. Myst, Oni and Marathon! Real mac games.

Yes. I am jealous because my iMac's ATI HD2600 will probably start screaming "it hurts" and burst into flames if I try to play new games.

On to the subject. Publisher are coming to the App Store and Mac community. Good for us. How many titles are being ported to Linux by publishers. Zilch. Considering my first ramblings in the post, gaming on the Mac has come a long way and still has quite a bit of catch to match its pc sibling. But I'll gladly take the new offerings.
S

RichardBeer said:
All it is, is price gauging for old games that are inferior cider ports. They aren't even native, just a windows exe in a wrapper with a performance loss. It's a joke.
Click to expand...

Do you have references to back up the Cider claims? That would a dealbreaker for me. I got burned by a Cider game once, and probably won't be buying another ever again.