Teen-centric mac enthusiast site TheMacMind has posted what it says are 'confirmed details' of the previously-rumored flash based iPod. The site claims the flash iPod will be significantly smaller than an iPod mini (approx 2.5" long, 1.5" wide, and just .5" thick), have no screen, and have pricing set at approximately $99.

TheMacMind doesn't usually foray into the world of rumors, so it has no previous track record of accuracy.

NOVA, or Northern Virginia to the lay person.

No screen would equal no buyers. This can't be right.

An MP3 player with No Screen would be incredibly unusable. Navigation would be frustrating and long winded.

Perhaps a screen in the remote control?

The mock up looks good, but again, no screen - no usability.

I'm not saying I don't believe it at all, but I find it highly suspect.
S

Site seems down - anyone want to post the pics and story?
T

This seems very un-Apple -- navigate through 250 songs without a screen? Where is the excellent user experience? And I doubt that Apple could make much money on a $99 player, as the margins would be much smaller than for the HD-based iPods.

Sure, Apple might produce a flash-based iPod, but it seems unlikely to me.
A

I didn't know it was April 1st. No Screen. Come on!

I am definitely one who would purchase on the lower end of the pricing scheme. Honestly though, such a form factor is completely uninteresting to me. What I want is an iPod mini or iPod (the latter being the preferred) form factor and layout, with the cheaper memory to make a cheaper iPod. Bring it on!

for $99, no way it will be 1 GB. we have to remember, apple never does "cheap." most everything apple makes is full featured and seems overpriced. lack of the screen and $99 price fits neither, so i consider this highly suspect. (or wishful thinking... even though people claim apple is overpriced for "no good reason," they still want apple designed/made things for cheap, basically confirming that apple is doing the correct thing in pricing their products higher.)

I agree with the no screen posts meaning not usable. I also think that iPod name is valuable on any form but the scroll wheel system is also valuable. Probably need to stick with both to be a big seller.
H

No Screen? Maybe it is hidden.

Stumbled across this, almost at the same time as the "No Screen" rumor started.

Can't think a flip or slider would be cheap to manufacture for a 'lower cost iPod.'

Hmmm, would help with screen protection however, and be cool as hell. A slider iPod. Nice!

CD and tape players have managed to work without screen navigation. Although it does seem a little weird that an iPod would have no screen at all.
T

bartszyszka said:
CD and tape players have managed to work without screen navigation.
Click to expand...

And hold around 5% of what this device is supposed to.

bartszyszka said:
CD and tape players have managed to work without screen navigation. Although it does seem a little weird that an iPod would have no screen at all.
Click to expand...

CDs often indicate the the track number, which is good enough.

I'm sure it'll have a screen similar to those found on cheap pocket calculators. It'll just show the track number probably as well as the play/pause/forward/backward symbols. I don't think it'll be able to show the track name and I don't think making on the go playlists will be possible. BUT, this is Apple and I'm sure they'll surprise the heck out of us all if they put the same screen as the iPod on this thing. Also, this will probably get insane battery life.

This would be a great replacement to my iPod mini that my mother washed in the laundry machine. I'll take this to the gym for sure. For $99, I'll be the first to buy it (if it's for real that is).
M

Steve Jobs still insists users are not bright enough to master a second mouse button, how can he ever believe they will master an iPod with no screen!

I say let's start going through the MWSF line up of possibilities. A 1 GB iPod just doesn't seem right. IT may be nice for some, but selling someone a 1 GB MP3 player for X-mas then that person realizes that they have more thatn 1 GB of music seems a tad wrong to me, especially from Apple.

Besides why are we speculating on this and not the new Powerbooks or iLife '05?
O

Trowaman said:
Besides why are we speculating on this and not the new Powerbooks or iLife '05?
Click to expand...

Because an endless iLife demostration is almost a given at every MacWorld. "Look! New Themes! [45 minute demo]"

iLife makes me fall asleep at MacWorlds. I hope this is one of the good Keynotes. Let's go PBooks!

Not a conventional flash player, but something else?

This rumor is suspect. I'd expect a Flash player to be 2GB/500 songs minimum from Apple (to meet a standard of usefulness), even if that means it can't be released at a good price for a while. And I'd expect it to use the same form factor as the Mini, just like there are variations in the capacity/thickness of the other iPods. And if it WAS smaller than a Mini, I'd expect it to be thinner too. And of course, have a screen

The only thing this does possibly suggest to me, if there's SOME distorted truth hiding in there, is that Apple MIGHT be looking at the flash market in some new way that doesn't even compare directly to other devices. I can't think of a way that makes sense, but maybe this some new category of player entirely, in some totally unexpected direction.

More likely, their spy was just looking at the back

Trowaman said:
Besides why are we speculating on this and not the new Powerbooks or iLife '05?
Click to expand...

If you think there will be PB in the half of 2005 then you will be disappointed!
C

A 4 Gig MP3 Player as big as a business card?? Impossible.

Perhaps we should give apple more credit then just "NO SCREEN BOOo!" Do you really think they would release something that would be unusable? You know that products can get all the way to shipping but then be pulled (new newton.).

Steve knows what he is doing.


and did anyone get a screen shot of the 3d view? the site is down now

I cant access the story but here is the pic. 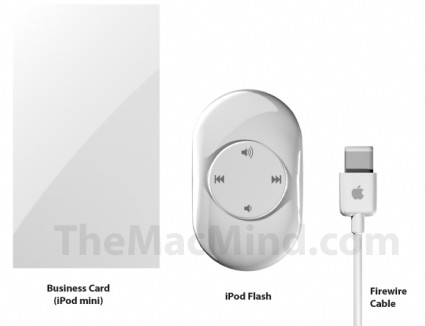 this is by far one of the most absurd rumors I've ever heard. Really not even worth commenting on but I'm bored and there hasn't been much to comment on recently.

$99??? Are you jokng? You know what you can buy at the Apple Store for $99? A big, fat NOTHING, except for maybe a couple of ipod accessories. Airport Express--$129. iSight--$129, bluetooth mouse--$69. So tell me how Apple is gonna managed to cram a 1GB flash disk, click wheel or some other interface, battery, firewire/usb, and the rest of the circuitry for $99.
C

frequeniquity said:
I cant access the story but here is the pic.

Here is the article:

TheMacMind isn't known in the Mac world as being the source of intel on the latest Apple products, however through an anyonmous tipster (to you! We happen to know this person is 100% valid), we've been tipped off to a whole bevy of facts about the new Flash-based iPod from Apple. We also had this confirmed by a second contact at Apple.

When I first heard about the iPod Flash, I met it with the same scepticism as Daring Fireball did.

AppleInsider brought you the basic concept, but TheMacMind is here to let loose about how the new iPod works, what it looks like, and how it feels! And we're looking forward to being there when it's released at MacWorld San Francisco! (Sorry Steve, we couldn't resist!)

The Meat: Milano cookie. That's the basic principle. I like Tim-Tams, but that's just me. Rounded edges, flat, and tiny. We're looking at something that is about 2.5" long, 1.5" wide, and just .5" thick.

Get this: NO SCREEN. Got a cellphone with one of those flat joysticks? This is apparently how you'll get around on the screenless iPod. Left and right move between songs, up and down change the volume, and pressing straight down will play/pause your music. With any other company, I'd be incredibly doubtful that their techs would be able to pull off anything useable. Scroll through 250 songs in one big list? We're betting Apple has something better up their sleeve, and we'll hopefully be able to tell you about the interface in the next few days. Evenything goes in and out through a full-size FireWire port. Apparently, they are also virtually indestructible. We did a mock up of the iPod Flash in 3D. You can see how big it is compared to a business card (the same size as an iPod mini) and an Apple Firewire cable.

What does that tiny size mean? Well, the iPod Flash is meant to be worn around the neck. Yep, a nice little lanyard will keep the smallest of the iPod family twirling around your neck while jogging.

AppleInsider said "less than $200", but we we're told that the Flash iPod will be priced at $99. Freaking sweet, we're hoping that that's right on the money! There have been reports of storage capacities from 256 MB - 1 GB, which would correlate with that price. This release will make an iPod available to people in any price range.