The Association of Flight Attendants (AFA) launched a lawsuit against the U.S. Federal Aviation Administration (FAA) last Friday in protest over the FAA's decision to allow passengers to use their iPads, iPhones, and other small portable electronic devices in nearly all phases of flight.

As outlined by the Associated Press (via TechCrunch), the lawsuit alleges that the FAA "acted improperly" and failed to follow proper protocol implementing the changes. A lawyer for the Association of Flight Attendants argued that portable electronic devices distract passengers from safety announcements and can "become dangerous projectiles." 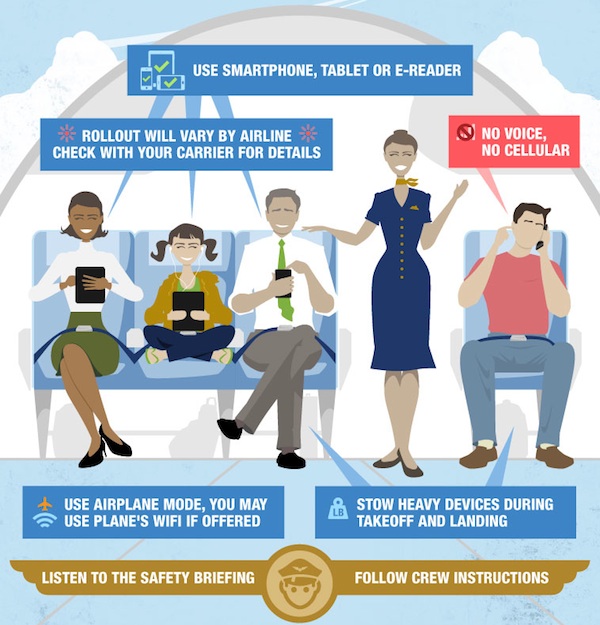 Dure argued that in greenlighting the expanded use of electronics, officials violated the federal Administrative Procedure Act. The act requires government agencies to give the public notice and the ability to comment when a rule is changed. That didn't happen properly, the union argues.
Click to expand...

FAA lawyer Jeffrey Sandberg responded to the AFA's allegations by suggesting portable electronic devices are "no more dangerous" than the books passengers have been allowed to keep out during landing and takeoff. The government agency also suggested that the policy change did not trigger the requirements for public notice.

Officially implemented in October of 2013, the FAA's policy change on portable electronic devices allows smaller electronics, like iPhones and iPads, to be used during all phases of flight. Prior to the rule change, all electronics were required to be stowed away until an altitude of 10,000 feet was reached.

Though devices can now be used during landing and takeoff, passengers are still required to place them into airplane mode, restricting cellular access. Usage of larger devices, like laptop computers, continues to be restricted for safety reasons.

While the FAA enacted the policy change that allows passengers to use their devices in all phases of flight, airlines have always had control over the implementation of the rule. Individual airlines, as the FAA points out, have control over when and if passengers are able to use their electronic devices in flight. A judge hearing the case expressed a similar sentiment, telling the AFA that "Airlines have always had discretion on how to handle this."

Thus far, the FAA has cleared 31 airline operators to allow passengers to use portable electronics during landing/takeoff and combined, those operators carry 96 percent of all U.S. commercial passengers.

This doesn't even make sense... Few really listened to the safety briefing anyway. Many people read a magazine or even SkyMall. Device or not if you want to pay attention you can. If you don't want to listen you're not going to.

I LOVE that I can finally get a full episode of one of my TV shows watched during a 1 hour flight, instead of wasting half the flight waiting for permission to get out my iPad.
Z

How many times do we have to listen to the safety brief? do they think we are stupid and didn't listen the first few times we flew?
J

Why do flight attendants care anyway? Do they really thrive on the additional task of continually telling passengers to put away their devices or put in airplane mode?

They obviously just want to force passengers back into reading SkyMall during landing and takeoff. Sales must be down.

They should pull a classic move from Sci-Fi movies and take over the displays of every device on-board.

Those super-heated moist towels pose a far greater danger to air travellers than electronic devices.
A

AFA vs AAF vs AFF vs FFA vs FAF vs FAA

Wants to disallow use of cellphones on flights because they might "become dangerous projectiles."

This is so stupid. They don't want to allow electronics because they could become projectiles. Great. What about people who are allowed to carry babies on their lap, and regular books? I fly frequently and if they go back to not allowing iPads on takeoff and landing I'll be sure to unpack a full King James bible or a full unabridged dictionary to "read" on takeoff and landing, since technically they're legal.
S

No one likes this rule and the only ones for it are flight attendants desperate to keep it active to show that their job actually has a meaning. Next, they will try to ban robotic drink carts.
C

Couldn't my device still become a "dangerous projectile" even if it were turned off?
K

Can’t really appreciate the association’s substantive criticisms either. It’s definitely true that passengers are already allowed to keep devices and books in their hands on take-off, so there is no additional risk if the device is on. As to the security briefing, I notice that most people don’t pay attention to those either after a few flights and they don’t stop passengers from reading either (especially the advertisements).

What are they actually worried about?
Z

I just can't understand how it is so hard for somebody to stow away their gadgets for the first and last 10-15 minutes of the flight.
K

You won't put this genie back into the bottle. The EU just allowed the use of electronics in all phases of the flight, whether or not in Airplane Mode.

Damn unions....let me listen to my music while taking off. I've heard the stupid safety speech about a million times....I could likely tell you exactly where the life-vests/rafts are located on every type of plane across American Airlines' entire fleet.....
M

Wow, it's almost like they derive pleasure out of telling you to put away your electronic devices.
J

It is *not* just about the safety briefing.

What if something does go wrong during takeoff or landing - the most common time for something to go wrong?

Will you pay attention if you are engrossed in your cocooned personal world?

Of course, some idiot is always going to walk into a manhole or off the edge of a cliff because they are not paying attention while staring at a little screen, but we can't help those people. We can try to make sure that people are alert and paying attention to any instructions or information during takeoff and landing.

Plus, it is just plain rude. The flight crew is going to come though and make sure everybody has their seat belts on, for example. They should not have to take the extra time to get your attention for that or any other purpose.
Z

SoupyFlow said:
No one likes this rule and the only ones for it are flight attendants desperate to keep it active to show that their job actually has a meaning. Next, they will try to ban robotic drink carts.
Click to expand...

Go ahead, you go on your next commercial flight without flight attendants. We'll see how safe you feel.

I hate the safety briefing, like we all do, I suppose. We all know where the exits are, we all know what a tube with a facemask on the end is for, and we all know how to use a seatbelt. However, if I can zone out on some music and pretend I am not on an airplane, then I'm a much happier flyer. Doesn't that make me unique?
F

No reason to encourage even more passengers to ignore the safety briefing. I don't want idiots blocking my way to the exit if something in the plane catches fire. (I know of people who've died in car fires, and a jet holds about 1000X more fuel!)

Last time I flew, they still asked us to stop listening to music and watching videos during the safety announcement at least. For me it really makes a difference to be able to use them during takeoff and landing, since I could never ever watch a whole typical 2 hour movie over a 2 hour flight, while now I can. If you fly a lot, it's great to be able to watch full movies since flying gets boring very fast, and listening to music is quite painful unless you have noise cancelling headphones.
G

Yeah, I don't get it either. A projectile is a projectile, electronic or not. That argument makes no sense. I kind-of-sort-of accepted the 'it might interfere with the navigation equipment' argument... but that was shot to hell when airlines started offering paid WiFi. Um, no, sorry, why is WiFi suddenly SAFE just because I'm paying you for it?

I really think this is one of those rules that's been around so long, no one wants to admit it was stupid in the first place, so no one wants to be the one to admit it needs changing.
You must log in or register to reply here.
Share:
Facebook Twitter Reddit Email Link
Register on MacRumors! This sidebar will go away, and you'll see fewer ads.
Sign Up
Top Bottom