Florida resident Thomas S. Ross has filed a lawsuit against Apple this week, claiming that the iPhone, iPad, and iPod infringe upon his 1992 invention of a hand-drawn "Electronic Reading Device" (ERD). The court filing claims the plaintiff was "first to file a device so designed and aggregated," nearly 15 years before the first iPhone. 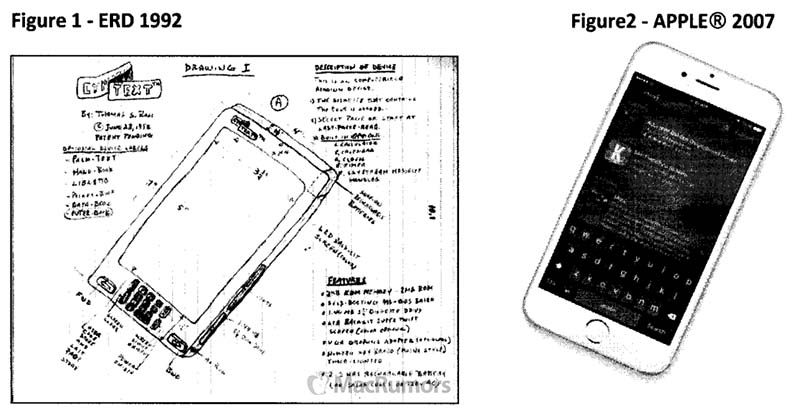 Between May 23, 1992 and September 10, 1992, Ross designed three hand-drawn technical drawings of the device, primarily consisting of flat rectangular panels with rounded corners that "embodied a fusion of design and function in a way that never existed prior to 1992."

What Ross contemplated, was a device that could allow one to read stories, novels, news articles, as well as look at pictures, watch video presentations, or even movies, on a flat touch-screen that was back-lit. He further imagined that it could include communication functions, such as a phone and a modem, input/output capability, so as to allow the user to write notes, and be capable of storing reading and writing material utilizing internal and external storage media. He also imagined that the device would have batteries and even be equipped with solar panels.
Click to expand...

Ross applied for a utility patent to protect his invention in November 1992, but the application was declared abandoned in April 1995 by the U.S. Patent and Trademark Office after he failed to pay the required application fees. He also filed to copyright his technical drawings with the U.S. Copyright Office in 2014. 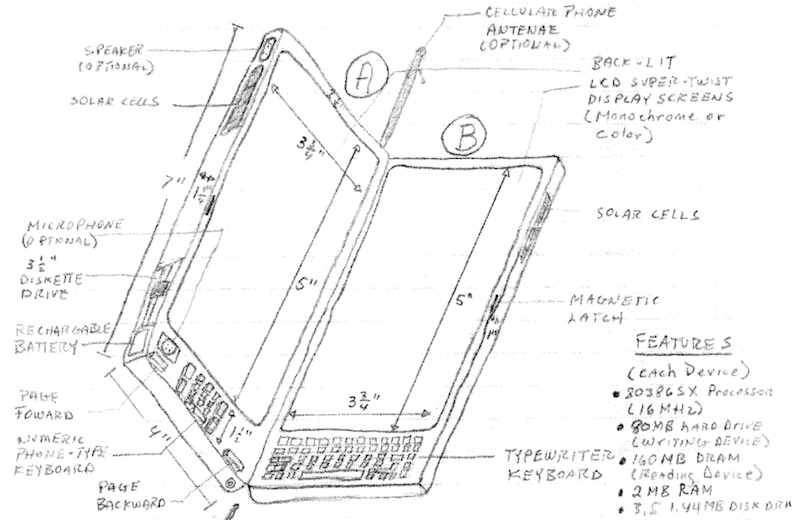 While the plaintiff claims that he continues to experience "great and irreparable injury that cannot fully be compensated or measured in money," he has demanded a jury trial and is seeking restitution no less than $10 billion and a royalty of up to 1.5% on Apple's worldwide sales of infringing devices.

Lol. Dude, not even close.

Only Suing apple? Why not Android manufacturers as well?
Reactions: shanson27, Avieshek, nkerber and 26 others
S

The mother of all "Florida Man" stories.
Reactions: augustrushrox, Krafty, tongxinshe and 91 others

Give me 10% and I'll be a witness in your favor in this ridiculous lawsuit.
Reactions: Avieshek, nkerber, djbuddha and 6 others

I don't think this will go far... That drawing reminds me of old Palm or Window based PDAs.
Reactions: sundragon

80386sx proc, WOW that brings me back to some old times. How the heck that would work in a phone is beyond me. These drawings seem much more like windows PocketPC/CE phones if anything, especially the ones with the slideout keyboards.
Reactions: duffman9000 and mburkhard

Thanks, I needed a good laugh!

Florida got no chill, they say on the internet.
Reactions: Avieshek, t1meless1nf1n1t and Vanilla35

This won't even come close to transpiring. He's hoping to make a quick $30k settlement and have this thrown out. That won't even happen.

Back to work you go Florida man to your 9-5 job.
Reactions: Avieshek

MacRumors said:
Ross applied for a utility patent to protect his invention in November 1992, but the application was declared abandoned in April 1995 by the U.S. Patent and Trademark Office after he failed to pay the required application fees.
Click to expand...

And there's your answer, folks.
Reactions: the8thark, eduardoregueiracampos, Douglas B and 6 others
C

Looks more like Samesung!! I knew they were copiers!


Though seriously he abandoned his patent as he didnt pay... Same thing happened with an iPod

And Florida Man promises he never, ever watched "Star Trek" or "2001: A Space Odyssey" prior to drawing his contraption.
Reactions: ChristianVirtual, Avieshek, Uunnkknnoowwnn and 34 others

this looks like Palm Pilots or other such devices way back when they were 1-color screens. I mean most cell phones over the years had a similar look with keyboards too.
Reactions: Avieshek and CarlJ

Valley of the sun

"Ross applied for a utility patent to protect his invention in November 1992, but the application was declared abandoned in April 1995 by the U.S. Patent and Trademark Office after he failed to pay the required application fees. He also filed to copyright his technical drawings with the U.S. Copyright Office in 2014."


HA HA and this is the reason this shouldn't even be allowed to go to court. Guess what a small company forgot to patent dos as well and it worked out fine for MS. This guy is an idiot.
Reactions: nkerber, TruthWatcher412, r00fus and 2 others

... am I reading this article right? Because it sounds like he filed a patent that was later declared abandoned because he didn't actually pay to process his filing. He also failed to register a copyright on the design so he has no copyright nor patent claim on the designs.

So what is his lawsuit over, exactly? It sounds like he has no legal path toward any infringement claim.
Reactions: Avieshek and nkerber

Prediction for this thread:

Another thread where it would be an old Apple patent or Apple drawing in which Apple is trying to challenge someone for bringing something they drew or patented to market: 633 votes for Apple, 8 votes for the other entity.

At least, we're consistent around here
Reactions: castlerock and apolloa
A

Ross applied for a utility patent to protect his invention in November 1992, but the application was declared abandoned in April 1995 by the U.S. Patent and Trademark Office after he failed to pay the required application fees.

Pretty sure this will be an open and shut case. If he never actually got a patent, he can't really sue about it. I drew lots of stuff in elementary school that my mom has saved, wonder if I can sue based on a drawing from 1981?
Reactions: eduardoregueiracampos, nkerber, Apple4everr and 3 others

FloridaMan! -- the worst superhero
Reactions: nkerber, Wondercow, ohio.emt and 3 others

Sounds to be like he copied Apples design...from Wikipedia:


"An early device in the PDA category – the Newton originated the term "personal digital assistant" – it was the first to feature handwriting recognition. Apple started developing the platform in 1987 and shipped the first devices in 1993, production officially ended on February 27, 1998."​
Hmm...that sounds like 5 years before this bonehead filed his patent.....
Reactions: xanderbear, the8thark, Douglas B and 16 others