A web developer and graphic designer has created a fully functioning touchscreen "Apple Mirror", offering a reflective look into an imagined future where Cupertino builds smart screens for the home.

New York-based Rafael Dymek created the mirror as a personal project, aping elements of iOS 10 to augment the interface, which appears to run off the back of a modified desktop touchscreen OS. 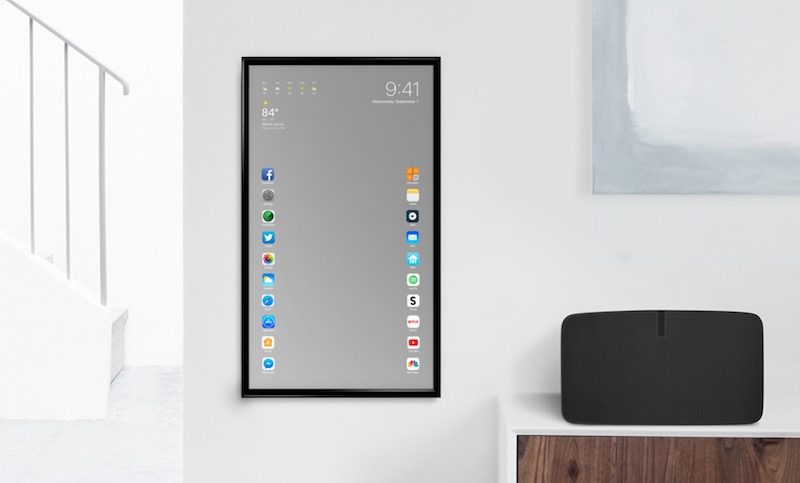 The "Apple Mirror" features the date and time in the top right corner and a weather forecast in the top left. Beneath these sit several working iOS app icons which can be rearranged with the drag of a finger.

A tap opens the apps in the familiar manner, albeit in a windowed mode, although this does allow for easy multi-tasking. Dymek demonstrates some of the possibilities of his modified Apple interface, which include the ability to request an Uber, watch Netflix, read the news, control a Nest thermostat and smart light bulbs, control output to a Sonos speaker system, and more.


After 45 seconds of inactivity, the interface goes to sleep and the touchscreen looks like an ordinary mirror, while a simple tap resumes use. Check out the video to see it in action.

Been done before 2.5 years ago with a raspberryPi (https://www.raspberrypi.org/blog/magic-mirror/)

As usual there is nothing new here except the price will be x10 on the Pi version because Mac.....
Reactions: Zaren, idmean, adib and 4 others

Cool concept. Is there an app for self-cleaning?
Reactions: idmean, adib, ohio.emt and 2 others

Wiping the fingerprints off that would be annoying as lol
Reactions: prasand and drumcat

well done, though the app icon placement could be less intrusive. Also, though iOS is not really a widget-based system, the smart mirror should use more rather than icons. But I imagine the mirror interface will evolve.

Went to the site and saw that the icons could be arranged as a dock along the bottom edge. Which is more familiar / less intrusive. A two by two grid in the left and right corners to pull it from the visual center without encroaching the vertical space, or a app drawer (app folder) in the bottom right or left corner to show apps only when needed, and a frameless design would be nice. But I'd buy the white frame version in a heartbeat.
Last edited: Nov 24, 2016
Reactions: needfx

cool concept indeed, but how much time do you spend in front of the mirror?
maybe it's a product directed to a specific gender cough cough
Reactions: Peace and davester
O

That would be good in a hotel bathroom
Reactions: davester
S

The only place that I would find a use for this is in the bathroom. Open a news app while I'm brushing my teeth, reviewing my calendar for the day, checking the weather. However for an estimated $800-1,300 the cost wouldn't justify the purchase. Cool concept though.
Reactions: alecgold
A

The problem with this and even the Apple Watch and a bit with the iPhone is the lack of intelligence for displaying pertinent information. The mirror should tell me if I need an umbrella or how many layers to wear. It should remind me if I have an important meeting or a date or if it's photo day, so I pay a bit more attention to my appearance. It should know what I'm watching elsewhere in the house and continue it on the mirror if I didn't pause it when I got up. And Siri needs to get way smarter and more useful.
Reactions: Koodauw, ohio.emt, prasand and 2 others

Looked in the mirror a while ago and it was not great. Not buying this crap.
Reactions: Beavix, Oblivious.Robot, Skoua and 4 others

Instead of putting fingerprints all over the mirror, this would obviously be the right place for Siri. If Apple wants to do something like Alexa/Echo, doing it in form of a mirror like this actually sounds like a nice idea. Don't need an active display all the time but if it wants to show information like the weather report, then it can do it as shown in this concept.
Reactions: zsbradt, mrgraff, Oblivious.Robot and 4 others

Looks like a pain in the butt.
Reactions: needfx
N

Brilliant. It's great when someone comes along and turns an idea into reality. Hope I'm still around when this becomes a consumer product.
D

Would be neat to have smart panels in the house sometime in the future.

I'd imagine this one would say several phrases
What else would it say?
Reactions: adib and kdarling
N

dilbert99 said:
Would be neat to have smart panels in the house sometime in the future.

I'd imagine this one would say several phrases
What else would it say?
Click to expand...

In my case: Jeez, have you looked in the mirror recently?
Reactions: alecgold, t1meless1nf1n1t, kdarling and 1 other person

dilbert99 said:
What else would it say?
Click to expand...

Not going to happen. People don't replace their mirrors every 3 years with another disposable mirror. Cool it is, outside the box it is, its just not in Apple's core competency of making products to fill landfills.
M

Not a really rethought interface... and this project is already 2 years old: https://www.raspberrypi.org/blog/magic-mirror/

It would be a great product if you could control it with your voice as well as with your fingers.
Reactions: netwalker

You're installing it wrong
Reactions: nnoble

Seemed like a cool idea at first, but upon reflection I'm not so sure.
Reactions: macgabe, xraydoc, Mike Oxard and 12 others

Not everything you've seen in a sci-fi movie is a great idea in real life. Steve Jobs was such a great product guy, because he instinctively knew what would and what wouldn't work on a daily basis.
Reactions: mdelvecchio

There are better ways to interact and control things than from a mirror...i.e. smartwatch/phone/voice. Why would I want to walk up to a mirror to do it?

Watching videos on a highly reflective surface is obviously not ideal - it's bad enough seeing my ugly mug reflected back in the iPad screen, let alone a mirror!

I just think it would only be useful for getting quick feedback on things like the weather, time, breaking news, stocks etc. I'm not sure that would be worth the cost.

Really, you have to think about whether developing something like this would enhance/benefit the user beyond what other tech can achieve. Despite how cool it looks, I'm not seeing that there's a big enough advantage.

Sorry to be so negative.

How would Jony make it thinner though?


applepuree said:
That would be good in a hotel bathroom
Click to expand...