Thomas Park has put together an interesting gallery of storefront photos from all 357 of Apple's retail stores around the world. While the photos are simply pulled from the individual retail store pages on Apple's site, the gallery format ordered by date of opening makes for easy browsing and examination of the evolution of Apple's store designs. Some of the stores have of course been renovated over the years, but many of the early stores still retain their original exterior appearance. 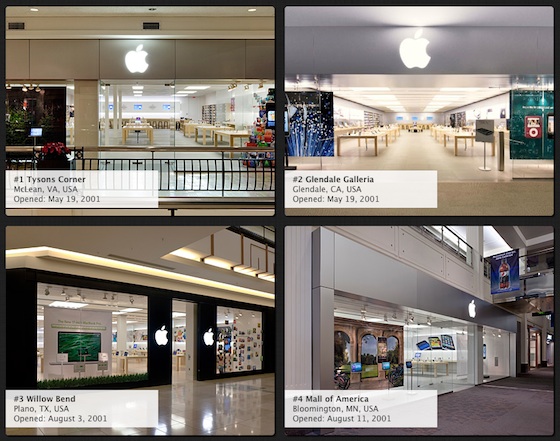 As Park notes in a blog post about the project, Apple's store designs have in fact come a long way in the ten years since the Tysons Corner and Glendale Galleria stores launched Apple's retail initiative.

At the time, most analysts considered Apple's fledgling retail initiative to be doomed. But though Tysons Corner seemed like a modest start, it was a blueprint for big things to come. 357 stores and counting later, Apple is tops in sales per square foot, and they did it by applying many of the same principles as they do to their products: natural materials, understated aesthetics, and daringly innovative processes.

Anyway, one thing I wanted to do was go back and see how Apple storefronts have evolved over the past decade. I couldn't find anywhere to do this easily, so I decided to create a gallery myself.
Click to expand...

All 357 images are displayed on a single page, although users can filter by country to show only those stores located in each of the eleven countries where Apple operates retail stores.

Of the 357 total retail stores, six are currently without storefront images. Five of those stores (Soho, Somerset, Pasadena, Knox Street, and Ala Moana) are currently being renovated and/or expanded, with Apple operating temporary stores nearby during construction. The sixth store, Victoria Gardens in Rancho Cucamonga, California, recently moved to a new location within the shopping center and the store page has yet to be updated with an image of the new store.

Seems to be getting slashdotted right now - hope he's not paying for this bandwidth!

Yea I don't see any images on the page anymore. I guess I'll check it out later
I

Wish the pics would load.

The Canadian stores all look the same, with the exception of St. Catherine in Montreal. Hahahaha. Guess we're stuck in a style cycle?!

Very cool, I have been waiting for something like this.

I used to go through each link on the retail stores page to see a picture.

Now, it's given to me in a gallery!

I didn't see the Boston Boylston street one while looking through the gallery though... I must have skimmed past it.
A

I didn't see the Boston Boylston street one while looking through the gallery though... I must have skimmed past it.
Click to expand...

Looking at the progression of the design -

Undoubtedly, the foreign countries get the prettier stores. I'm jealous!

Wish my city had a stand-alone store. I hate going through the mall to get to any of the three in my local area. (not complaining, though - I know some people don't even have one anywhere near them)
I

I found at least 1 error, so I assume there may be more. #92 Oakridge San Jose, CA store is not that big and is no where close to looking like that it actually looks like #270 Oakridge Mall Vancouver, Canada. Guess they got those two mixed up.

At least around here the Apple Stores get such a high $sales/area because they are all too small! They could all use a doubling of size. Or maybe the crowds make people more anxious to buy so they don't miss out?
A

Wish my city had a stand-alone store. I hate going through the mall to get to any of the three in my local area. (not complaining, though - I know some people don't even have one anywhere near them)
Click to expand...

I live in an area that has quite a few Apple stores, but they are all in malls as you pointed out.

I would love visiting Millennia Mall though (where you are).

I went to the very first one at Tysons and again at Pentagon City. Hard to believe there are so many in the Metro DC area.
X

It's not the data the picture was taking. It's when the store opened. The pictures could have been taken at any time
L

fenderbass146 said:
It's not the data the picture was taking. It's when the store opened. The pictures could have been taken at any time
Click to expand...

And in fact, 3 of those 4 have been heavily remodeled in the decade since they opened. All four would have looked like the Willow Bend store, with the black pillars and the Apple logos on each side of the door.
Reactions: thomasdangit

Let's see if you can parse out your mistake...
L

collecting a gallery is easy, now try this

Pasting together a gallery from Apple's pictures is easy. The real challenge is to get a picture of yourself in front of each of these stores within your lifetime (photoshopping yourself in doesn't count). I'm only at about 12 stores in my photo library... with many many more to go.

Pick an Apple store, get a plane ticket, and go!!!! Hey, this sounds like premise for a reality TV show... to follow a crazy Apple fan on his or her quest to visit each and every Apple store. Of course, there probably isn't much drama or conflict like the other shows on TV.

Very cool. I like how the majority of the storefronts are unique in a subtle way.