Amid persistent rumors of substantial upgrades, the current Apple TV is beginning to show its age, losing ground in the streaming media device marketplace to rival Google Chromecast and Roku in the first three quarters of 2014, according to market researcher Parks Associates as reported by CNET. Apple's decline comes at a time when interest in streaming media devices is on the upswing, with 10 percent of households buying at least one media player this year.

Despite a decent drop in market share over the past year amid increased competition, Roku remains the leader among set-top boxes and streaming media sticks, accounting for 29 percent of the market in the 9-month period, down from 46 percent in 2013. Google's Chromecast stick had a strong showing in 2014, climbing to the number two slot with 20 percent market share and knocking the Apple TV down to number three. With 17 percent share, the Apple TV remains in front of Amazon's Fire TV and Fire TV Stick, which together accounted for 10 percent market share, although the Fire TV stick is just now rolling out to consumers. 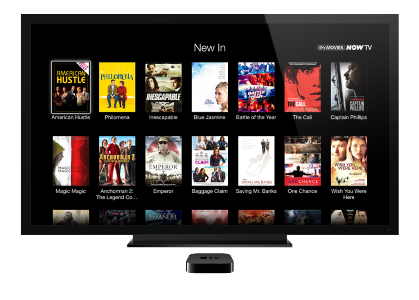 The Apple TV was first introduced in 2007 and has been updated periodically during its seven-year lifespan. It currently remains in its third generation with the last major hardware update released in March 2012, followed by a minor revision in January 2013. Multiple rumors this year hinted at a refreshed Apple TV hardware with App Store integration, Bluetooth controller support, and more, but those rumors have yet to pan out. Though its Apple TV hardware has been essentially unchanged for over two and a half years, Apple continues to make improvements to the software and add new channels to the Apple TV lineup.

Not surprising. I'm still waiting for whatever Steve Jobs said he "cracked" with television. The ATV certainly isn't it. I use it to stream my iTunes stuff, but that's about it.
Comment
G

Well, update the $%$# thing with something new/useful. Otherwise, a $30 stick that does everything you do for $99 is going to take market share from you.
Comment
T

As they've said, they don't even advertise the Apple TV, so this is to be expected.

I wonder what will happen when/if Apple show it some love with a major upgrade.
Comment

If they'd spent less time on yearly iOS / OS X releases, we might have had an Apple TV app store by now.
Comment

It's a $25 device. It should be outselling the Apple TV. I bought one just to have one. Didn't hurt my pockets at all. The Apple TV is hands down better than the cromecast though.
Comment

The only reason why i still use my my atv is because of my itunes movies and season passes. if it wasnt for that i would use my chromecast full time.
Comment
O

It would be interesting to see stats how many Chromecasts are actively in use. I am pretty certain most chromecasts are collecting dust.
Comment
N

You can get a Chromecast for $23 right now, Amazon Fire Stick and Roku Streaming Stick for $39.
Comment
D

Apple TV really is a nice product. Apple should spend a little more effort updating and improving it.
Comment
T

I would buy one, but the Chromecast and Firestick are cheaper and more elegant. Apple is lagging on this and other areas unfortunately. Another missed opportunity for them.
Comment

Except for AirPlay Mirroring and a few other minute offerings the Apple TV is pretty bad at being a media player. Even when hacked it comes terribly short of the Roku.

Many SmartTVs have built in features that blow the thing out of the water.

I mean, Netflix on the ATV just recently got auto play.

I have the ATV in the kids room only because I can control it from my iPad or iPhone . . . but I can do the same thing with a Chromecast.
Comment
Z

So upsetting that Apple still is leaving this device largely abandoned. And Airplay has been SO BAD since iOS 8. Really problematic.

When the Apple TV was released alongside the announcement of the iPhone, I was hoping Apple had big plans for it also. It's a real shame since there is so much potential.
Comment
F

I have a few questions about the Chromecast:

We have iPhones, iPads, Macs, and a Windows laptop. We do not own or use iTunes content in any way. We do torrent TV shows and use Air Video HD to AirPlay over to the Apple TV with great success. We also have an Xbox One but in general I find the apps on the Apple TV better and the local streaming more reliable and simpler. I also regularly Airplay Spotify and random web videos from one my devices to the Apple TV. I quite like that Airplay is built into the OS vs. each app.

How well does a Chromecast work for an Apple household like us? I'm assuming each app needs to support the Chromecast individually. Doesn't seem that Spotify does.

Is anyone surprised? The chromecast cost a third, and is more portable and "seen but not heard", while offering the same core functionality of the Apple TV.

The Apple TV also hasn't seen an update in years. I'm thinking we'll see new hardware and an OS overhaul that will offer functionality the competition cannot match in 2015, but until then, the competition is even across the board.

I use Apple TV for mirroring and AirPlay, but even that has been somewhat unreliable recently.
Comment

GuitarDTO said:
Well, update the $%$# thing with something new/useful. Otherwise, a $30 stick that does everything you do for $99 is going to take market share from you.
Click to expand...

I really wish Apple was pushing harder into this market. They have really let the AppleTV lag. I thought by now they would have least opened up API's and the App Store for it.
Comment

So upsetting that Apple still is leaving this device largely abandoned. And Airplay has been SO BAD since iOS 8. Really problematic.

When the Apple TV was released alongside the announcement of the iPhone, I was hoping Apple had big plans for it also. It's a real shame since there is so much potential.
Click to expand...

To this list I'd add bug fixes. My Apple TV's audio cuts out randomly when I haven't used it in a few hours, and the only fix is restarting it. It's been this way since the last update.

Chromecast sucks though. At least for iOS. Stream something, close the app or lock your phone, open it back up to pause or play something else and the Chromecast is disconnected from my device. Every. Single. Time. Fire TV Stick all the way and my Sony TV has native casting support. Hit the same casting button, switch to the Sony, and it works a million times better.
Comment

My friend just told me last night he won't buy one until they update it, I guess other people are thinking the same thing.
Comment

I have the chromecast, ATV, and the new Fire TV stick and price not withstanding, chromecast is my favorite hands down.