Google is testing a dark mode for its desktop search website that responds to a user's system display setting, a move that may have gained traction to alleviate eye strain issues for people working longer hours from home. 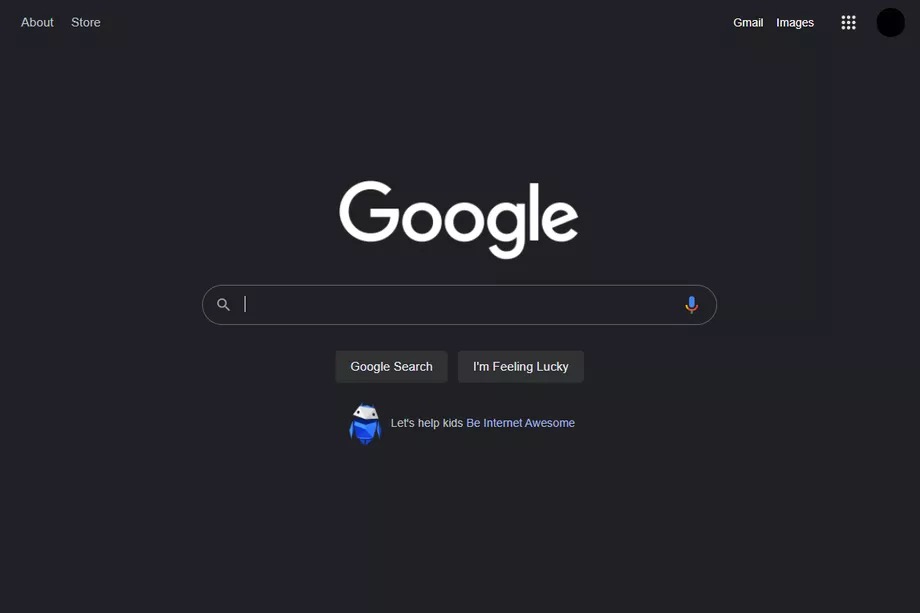 Images via The Verge​
The test appears to have limited rollout at the moment, but as the images show, the very dark gray theme extends not only to the Google homepage but search results, too.

It's unknown when dark mode for desktop search could be officially rolled out globally. "We're always testing new ways to improve our experience for our users, but don't have anything specific to announce right now," Google told The Verge.

It's not the first time we've seen dark mode appear on Google's desktop search, either. The feature appeared for some users back in December, but then quietly disappeared into the internet ether. 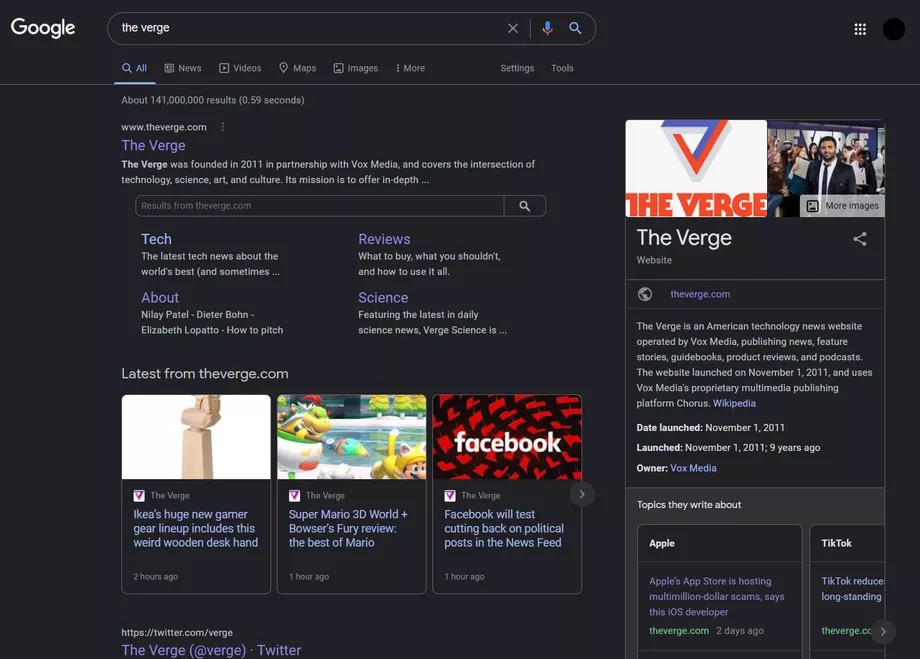 Apple introduced Dark Mode way back in 2018 with macOS Mojave and iOS 13, and support for the system-wide option is now a staple feature of most native and third-party apps on both mobile and desktop.

But as we learned from Google's protracted stop-start efforts to bring dark mode to Gmail, there's no saying when or even if this change will ultimately see the light of day.

However, there are alternative methods available for getting rid of the plain white background on your Google searches. One of them we like is the browser extension Dark Reader, which is available for Safari, Chrome, Firefox, and Microsoft Edge.

How about a system dark mode for the YouTube app. ??‍♂️
Reactions: arrowmouse and martyjmclean

Yet another reason why I've been using https://duckduckgo.com for quite some time now.
Reactions: CodeSwiftUI, tacomahunter, tisabmw and 16 others

I tried to change it yesterday. For some reason it wouldn't let me save my changes.

Today I tried it and....yay! It finally worked! Though I don't know why it has taken them so long to implement it. You'd think it wouldn't be all that difficult to do.
Reactions: KeithBN

Oh it’s about time! I hope Bing mangers read this as well or any other search engines & website owners ?
W

Slow news day. Kinda get the sense that Apple has doubled down on secrecy with all these impending (March/October/whenever) products.
Reactions: DocMultimedia and LFC2020

I am not a tech professional so I don't understand why the hell is taking months to test something with a black background anyway? Same with other apps like facebook etc...
Reactions: pizzzle, CodeSwiftUI, nortonandreev and 9 others
0

Such useless search anyway, always polluted with amazon and ebay results, stupid because it includes and prioritises USA companies in results when it is set and told to search only Australia, news google is so dumb it repeats exactly the same articles 3 times, many of them useless because of subscription, so dumb it thinks when i click local news is always Sydney when my IP is on the other side of the country only gives me Melbourne as other choice and need an account to change to something else.
duckduckgo have dark for years, google are slow learners.
Reactions: dubar
A

Seriously Google why does this take so long to implement? But tbh I'm happy with duckduckgo.
Reactions: Cicciorino and yaxomoxay

svanstrom said:
Yet another reason why I've been using https://duckduckgo.com for quite some time now.
Click to expand...

I find I get quite a bit of lewd results using duckduckgo even for things that shouldn't relate at all... Otherwise I find it to be a very serviceable alternative to Google, and it has an image search that isn't a UX nightmare.
Reactions: tonyr6 and yaxomoxay

I want to support duckduckgo, but to me, over the years, the results are still not as good as google's. Especially for more technical stuff.
Reactions: tonyr6, bwintx, ZZ9pluralZalpha and 3 others
S

Too many people need to green light every single little change...
Reactions: michaelnugent and Gatto37

Yes, this always struck me as funny. Is there some big technological leap about a black background that requires months of field testing? Lol!
Reactions: ZZ9pluralZalpha, dubar, michaelnugent and 2 others

Smartass said:
Too many people need to green light every single little change...
Click to expand...

Kabeyun said:
Yes, this always struck me as funny. Is there some big technological leap about a black background that requires months of field testing? Lol!
Click to expand...

I guess Google wants to be really sure that Dark Mode doesn't negatively affect the frequency of paid search results being clicked.

And who knows... human behaviour is often unexplainable, deeply irrational and weird.

Secondly I think and hope Google will want to know how people find the experience over all (e.g. white text on a dark background is well known to make reading harder).

I'd be curious to know what their testing has shown. Does Dark Mode have any effect on behaviour? And if so what happens?
Reactions: michaelnugent, Mustafa. and Santiago

What's to test? It's a dark mode just release it lol.

Dark mode sounds easier than it is.
White is the default background, that is used for everything almost.
Once you switch that to black you have to double check if each and every element and color doesnt "disappear" or is hard to read.

And the second difficult thing is that dark mode is not uniform or homogenous throughout the internet.
How many times do you expect , you will be greeted by subsequent dark mode website , when you click on a search result link on the black google site?

The alternating between black and full white can be quite inconvenient.
another example: you use a reddit app in darkmode and you scroll through some memes in the middle of the night when you are in bed...... And then you see some people post memes from twitter (as screenshots) with white background....

Dark mode has a long way to go. Its not a simple switch. Especially as long as there isnt some AI solution to "defuse" those white background .jpgs and stuff.
And even if those image files have transparent backgrounds. most of the time you will see a hideous white outline / contour whatever you call it.

And then of course you need to invert dark colors. Most obvious one is black. For example if you have some sort of Graph in black color, black arrows, lines and text in an image.
Like I said. Mostly everything is designed with a white background in mind.
C

Impact on advertisement clicks is a good point (though it does not prevent user from using Dark Reader and others).
From a developement point of view, dark mode is not « just black background lol ». Google has a lot of pages and search widgets (for instance the verge information on the right in the screenshot, there are hundreds more different widgets) to take into account. You don't expect a design bug in Google and they will roll out dark mode in all search pages and not juste the home so updating every page and widget design is tedious from a coder perspective, a UX perspective and QA perspective.

Well, I'm on board with a dark theme across G Suite apps..., But can we get their notifications working I mean if watch a Youtube video on desktop or iOS on either device I still have the notification to watch a video. I mean Gmail has this working. WTF!!!!

zzzzzzzzzzzzzzzzzzzzz....... Having been around long enough to witness and help roll the transition from terminals running green text with two choices of brightness to windowing interfaces with light "desktop" background, the fascination with dark mode escapes me! Going from DOS prompt to Apple's Finder was a revolution!

... in the before-time, from the great-long-ago.